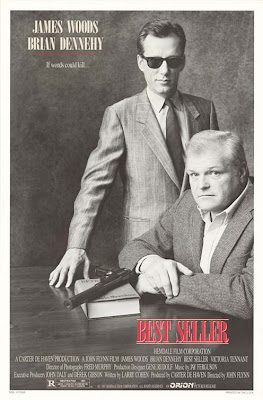 Directed by John Flynn and written by fan favourite Larry Cohen, 1987's Best Seller hits the ground running. Opening in 1972, with an armed robbery on a police evidence depository, that turns brutal when the robbers needlessly kill all the cops on duty with the exception of Dennis Meechum (Brian Dennehy) who despite being wounded manages to fight back and stab one of the robbers. Flash forward to the present day, Meechum is still a cop but is also an author, having written a best seller based on the robbery he was involved in. Struggling with writers block since the death of his wife, enter Cleve (James Woods) a vicious, sociopath in the form of a sharp dressing hitman. He knows all about Dennis and his problems and comes to him with an idea for a book guaranteed to be another best seller. Based around his work for Kappa industries, a powerful corporation grown by David Madlock (Paul Shenar), who used Cleve's talents to grow the company. Madlock has put Cleve's nose out of joint, and as punishment Cleve wants to bring the whole corporation down. Meechum is sceptical at first but as the pair delve deeper into the conspiracy, it becomes clear to him Cleve is telling the truth. 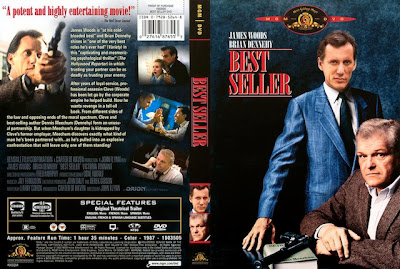 Best Seller's strongest asset is the electrifying presence of James Woods, his portrayal of Cleve adds much needed complexity to the character and the film itself. Woods is so perfect, it's hard to imagine any other actor playing the role and it would be interesting to know if it was written specifically for him. His mix of malevolent charm, manic intensity and viciousness making for a very memorable character. Ably supported by the always solid Brian Dennehy, the two make a fun double act, thanks to Larry Cohen's sarcastic and unsentimental script. Always underrated as a director, Cohen is perhaps even more so as a writer, who consistently delivers excellent concepts for genre movies. Muscular direction from John Flynn who made two of my favourite crime films of the 70's with The Outfit and Rolling Thunder, adds a no nonsense quality to the film, always a good choice for a film such as this, Flynn really should have been a bigger name. 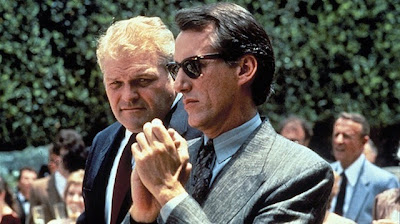 My criticisms of the film would be the score is poor, sounding resolutely of it's time and not in a good way, it does little to add anything to the film at all. There's a terrible performance from Victoria Tennant, who thankfully doesn't have that many scenes in the film. To be fair to her, she is completely believable in a tough to watch scene where Woods terrifies her with a blade, although this is more down to Woods' intensity than anything else and her fear was probably real! Finally, the film could have done with a stronger villain or henchmen, Shenar is suitably smarmy but lacks any real menace, and never feels like he could be a match for the pairing of Woods and Dennehy. Given Shenar previously had Woods to do his dirty work, the film could maybe have done with someone his equal for the inevitable final confrontation. 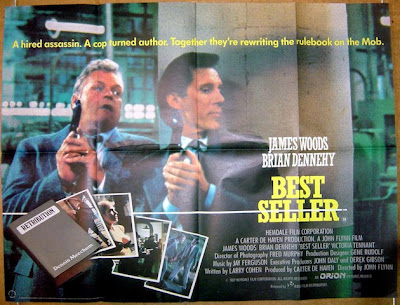 Best Seller may fall short of greatness but has plenty to offer the jaded genre fan, the fantastic central partnership of Woods and Dennehy, a fun script and a couple of decent action sequences. What raises the film above the masses is the truly great performance from Woods, and is an absolute must for anyone who appreciates him, as I do, as being one of the finest actors of his (or any) generation.
Posted by A hero never dies at 6:26 PM

You sold me on it! Can't believe I've never seen this. Gonna fix that ASAP!! Great review man!

Great review! James Woods was excellent. Have you seen Cop?

Thanks rG. I'd highly recommend it.

Always loved that abrupt ending in COP where he shoots and it's over. That's how you end a movie.