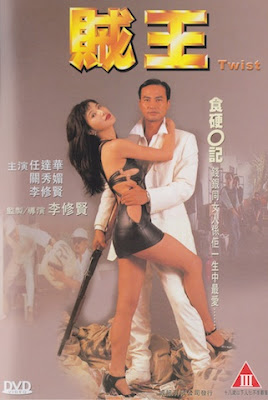 Yam (Simon Yam) plans and executes a daring heist of 170 million dollars. Lee (Danny Lee) of the O.C.T.B. is assigned the case and he and his team are quickly on Yam and his girlfriend's (Suki Kwan Sau Mei) trail. The cops (played by most of Lee's regular team, with the addition of Riki-Oh himself, Fan Siu Wong!) tail their prey but Yam is too smart for them, and humiliates the team at every turn. When the pair are eventually arrested, Yam's slimy lawyer leaves the police with nothing. With only 48hrs to hold them, how far are the cops willing to go to get their man?

Before getting into the film properly, I have to mention Danny Lee's hair. It's the same as it is in every film he made in this period except it's PERMED on top. It has a life of it's own and is almost a separate character to Danny. The perm is my favourite part of Twist, it amused me constantly throughout the movie, and people talk about Nic Cage having bad hair days! 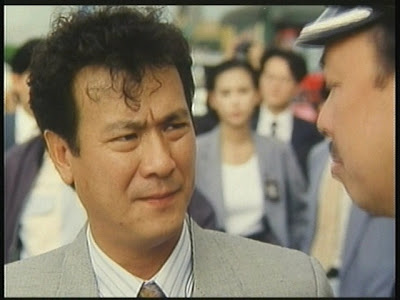 Lee's hair is not the only entertaining feature of Twist, Simon Yam is great fun throughout the movie and  seems to be having a great time enjoying the company of Suki Kwan Sau Mei. They share a ludicrous and extremely funny sex scene, while the cops look on. Yam's wardrobe appears to be made up of cast offs from Judge, his character in Ringo Lam's Full Contact, the highlight being a quite incredible swimsuit. The movie also features Shing Fui On and Tommy Wong as Yam's heist cohorts, these parts lead to some hilariously unsubtle political commentary on China's human rights policies. As if all this isn't enough Twist also has some of my favourite subtitles for a long time, with "you shitty sucker" and "save my tits" standing out in particular. 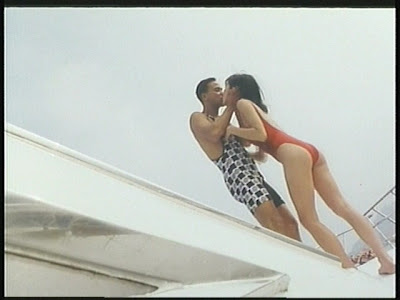 As much as I was enjoying all this, I wasn't sure where the film was headed, or why it was cat III rated (the energetic sex scene aside). As we get to the last section of the film, it becomes clear as it gets exceptionally nasty with the cops resorting to torture to try to extract the information they require. The problem is Lee continues the film's relatively light hearted tone, treating many of these sequences almost as gags, especially a high powered enema. Even worse the invasive torture of Kwan Sau Mei by one of the female cops is horribly exploitative and filmed with the camera leering all over her body, making it very hard to stomach.

Overall Twist has so many plot holes and inconsistencies that I'm going to ignore them, as for all of it's flaws, it's an entertaining and fast moving cat III effort. It's a strange film really, it's probably too light for the real sleaze merchants, who may end up being bored waiting for the "good stuff" at the end. For others the ending may ruin what had been a pretty fun movie up to that point.
Posted by A hero never dies at 7:27 PM

Wow, that hair is something else. lol. Great review man! You know, I used to be obsessed with Hong Kong cinema back in the day. I've been out of the loop for so many years though. I'm glad I have this review site to keep me updated on whats hot and what's not in the world of HK Cinema. Makes it easier to thin out the humongous list of films I might try to seek out. :)

Thanks rG, Keep the HK faith!

I've not heard of this one, Martin, but you've sold me on it!

Brian. Should have mentioned this came in the form of a dvdr, apparently a legit one as I got it from Buyoyo who have always been legit afaik.