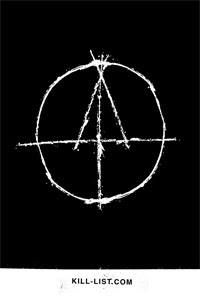 2011 is turning into a great year for British genre film, after the commercial and artistic success of Attack the Block, we have Kill List, Ben Wheatley's second film as director following Down Terrace. It's a truly superb film, and one it's important to see knowing as little as possible about in order to experience the full effect. Wheatley has announced himself as a genuine cinematic talent with this movie and I'm sure he will be a real director to watch in the future. 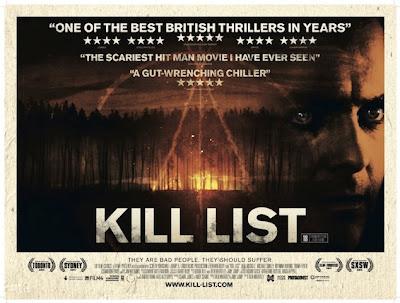 Ex-serviceman Jay (Neil Maskell) and his wife Shel (MyAnna Buring) are having domestic issues, Jay hasn't worked for eight months and the financial strain is showing. Gal (Michael Smiley), Jay's best mate and work colleague brings his date Fiona (Emma Fryer) round for dinner to talk about setting up a job. After an extremely uncomfortable evening Jay and Gal decide to take the job on, and after meeting with their employer, Jay signs a deal in blood to accept the job. That really should have set alarm bells ringing! You need to see it yourself for the rest! 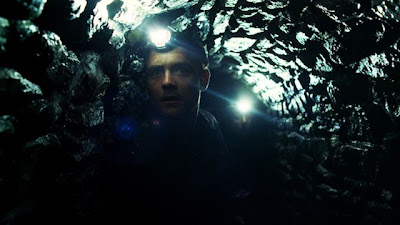 A melting pot of genres combine in Kill List to create something if not unique, then certainly highly unusual. We have a superbly executed and naturalistic domestic drama, a brutal crime thriller and terrifying horror film all expertly mixed via inventive editing and incredible sound design. The film is laced with vicious black humour, even more vicious violence and a palpable and unbearable sense of dread, pressurised further by an incredibly effective electronic thrum of a score.

The acting from is excellent, the friendship between Jay and Gal feels completely natural, whether they are joking with each other or arguing, it feels real and the same can be said for how the marriage is presented, you rarely see it given this kind of portrayal in movies. Much of the dialogue was improvised and this adds to the realistic feel of the conversations. Jay's frustration and rage is expertly handled and his bewilderment at whats happening is all so believable. The film comments on the current financial burden most of us face thanks to the recession and also on the war in Iraq and how it skews the world we live in. At it's heart though it's a genre film through and through and the political commentary you can take it or leave it and still get as much out of the movie. 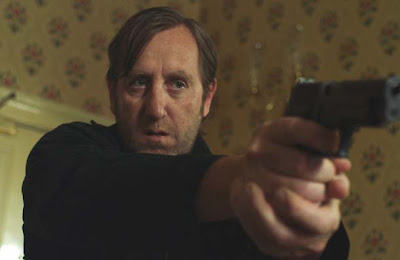 In deciding not to spoiler the film, Kill List becomes a difficult film to review as there is so much to talk about. The movie has had strong word of mouth and this is absolutely deserved, but this brings the burden of hype and the potential for diluting the experience. It certainly won't be liked by everyone for many different reasons, It's pretty ambiguous, with little to no explanation of why certain events happen. It's got a really nasty streak to it's violence and of course there is the big talking point which has divided some reviewers. Whether you end up liking it or not, Kill List deserves to be seen by any genre fan. I found it to be a stunning piece of cinema, unsettling and disturbing in equal measure and one that will stay with me for a long time. If you do decide to see it, and you have a choice, make sure you see it at a cinema with the best sound system, the film is a real aural assault and for me much of it's power is derived from the audio.
Posted by A hero never dies at 8:09 PM

Great review, Martin. I will definitely see this. I read an interview with Ben Wheatley describing how he made Down Terrace on a miniscule budget raised from friends. It's great when a Brit film-maker comes along with that kind of energy and edge.

Thanks Jon, Look forward to hearing your thoughts on the movie. Wheatley is a real talent, and Kill List should be a real spring board into a fantastic body of work.

One of the few movies I am going to pick up when it receives a home release, this one was terrific.

I'm really tempted to go and see it again, to see if I can pick up more details. I haven't stopped thinking about it all week.