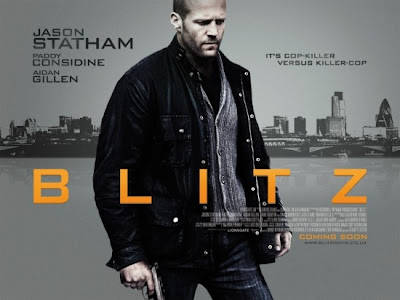 Blitz (Aidan Gillen) is a head case, seemingly killing random cops in London's South East. Maverick cop Brant (Jason Statham) is on his trail and teams up with Nash (Paddy Considine) to try to take him down. In a way that should happen more frequently the film is neatly encapsulated by it's tagline,"It's cop-killer versus killer-cop".

Of course there is more to it than this, but distilling the film down to this works so much better than explaining every little detail, in fact the film would have been far superior had it kept things simpler. Far too many subplots are set up and either thrown away or left unfleshed out, so instead of Blitz being lean and tight it feels flabby around the edges. The main problem with Blitz is, outside of some particularly harsh language, it looks and feels like a TV show. This is despite the use of some excellent London locations that look really cinematic. The overriding feeling being like one of those 9pm ITV dramas that are so unfathomably popular. 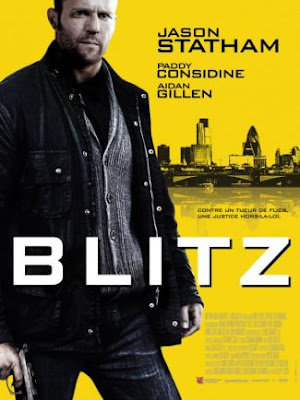 Onto the good stuff, Statham and Considine make for a great pairing and bounce off each other well. The mismatched cop theme has been done to death but the chemistry between the two actors is excellent and the banter between them is the best part of the film. Brant belongs in the 70's, the two obvious reference points being Dirty Harry and Gene Hunt, whereas Nash is his contemporary flipside. To make the mismatch more pronounced, Nash is gay and this aspect is perhaps made more of than was strictly necessary but does add to the dinosaur like nature of Statham's character. Gillen makes for a suitably nasty villain and there is decent support from the fringe actors.

Blitz is an entertaining time waster and there is definite fun to be had, but it's nowhere near as good as it could have been. The filmmakers could have gone all out as an action thriller, instead in adapting Ken Bruen's novel more closely, they've bogged the film down trying to fit too much plot in without really doing it justice. Hardcore fans of The Stath will probably feel satisfied, for everyone else it's above average beer and movie on a Saturday night fare.
Posted by A hero never dies at 6:53 PM

Predictable yes, but i enjoyed it, basic plot, lots of action, sometimes you need to watch a film like this just for the hell of it. Great review by the way.

David. Thanks, I enjoyed it too, I just wanted it to be tighter or alternatively to be longer to expand on the sub plots and make them worthwhile.

Ty, Thanks I'm sure you'll enjoy it, he has some great lines and his banter with Considine is great.

Watched this last night and dug it but it could have been SOOOO much better. You are spot on with the pairing of Statham and Considine but they needed more scenes together. Considine leaves the film for long stretches too often. David Morrisey's character should have been fleshed out more and had a heckuva lot more screen time. Aiden Gillen was great but something was missing? He could have made a classic screen villain but something was just missing???

It's a decent show and a film I would recommend for just as you say, a beer and a movie night.

Kingwho? Yeah it's a bit of a missed opportunity but entertaining anyway. Are you a Stath fan?