.... at least until I get the chance to review the film!

A new trailer has been released, and despite the relatively lukewarm reaction the film seems to have had at it's festival screenings, I see enough in it to still have high hopes for the movie. Lau Ching Wan in particular looks fantastic.

Another new poster too! 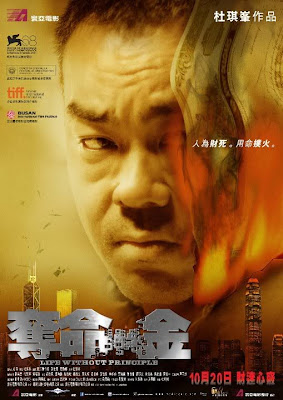 Finally a Q&A session from the Venice film festival with Johnnie To, in two parts.

Until I get my hands on the film itself then...
Posted by A hero never dies at 7:59 PM

Looking forward to this myself. No shame in being optimistic about it, Hero.

Great trailer, looks like To is trying his hand on something new here.
Not a single shootout to be found in the trailer. I'm excited.

This looks so different from To's usual fare. Really looking forward to seeing it.

No shame Phantom, it's just I was hoping for better reviews, not that they are always anything to go on. I remember Mark Kermode, one of the better English film critics being completely apathetic towards Election when he covered Cannes, completely ignoring all of the cultural aspects of the film due to ignorance of the subject matter.

Dr.Lamb and BT. It's a really nicely put together trailer, much more coherent than the first release one, and once again the film looks beautifully shot. It will be interesting to see how different it is from his other movies.