The UK blu ray release of Taskashi Miike's 13 Assassins was released here yesterday, I picked it up and last night gave it a spin. First the negatives, unfortunately this region B disc, like the US release features only the international version rather than Miike's longer Japanese cut. This despite the missing scenes being included as an extra. As I understand it the rights for the Japanese version were never made available, so this is not the fault of Artificial Eye (the film's UK distributor). What this means is that currently there is no English friendly release of the longer version available, which will hopefully be rectified soon. The only other issue I have with this release is the terrible cover art as seen below. 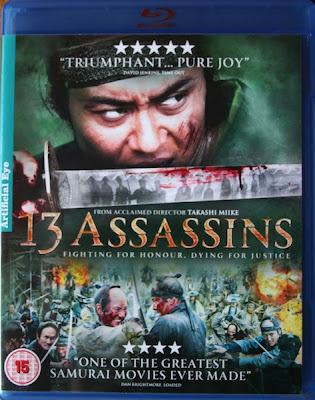 Moving onto the good stuff, the blu ray looks superb, the image has real depth and retains a veneer of fine grain resulting in a very film like look. Outdoor scenes look stunning with interiors looking a little flatter, this is due to the scenes being mostly lit by candlelight and are true to how it looked in the theatre. The nigh on perfect image is supported by a wonderfully robust DTS-HDMA 5.1 soundtrack, that delivers the excellent score and brutal sound effects with rich depth and clarity.

Extras include the film's trailer, an almost 19 minute interview with Miike and the aforementioned deleted scenes. The missing 20+ scenes are presented in the form of a 23 minute feature and unfortunately, cannot be selected individually. On the plus side they are of the same image quality as the main feature and subtitled. They vary from extending scenes by a few seconds to whole scenes. Highlights include an attempted mugging on one assassin, an amusing scene where Koyata proves his steel and another where he proves a different kind of steel by working his way through every girl in a brothel before finishing with the male owner of the establishment! 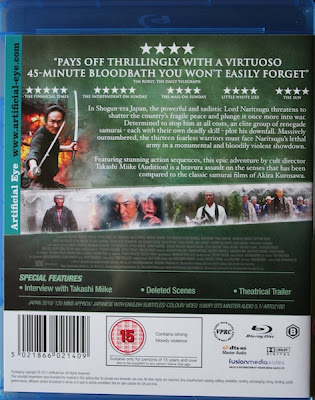 It's a shame the Japanese cut couldn't be included on the blu ray as well as the shorter cut, as it just means a double dip in the future. No matter as this is a fantastic release of a truly memorable and great film and that double dip will just be an excellent reason to watch it again.
Posted by A hero never dies at 5:51 PM

Yeah, I saw this a few months ago. I wasn't blown away by it. I thought it was a little too sterile for a Miike film.

Good stuff Mart, I didn't know this one was out in the UK. How much of a differnce is there between the Japanese cut and the Artificial Eye cut ? Does it add up to much ? Is the film really as good as the galaxy of stars on the back sleeve ?

I agree that cover art is lame.

But since the extras are of the same quality, it wouldn't be too difficult if you have the knowledge and were so inclined, to extract and combine everything into a custom extended version.

I watched 13 Assassins in HD on Netflix, and it looked fantastic. Also, loved the film. A true, classic Samurai film and a welcome one in this day in age where long subtle build up is an art form that is far from prevalent.

It's too bad about the lack of a Japanese cut, though, like BT says, someone could very easily combine the footage and film if they have good movie editing software.

Dr.Lamb. It isn't that often I say this but I couldn't disagree more. 13 Assassins completely blew me away, and while it may not feature the excess Miike is known for I think taking that approach would have ruined the movie, which is a very classical samurai film. I do think his personality is still evident though.

Wes. The blu came out on Monday, I loved this film so much I had to get it and more importantly watch it immediately. It's hard to judge how much the deleted scenes would affect the movie seeing them so chopped up, but the ones I mentioned could certainly have been left in. There is also a little more of the huge battle too. I reviewed it in April and having seen it again now, I would say it definitely does deserve every last one of those stars.

BT, Yeah I'm not sure they could have designed a worse cover really. I know that you can download a custom version, but I'm lazy and would rather just click buy and have the postman bring it to me. It would take me months to download a 40gb file on my connection. As for doing it myself, I've already said I'm lazy but I'm also impatient, not a good combination for that kind of a job!

Matt. Completely agree, the build up is superbly paced and what an incredibly satisfying pay off the film has. A stone cold classic.

Thanks for the suggestion for the Japanese cut, but see comment above!

I've had this one since it came out here in the U.S. a while back, and I still haven't sat down to watch it yet! lol. You just made me wanna dust if off and give it a look! :)
So many movies, so little time!
Great review man!

Thanks robotGEEK, I'm sure you'll love it. as you say "So mnay movies...."

I'm going to rent the DVD of this title first, before possibly deciding to buy the blu ray. The quality of Miike's films is variable, and even though this got great reviews, I'll wait. However I did pick up WITCHFINDER GENERAL (for only £9-85 incl p+p) and DEEP END recently on blu ray...waiting for them to come through.

Shaun. It's always difficult to tell, but judging by reading your blog I would guess that you will at the very least really enjoy 13 Assassins and more than likely go for the blu. I'll be surprised if anything can knock it out of at least my top three of the year, if not higher! Either way I'd love to know.

Alwayx for for the Blu-ray version if you can afford it. And 13 Assassins is a great piece of martial arts action, with a compelling enough story line.