Scream 4 (or Scre4m if you're down with the kids) review 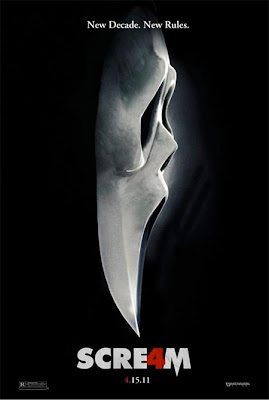 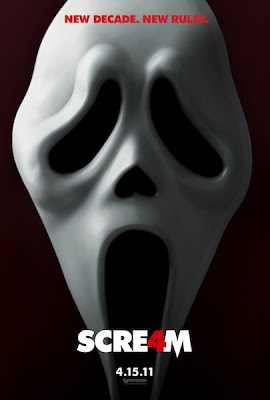 Sidney (Neve Campbell) returns to Woodsboro on the last leg of a tour to promote her new self help book. Once home she meets up with Dewey (David Arquette) and Gale (Courteney Cox) who are now married. Sidney's appearance coincides with the return of Ghostface, who is once again targeting those close to Sidney including her niece Jill (Emma Roberts).

As a fan of the first two Scream movies (The less said about part three the better!) I was cautiously optimistic for the fourth entry in the series. Unfortunately, while significantly better than the third film, I found Scream 4 pretty disappointing. It starts off quite promisingly, with a fun opening and some real energy but this soon evaporates and the film quickly starts to feel tired, prompting everyone to force the issue and start trying too hard.

Williamson's script has a few good jabs at the current state of the genre, I just feel the whole schtick worked better when it was more focused in the first two entries. Scream targeted the 80's slasher films and Scream 2 their sequels. Here the film gets bogged down trying to satirise too many things and becomes a jumbled mess of ideas that never completely nails any of them. 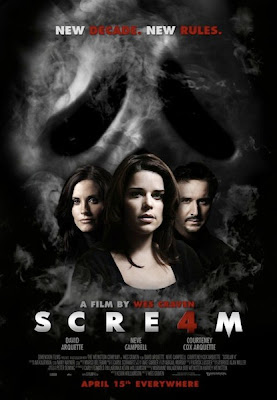 Craven never manages to reach the heights of suspense achieved in the first two movies, instead we get an increase in the gore quotient, perhaps trying to appeal to the fans of the Saw and Hostel movies? This adds little to the movie in real terms though.

The cast slip back into their roles very comfortably and it was fun to see David Arquette's Dewey again, now as the sheriff of Woodsboro. The rest of the cast of mostly TV talent all do okay, with Community's Alison Brie having probably the best role (and death!) as Sydney's bitchy publicist.

Did we really need to return to Woodsboro again? To my disappointment the answer is no. While not a terrible film, it feels laboured and frankly a little unnecessary, like Craven's heart wasn't really in it. The best I can say for the film is, if you like the series it's probably worth a rental. However I can't imagine ever choosing to watch it again for my Scream fix.
Posted by A hero never dies at 6:40 PM

I agree with pretty much everything you've said here. I wasn't hoping from too much from Scream 4, but I was hoping for something a little... better I suppose.

I'd still be curious to see a Scream 5, but I really thought this could have been handled better to set up a potential sequel.

This was just fun and a lot better than the third one which wasn't terrible, but just not as good as the first two. Good Review!

Good review Mart - this is one I'll see some day when it finds its way onto Film4. I liked Scream 1 but the others all seemed like a Halloween episode of Bevery Hills 90210. I haven't seen it yet but I've heard House of the Devil is meant to be a really good 80's horror homage.

Liam, not sure really how much I would be up for a 5th Scream after this one. I expected something to reinvigorate the franchise but that isn't what we got.

Dan O, welcome to the blog and thanks for commenting! It's forgettable fun, I suppose expecting more than that was a little unfair of me. It could have been much better with a little more focus though.

Wes, I certainly wouldn't try to change your mind on waiting to see it, nothing here will alter your perception of the series!

House of the devil on the other hand I would urge you to see, very atmospheric, quite creepy and with a couple of great shocks.

Not sure on a Scream 5, I'm not sure this did well enoughto justify what must be some pretty hefty pay packets for the series regulars. I also think the filmmakers have little left to say on the genre based on this film.

Whatever about the film, that advance poster of the face appearing as the knife is a stunner !

Yeah I really liked that too Wes, the mask is still probably the best thing about the entire franchise.

Scream 4? Nothing but a symbol of the creative bankruptcy of hollywood. Everything has to be played safe, no risks are allowed because the investment is too great. Why let's churn out yet another sequel of a franchise! Sigh...

Y'know, there was a point where this film SHOULD have ended that would have made me really excited for a Scream 5.

Huge spoilers ahead: After Jill is revealed to be the killer, and after she stabs Sidney, there's a scene where she's carried out of the house on a stretcher all battered and bloody, and cameras are flashing. You know the scene I mean? That's when the credits should have rolled, and here's why:

The Scream franchise has a habit of toying with horror conventions, and this would have been a sweet reversal of the final girl stereotype. Here, the supposed final girl would have also been the killer, and that would have been an interesting set up for Scream 5 - the killer becomes the victim. They also could have left Sidney's fate as unknown (for now).

But then they went and played it safe and it all got silly during the last 10/15 mins in the hospital. Sigh.

Anon, You're right of course but that shouldn't mean it can't be fun, right?

Liam, Completely agree, the film already had it's ending and by stretching it out even further with the hospital scene, it was just too much and diluted the film even more.

Good review! Maybe i will watch this one, seems a bit too heavy on the irony. Scream 1 & 2 were pretty good. Scream 3 was a joke.