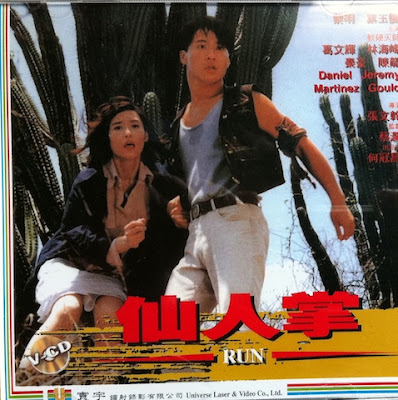 Back in my review of Wilson Yip's Mongkok story, I mentioned Anthony Wong starring in a film within the film, that being a rip off of Robert Rodriguez's El Mariachi. I didn't realise at the time that Hong Kong had already plundered Rodriguez's no budget wonder in the form of Chang Man Gon's Run.

Leon Lai Ming ( I never tire of saying that name!) stars as a guitar playing traveller in Mexico who is mistaken for a guitar case carrying Hitman. A simple enough misunderstanding to make I suppose. Veronica Yip also stars as a bar owner who gives Leon shelter from the killers on his tail. To complicate things further the killers work for the local crime lord, who of course is in love with Veronica Yip. 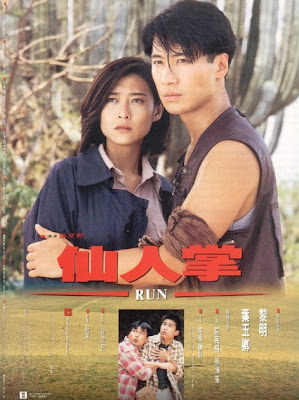 Run is a reasonably good retelling of El Mariachi, the emphasis of the movie is changed slightly with the second act being more of romantic drama between Leon Lai and Veronica Yip. This aspect is handled quite nicely and Yip in particular is very good. The film also has it's fair share of action scenes with some nicely bloody shoot outs sprinkled throughout the film. Unfortunately as is often the case with Hong Kong movies an injection of so called comic relief almost derails the entire enterprise. I'm not just talking about shifting tones throughout the film, I'm talking about Eric Kot and Jan Lam. Whenever they appear on screen they stop the film dead in it's tracks. They even manage to turn what should be a tense action sequence into a Benny Hill style farce. Surely no-one found this stuff funny? 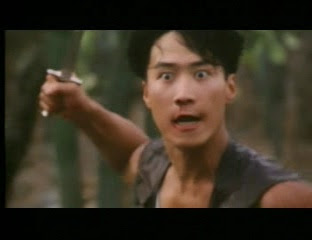 Fortunately the film is not completely ruined by these two clowns, while nowhere near as solid as Rodriguez's film it does have a certain charm. Yip does plenty with not much and Leon Lai Ming is more animated than usual. In fact he has a strangely surreal and genuinely funny moment where he hits someone with a cactus, leading into an amusingly overwrought fight scene, that's worth seeing the film for alone!

Another example of just how brazen Hong Kong movies can be in ripping off other films, Chang Man Gon's effort boasts a few decent action scenes, a pretty stylish look and a decent grasp of the material while still managing to add a little to it. Now if only he hadn't put Eric Kot and Jan Lam in there, we may have had a really good movie.
Posted by A hero never dies at 7:42 PM

WTF?! God, I would love to see this. Thanks for unearthing this treasure!

Ripping other movies off is a time-honoured tradition for HK cinema, at least some of this ripping off is done with style and flair (even if the end result isn't also so great). I rather have the HK style of copying than the Hollywood style of remaking foreign movies and "Americanized" it.

I'm sure you'd enjoy it Achillesgirl if you could track it down.

Anon, With you on that one!

I saw this at the cinema and couldn't believe how much of a steal it was. I haven't seen it since, but I think I liked the score.

Phantom, It is incredible that they weren't sued for it, I don't remember seeing any credit for the original or the filmmakers at all.

It sure is crazy RG. it's good fun and worth tracking down for sure.

let me ask you, have you ever heard of or seen a film called Pedicab Driver directed by and starring the great Sammo Hung? I believe it came out in the 80's. I saw it once in a theater and was so completely blown away by it and I have never been able to find it since. At least not here in the states.

RG. I saw Pedicab driver in a cinema sometime in the 90's, and you're right it is awesome. I think it came out on VHS in the UK but afaik. since then rights issues have prevented a dvd release. A bootleg is available but I'm not sure what the source is. I wish they would sort it out, a nice new dvd would be lovely!

dude, that's such a shame. i remember being blown away with how brutal the fight scenes were. i've always remembered it for that reason, along with that homage to star wars somewhere in the beginning i think. lol. its so funny, i thought it came out way in the early 80's. lol. i didn't realize it was from the same year batman came out. thanks for the info bud!

"Yip does plenty with not much." --- very well said. She's extremely charming in this movie.