Jamie Luk Kim Ming's Robotrix is a category III classic to many, and tasteless trash to many more. I lean towards the latter camp but it certainly does have it's moments of fun, both intentional and otherwise. 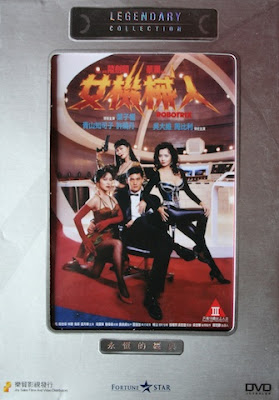 A Japanese robot engineer develops a technique to transfer his mind into a cyborg (Billy Chow). He goes on a murderous crime spree in his new seemingly invincible body. One of his victims is a cop (Chikako Aoyama). She too is made into a cyborg and along with her cop boyfriend (David Wu) and another cyborg (Amy Yip) they set out to end Billy Chow's reign of terror. Trying to describe the plot of Robotrix is extremely difficult as it's such a jumbled mess of ideas stolen from many science fiction films, the obvious one being Robocop. Add in some horny, comedy cops, gory violence and ample sex and nudity and what you end up with is a mess. 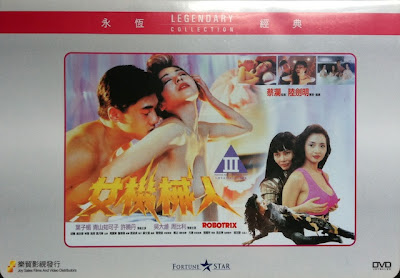 A low budget sleaze fest, with mostly laughable filmmaking and production values. A perfect example of this is the early scene of the supposedly futuristic robot design show, which is hilariously funny. To be fair it's a quite ambitious undertaking to make a film in this genre, especially on a low budget, but this is where the quality of the screenplay needed to be better. The film feels thrown together, with the slight story not being enough to sustain a ninety minute running time, many scenes feel padded well beyond their welcome.

The film certainly delivers on it's category III elements and these are obviously all important to a film like this. Plenty of gory violence, albeit with some cheap looking effects and more than it's fair share of sex scenes and nudity. Yet again Amy Yip frustrates her legion of fans by managing to cover herself up by any means possible, although the ample charms of Chikako Aoyama make up for this to some extent. A particularly nasty scene between Billy Chow's cyborg and a hooker provides a gobsmacking reminder that they don't make them like this anymore! 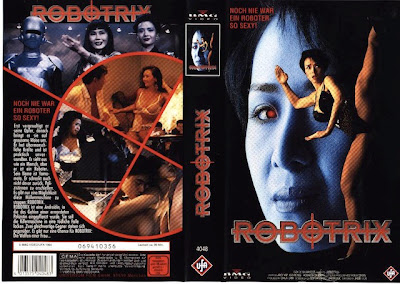 Robotrix is a perfect example of why I don't have a rating system for movies, how would you score a film like this? In terms of the quality of story telling and filmmaking skill involved, it's terrible. On the other hand, while it has virtually no redeeming features, it is pretty hilarious and even though much of the humour is unintentional, there is undeniable fun to be had here. With a film like this, you know exactly what you're in for and if you're in the right frame of mind, you could certainly waste an hour and a half on a lot worse, this says more for me than any rating I could give it.
Posted by A hero never dies at 7:31 PM

My placement for films like this is trying to compare it for similar films. Obviously not Robocop or something, but is this better or worse than something like Tokyo Gore Police?

I found some clips of this over at youtube and it definitely looks like a fun 90-minute romp. It's got some decent production value too and the wire-work didn't look too shabby from what I saw. I'll seek this out !

A. I haven't seen Tokyo gore police, but I know what you're saying. The thing is I can't think of many films I've seen that are like Robotrix!

Wes. I'm not sure what clips you saw but for the most part the production values are terrible, it may be down to the low quality of Youtube but on the dvd you can regularly see the wires. It's a laugh though.

David Wu? Wasn't he one of the Taiwanese host of MTV Asia back in the early/mid-90's? I did'nt know he made Cat III flick...with Amy Yip! Where is he now?

In my case put it down to years of soaking up Bad Cinema, all of which has severly blunted any critical tools I might have had ! Check out this clip from the jaw droppingly bad HK flick Robo Vampire on youtube

That is amazing Wes, that's outside my knowledge to be honest, check out this from John Charles about that movie http://www.dighkmovies.com/v2/108/108.html

Many thanks Mart, that explains a lot ! I really need to get The Hong Kong Filmography...

TOKYO BORE POLICE wasn't as good as MACHINE GIRL, imo. I haven't seen ROBOTRIX in years. The tape I had was dubbed I think. Might be wrong on the dub, but I remember liking it a lot. Next dddhouse order I will try and remember to order this. Great write up, Martin!

On my blog I still use the four star rating system and approach that I got from being a columnist for Asian Cult Cinema magazine. Basically the rating was based on how I, and other A.C.C. writers, felt a particular film compared to others in the same genre. So perhaps I'd rate Robotrix, which I too haven't seen in years, based on how I thought it compared to, say, I Love Maria or Lady Battle Cop (a Japanese rip-off of Robocop). This approach can be problematic at times, since lots of films fit into more than one genre. But it's the fairest approach I've come across to date.

Venoms5. Thanks, I didn't rate Machine Girl highly so I'm in no rush to see T.G.P. I'm sure it will be pretty cheap at DDD so it's definitely worth picking up.

Dr Stan. Welcome to the blog and thank you for commenting. I can understand the reasoning behind that system and it has worked for many great film writers for many years. For me, I think that many people see the score as the be all and end all of a review, and if something doesn't score highly then it's worthless which is certainly not always the case. It's a tricky one!

I agree with you about many viewing ratings as "the be all and end all." Forgot to mention that on my blog I, after the star rating, I put a brief verbal comment, like "fairly good," "highly recommended," etc. Also want you to know that I added a link to your blog on the rail of mine, I like it so much. Also, I suggest you give "Tokyo Gore Police" a chance. I found it to be highly enjoyable. Great special effects, plus it stars Shiina Eihi, who was unforgettable in Miike's "Audition."

Dr.Stan. Thank you for your kind words and adding me to your rail, much appreciated. Tokyo gore police is available on our Netflix equivalent over here so I'll give it a shot. The film had a very striking poster, I'm not sure what put me off it really.