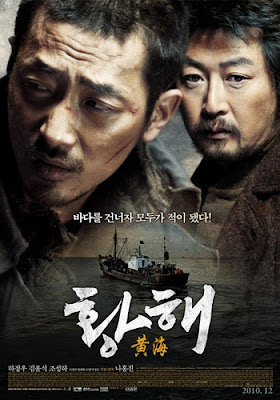 The Yellow sea is yet another entry in the increasingly long line of Korean revenge thrillers, and like many other Korean movies it's long, very long! With a storyline that frankly cannot justify a running time of 156 minutes, you may fear the film would be in serious trouble and while it's true that the film is an exercise in excess, I found it riveting from start to finish. Na Hong Jin, the film's director really doesn't know when to quit and although some may find that annoying, as then film went on and on I began to enjoy the rhythm of it more and more.

A relatively simplistic plot of a hit and double cross to cover up the hit is the framework to hang a number of increasingly exciting and elaborate set pieces on. The film features an incredible array of chase and fight sequences, to the point of excess in fact but they are so well staged and so exciting that you just don't want them to stop. In particular a long foot chase is one of the best scenes of it's type I've seen in any film. 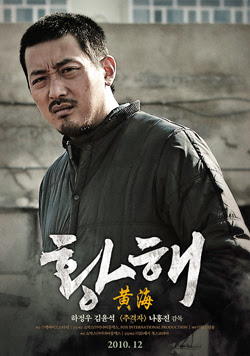 The title of The Yellow sea refers to the stretch of water that separates Korea from China, Koreans and Chinese have made the trip across the water leaving communities of each on both sides. These areas are where Na hong Jin's film take place. One of the most potent scenes in the film is where Goo Nam is smuggled into Korea across the sea, a harrowing sequence showing the true value of human lives to the people who traffic them.

An excellent cast is lead by two great performances, Ha Jeong Woo and Kim Yoon Seok are tremendous as the two main characters. Ha Jeong Woo manages to generate real sympathy as Goo Nam, a self destructive man desperate to get his life back together but yet still on completely the wrong path to get there. Kim Yoon Seok is amusingly and terrifyingly crazy to begin with and only becomes more so as the film progresses. The action sequences are extremely impressive and unusually with a hardly a gun in sight, this is very much a knife and hatchet show. The knife fight featured in the Korean movie The Man from nowhere was a great scene but that was all about technique and skill with the knife. In The Yellow sea, it's all about getting down and dirty with the blades in order to survive, and as such it's incredibly brutal! 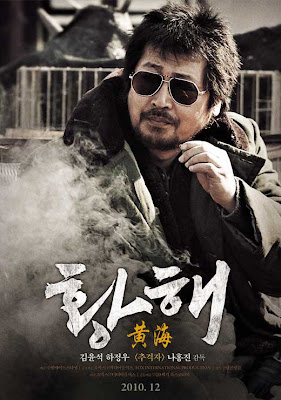 Perhaps most importantly for such a long film, the pacing is handled superbly, a measured pace to start, slowly building momentum until by the midway point the film exerts a vice like grip right the way through the rest of the movie. As I said before the film is exceptionally brutal and intense but does also have a sense of humour, it maybe the blackest humour imaginable but it really helps, and does so without diluting the ferocity of the film.

After the excellent The Chaser, Na Hong Jin's second movie confirms he's a filmmaker to watch for the future. The budget was obviously higher with The Yellow sea and it's interesting to see what he chose to do with it and I'm really eager to see what he does next! 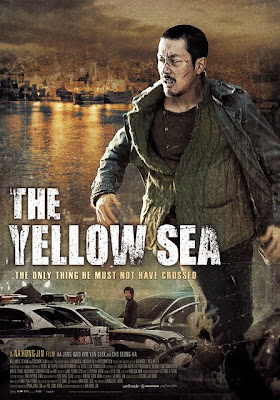 It was good but I didn't enjoy it as much as the Chaser. I loved the opening setup and the long build up to the action, but felt there were a few too many one man against all odds scenes.

Great review! This looks like a really good movie.

Bonjour, I completely get that viewpoint, but I loved the absurdity of it all, the amount of hammer the characters take pushes the film into black comedy territory, and the action scenes are so good I could have happily watched another hour of it!

Ty, Thanks and it is, highly recommended.

Excellent review Mart, this one is new to me, but it sounds really good. I love a long film when paced right, often I find films are over before you can settle into the characters. I'll seek this one out. There's good stuff coming out of Korea...

Have you seen The Chaser Wes? I think you'd probably love them. Highly recommended, the pair!

I'm scribbling all these down...

In other news, I saw Flash Point this afternoon on the hop from work and I thought it was great. Wow, Hong Kong looks impossibly futuristic for 1997 ! Anyway, I loved it...

I liked this movie too. I was sort of at arms with the length of the film but the grittiness of it shined through. Good call with the butcher style knife fight as opposed to Man from No Where & Flash Point! I was a bit confused at the end with the wife thing, but I think it resolved itself! I would watch this movie again in the theater!

Wes, Glad you got an HK fix, I didn't like Flash Point though. Far too much of a Donnie Yen vanity project for my liking! Good point about 1997.

Mr C, I'm really looking forward to an English friendly blu ray, I can't wait to see it again. A shorter version is also around running 140 minutes, seems to be some confusion as to if it's the directors cut, an international cut or both.