Someone take these dreams away

I only really got into music at the age of around 15 and the first band I fell in love with were New Order, and in the way boys do I rapidly became obsessed. It wasn't long before I traced back their heritage to Joy Division, and while both bands shared certain traits, here was a different beast altogether. I may no longer be obsessed in the same way (getting older does that somehow!) but the music of both bands is still ingrained in me and will be forever more. 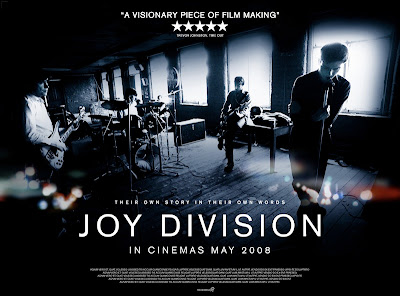 Grant Gee's documentary Joy Division covers the story of the band from the inception of the group (various members seeing the Sex Pistols in Manchester in 1976) through settling on the name of Joy Division through to the inevitable end with the suicide of Ian Curtis and the rest of the band's resurrection as New Order. It's a well known story with many other films and documentaries covering similar aspects of Manchester's musical history and for fans of the group Gee's attempt will hold little in the way of new information. However the film is so well done, everything feels fresh and exciting as though you're hearing the story for the first time. 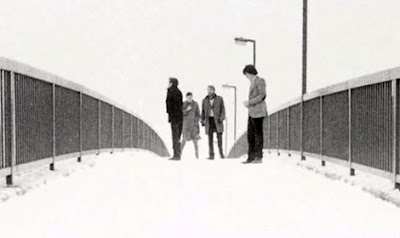 The documentary is made up of old and new interviews with most of the major players as well as various quotes, photographs and plenty of unseen footage of the band performing. This footage is taken from bootleg recordings and as you would expect the quality varies. Rather than detracting from the film, it actually adds to it as the footage is so well edited into the narrative. While the film seemingly attempts to strip away the mystique surrounding Curtis and Joy Division, the grainy footage and strength and power of the music only increase it.

Perhaps the biggest revelation for fans of the band are the emotional accounts of the events surrounding the death of their friend. In the past when interviewed about the subject they had always been reticent to talk about it, but here Bernard Sumner (Guitar), Stephen Morris (Drums) and Peter Hook (Bass) share some really candid moments making the film unexpectedly touching. 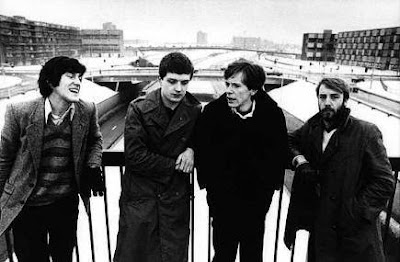 The film cleverly juxtaposes the intellectualisation of the band (from various critics and commentators) with the thoughts of Sumner, Morris and Hook. All three are eager to dispel the myths around the band, for me the truth is somewhere in between the two extremes. Curtis was clearly an intelligent man and the musicians went from a punk D.I.Y aesthetic, where they could hardly pick up an instrument to being an extremely tight musical unit. It has to have been more than this alone that lead to the greatness that followed and I put that down to decisions being made on gut instinct rather than by design, a little luck in those decisions being the correct ones and most importantly the chemistry between those involved, as Hook says in the film it was really easy writing those songs.

One real shame about the film is that Deborah Curtis (Ian's wife) did not want to participate and where Curtis' lover Annik Honore is featured prominently, Deborah is only represented by quotes from her excellent book Touching from a distance.

The personality that dominates the film is the late Tony Wilson, who gave the band their first appearance on TV and released their albums on Factory records which he set up. Tony Wilson was never shy of a hyperbolic quote or two and here he throws them around with abandon. He may have rubbed many people up the wrong way and indeed many considered him to be a prize twat. In some ways it's hard to argue with that, but I will always remember him as a loveable prize twat, and while he often exaggerated, the root of his quotes often had some truth in there somewhere. 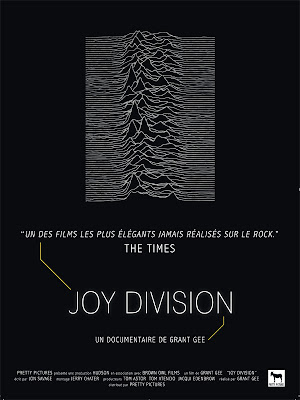 Joy Division is highly recommended to anyone, fan of the band or not. It may predominantly be about the band but it also covers what it was like to live in Manchester in particular but also many other Northern English towns in the mid to late 70's. While the footage of Manchester life maybe dour, the film itself is vibrant, fresh and vital. Fitting really as the thing you're left with after the emotion of the story is the music. A sound which has been imitated countless times without success, songs that have been covered but never matched and music which still sounds futuristic more than thirty years on.
Posted by A hero never dies at 4:56 PM

It is a good film, and I'm not just saying that as a big Joy Division fan.

Great post Mart, a brilliant selection. What can I say about one of my all time favourite bands - I never stray too far away from them, I still listen to Closer almost weekly - a haunted house of a record, and I still have all the original JD (and NO) Factory vinyl. The doc is fabulous stuff of course but one thing bothers me - when I discovered JD back in the days when I was a shy and moody teenager they were so mysterious, esoteric, secret. Nowadays the JD story has been written about countless times, there's the doc, and the films (Control and 24 Hour Party People, both essential) and for me that mystery has evaporated somewhat. What I'm trying to awkwardly explain is that no one can discover JD again like we did... Favourite NO album is still Movement and as I write this I'm listening to NO's Cries and Whispers - "Once out of reach, we never speak, we never compromise" - words that say what I never could...

Stabford, Yeah it's an excellent documentary regardless of if you're a fan or not.

Wes, I'm such a JD/NO junkie, I have the films but I still haven't watched them, I think due to not wanting to be let down. Stupid I know, picking up this documentary was my way of pushing myself to watch Control in particular, and then 24 hour afterwards.

Power,Corruption and Lies and Lowlife are my pick of NO's records, but most of them have their moments.

Control really is an excellent film. This kind of thing can easily be done badly and I was nervous myself going into it but it's a very worthy film...

Great review, and I'm in total agreement with your frustration that Deborah Curtis was not interviewed. As she said, we still have her book. As for 'Control', it blew me away and I've seen it several times.

Sounds good, I'm a big fan of Joy Division and have been meaning to get round to watching this for a while.

As for 'Control', I'll go against the grain and say that I thought it was a really poor film. There's a couple of good lines in it, but there isn't a second during the running time, where I wouldn't rather be watching a documentary or just listening to a record. Mr Corbin takes a good photograph, but a film-maker, he is not.

'24 Hour Party People', on the other hand, is a great big slice of fun.

Wes, Even with the mostly glowing reviews I was still nervous as it meant so much to me for it to be great. I will make it a priority now!

Phantom, Thanks for the kind words. Touching from a distance is a great book but as it was published quite a while ago and it would have been nice to hear from her again.

Dan, I'm going to watch Control at the weekend. I'm curious now, regarding Corbijn did you see The American? If so how did you find it?

how did you find 'control'?