John Carpenter's In The Mouth Of Madness 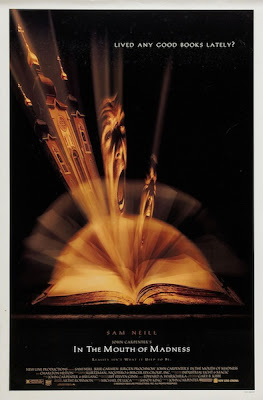 Released just a few months after Wes Craven's New Nightmare, John Carpenter's In the Mouth of Madness mines a similar vein of meta horror. Carpenter's movie is less successful than Craven's attempt but is still an interesting and enjoyable film.

John Trent (Sam Neill) is an insurance investigator, hired to find the missing horror novelist Sutter Cane (Jurgen Prochnow), think along the lines of H.P. Lovecraft meets Stephen King but even more successful. Trent is convinced Cane's disappearance is a publicity stunt by his publishing company to promote his latest book and is partnered with Cane's editor Linda Styles (Julie Carmen) to track him down. Trent soon finds he is way off the mark, as the impact of Cane's imagination begins to influence his readers and the real world in violent and terrifying ways. 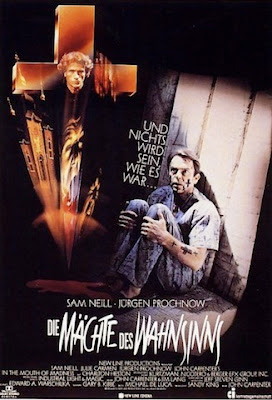 Made in 1994, In the Mouth of Madness looks and feels like a 1980's John Carpenter movie, and is without doubt his best post 80's film. The central premise of the film is an excellent concept and it's unfortunate that the film doesn't get the best out of it. While the movie has a few stand out ideas, some good practical effects and a solid central performance from Sam Neill, Carpenter and writer Michael DeLuca can't quite manage to hide the feeling they came up with a great idea but didn't quite know what to do with it. Carpenter would go on to use a similar idea for his Masters of Horror TV episode Cigarette Burns, replacing the written word with film. Once again the full potential of a great idea was unrealised with this project, although the episode, like this film does have merit.

Having said In the Mouth of Madness is Carpenter's best post 80's film, as most of his fans will agree that doesn't necessarily mean that much considering his decline through the 90's to present. The film is too unfocused to be classed as top tier Carpenter. It does have some great moments, particularly the scene with Cane's agent approaching the coffee shop window with axe in hand and the ending is very good too. It's a very handsome looking movie and has a fun sense of humour without sacrificing it's tone,  always a difficult thing to pull off. 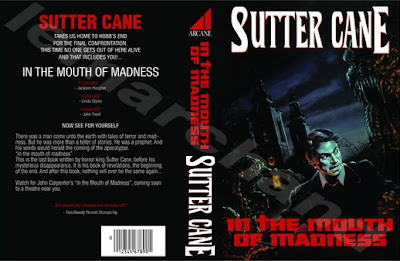 My main gripe with the film is where Craven's New Nightmare fully supported the horror genre by using it as a positive thing, Carpenter's film could be interpreted by an audience who don't know Carpenter's movies and love for horror as an attack on both the genre and it's fans. Let me make it clear, this is not how I interpret the film, I just think it leaves itself open to that option. Overall an entertaining and solid horror piece which still managed to leave me feeling slightly disappointed as it had ideas that could have made for a classic, however it's still definitely worth seeing.

Email ThisBlogThis!Share to TwitterShare to FacebookShare to Pinterest
Labels: In the Mouth of Madness, John Carpenter

Great review! Will have to re-watch this soon.

Thanks Ty, despite being slightly disappointed the film didn't achieve it's full potential, I did really enjoy it.

Great review! If I remember correctly, the film suffered through some push-backs and maybe even a few reshoots, but I'm not sure on that last bit. Like you mentioned, not up to par with atmospheric classics like The Thing or The Fog, but still uber creepy Lovecraftian like horror. Still, Neil's performance is great. I'd say this and Vampires are Carpenter's best offerings from the 90's.

The bicycle scenes really stuck with me.

RobocopsSadside. Thanks, much appreciated! It just doesn't get better than The Thing as far as I'm concerned. Those bike scenes really are quite creepy for how simple they are.

Great review. I wish Carpenter did more films like this - what you call 'meta-horror'. I really loved Cigarette Burns. It reminded me of a novel by Tim Lucas called Throat Sprockets - same kind of storyline. When you see Carpenter in interviews nowadays he seems very cynical and that comes across in these films.

Thanks Jon, I liked Cigarette Burns quite a lot, I just thought it could have been better. I agree re. Throat Sprockets, I really loved that book when I read it. Have you seen The ward yet? I've got it on my rental queue.

The Ward was okay. I saw it in the cinema but honestly, didn't think it gained much on the big screen. The plot was very similar to Shutter Island.

Jon T, I saw it yesterday, okay about covers it. A few good moments but pretty underwhelming overall, without being a bad film.