This is the first in a series of synopses from dvd releases of Hong Kong movies. Ever since I started buying video releases from HK I've found no end of amusement at the write ups of the movie on the back covers. I realised early on the video companies don't encourage proof reading, at least not by anyone who can read English anyway! The fun could be caused by terrible grammar, it could be atrocious spelling or maybe the fact they often give away the entire plot. Usually it's a combination of all three. The films often bare little resemblance to the synopsis as printed and the levels of surreality reached in some cases is hilarious. Be warned spoilers will undoubtedly be found!

For the first in a possibly long running series, here is the synopsis for The Black Panther Warriors, EXACTLY as printed. 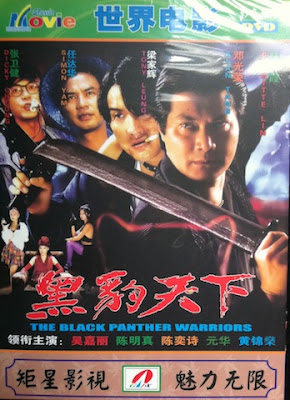 One night, Police Inspector. Chou contact Alan  leader of the Black Panther Warriors asking for his help to steal a box in Police Department in order to check their security system. Because of the attractive reward, Alan accept to take on his task. Alan united 6 warriors of different characters and differenttechniques formed a special team "The Black Panther Warriors"  associated with him in this task. Under the leadership of Alan, the Black Panther Warriors start to check out the leakage in Police Department. They used their own techniques to overcome the difficulties meanwhile it also created lots of jokes andexciting stunt actions. Alan was caught when he stole the silver box. He was so surprised to know that his brother  "Bloody Wolf"  used him to steal the box. Bloody Wolf disappeared for 15 years, but for the silver box, he show up again. There is a lighten paper in the box. Lnorder to get back the lighten paper, the Bloody Wolf start the last war with The Black Panther Warriors.

Ha, ha, great idea Mart... What the fuck inded...fantastic stuff. I can't check it for sure but if I remember rightly the old Thorn EMI pre-cert VHS sleeve of The Wicker Man synopizes the entire film right down to the ending...

Thanks for this. Now please re-translate the subtitles! ;-)

Wes, No excuse for that, at least with the HK ones they're generally make so little sense they don't completely ruin the film!

Judging by the cover you provided, it seems you got a Mainland Chinese copy of a HK film, which would explain the Chinese simplified characters as well as the unintentionally hilarious English translation (called Chinglish: http://www.dailymail.co.uk/news/article-497544/Chinglish-Hilarious-examples-signs-lost-translation.html) By the way, there are books published on Chinglish, check amazon.

When it comes to writing film reviews, summerzing the plot is a real chore, and something I hate to do, I usually try to get the damn thing out of the way in as few words as possible... There's an on/off British horror magazine called Is It Uncut ? and I gave up collecting it because each review began with protracted scene-by-scene breakdown of the plot followed by a much shorter analysis of the film - so you ended up reading about 20% of the mag...

Anon, most HK film fans first exposure to Chinglish will be from the subtitles of the films themselves. Those have been done to death, so I wanted to try something else along similar lines.

Wes, I'm completely with you, I absolutely hate doing the plot summary. I've been trying to gradually cut the amount of plot I include over my last few reviews. A line or two is where I'm trying to get to eventually, however it's easier with some than others. I figure plenty of reviewers / bloggers do detailed plot descriptions that if that's what you want they're easy enough to find. Personally I'm all about the opinion when reading reviews. I've discussed my greatest hate with Mike T (Hong Kong Rewind and Thru bloodshot eyes) which is screen caps but the plot synopsis is a very close second.

Oh for sure, screencaps are pure work, but I feel like I have to include 'em to break up the text. My early posts don't have them and the text looks so boring... Thing is, I get most hits from screenshots on Google Images. I never get my posts listed in Google searches, all those knacks to get listed are beyond my dummy level of computing know-how...

Wes, mine do seem to show up on google searches, I don't know why as I haven't done anything to get them on either.

Actually, the official subtitle translation of HK (not Mainland( ain't too bad, the more hilarious Chinglish is always reading the backcover of the DVD case, particularly if it is a pirated DVD:

Anon, thanks for the link, I've seen plenty of examples of that in HK, they are funny (especially the ones that do seem to be almost correct) but it's the legitimate ones I'm more enamoured with. The ones where it does appear to be translated by an actual human!

Thanks for the wonderful synopsis. Makes me feel good to be alive.

Achillesgirl, More great ones to come, the more I read them the more I enjoy them.