James Cameron's Aliens has always been a tricky proposition on home video formats, from VHS to laserdisc and dvd the film has always been problematic. Today I watched the blu ray from the Alien anthology box set and the results are nothing less than staggering. 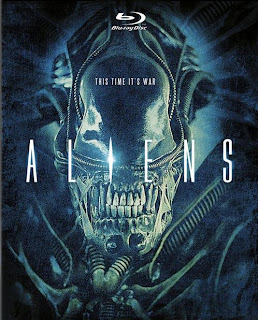 I can't imagine the film looked as good as it does on this blu ray when it was shown theatrically in 1986. The restoration work performed on Aliens is of such a high quality that it's like a gauntlet has been thrown down to any competitors in the field, it simply looks incredible. When the Aliens blu ray was announced, like many people I was worried about talk of grain reduction, fearing a horrible DNR'd mess especially considering how grainy Aliens had always been. I still have the Aliens CAV laserdisc box set, that at the time was pretty much a new benchmark for AV quality, but was still extremely grainy. The blu ray disc is much less grainy but without the loss of fine detail normally associated with grain reduction. The colour timing has also been corrected and the results are stunning, the image is so film like it's hard to believe you are watching a digital format.

Seeing this presentation of Aliens was like seeing it for the first time again. If anyone still needs to be sold on the quality of blu ray see this transfer and compare it to any other version you can, the difference is night and day.
Posted by A hero never dies at 6:58 PM

Wow, I really need to get this ! I remember being so disappointed with the first DVD edition that came out some 10 years, and the similar looking box set edition, thinking the film could not be tweaked any further, so this post really is a sight for sore eyes. I wax and wane when it comes to which one of the two I like the best but for the last few years it's been Alien. I remember well seeing Cameron's film on video when it came out in '86/'87, watching that sequence where the marines make their way through the dalipatated processing station, being completely transfixed, unable to move... The Aliens teaser trailer (posted at my blog) still remains my favourite trailer of all time - extraordinary... Jesus, I really do need to get this !

A pity the movie itself isn't any better. I had some fun with this one when it was new and I was a less-traveled fellow, but it just hasn't held up at all. As the second RAMBO picture was sold by the editing, this one was sold by the pacing, but give it any thought and it has a terrible script, features horrendous overacting by nearly everyone involved, and is mostly just a brainless collection of cliche's and duplicated elements from other (better) movies (including some of Cameron's own), which, in turn, have been re-duplicated so many times since (as a consequence of the success of this picture) that this one has become quite a chore to sit through.

What a load of crap cinemarchaeologist, trying to be contrian just for the sake of it?

Speaking of the alien flicks, I can't wait to see what Ridley Scott has in store with Prometheus

Wes, I actually thought the dvd looked pretty good, especially compared to previous versions. The blu ray really is like seeing it for the first time, it's just amazing! I love both movies, but they're just so different it's hard to choose. Alien is a better film but I enjoy Aliens more and would therefore watch it more frequently, I suppose that tells me which one I prefer. You really do need to get it, you can pick the box set up for around £20 if you get in at the right time.

Cinemarchaelogist, I have to disagree, the film is certainly not without flaws, but I do feel it holds up as a fantastic example of how to do this kind of movie. Cameron has always used broad strokes with his characters and although they do feel a little cartoony, the economy of the set up is perfect for the all important pacing of the film. I think it's harsh to rip a film to shreds for being the basis for the cliched films that followed. Thanks for commenting and your opinion is always welcome!

Anon, I take it you really like Aliens then?

I'm really interested to see what Prometheus has to offer too!

I think it's harsh to rip a film to shreds for being the basis for the cliched films that followed.

I mostly rip ALIENS for different reasons (the cliche' stew in which it swims is made up of things from movies that came before it), but it's unavoidable that when so many aspects of a film are, subsequently, as heavily replicated as is the case here, these elements seem as tiresome in the original film as they do in those that follow. The original LETHAL WEAPON is the same way; in real time, I'd liked it better than the second--revisiting both, the original is now practically unwatchable, while the mostly improvised 2nd holds up much better. (The subsequent entries are like the ALIEN sequels--the least said of them the better)

Interesting, I see your point but I still think it's harsh. I haven't revisited the Lethal weapon films for a long time, I loved the first but they went progressively downhill from there (at least we can agree on that!). I'll have to watch the first one again soon.

Martin, this sounds like a must-buy. Is it the theatrical cut or the director's (which I've never liked)or both. I saw Aliens in 70mm when it first came out - it was mind-blowing!

Jon T. The blu ray features both versions, I'm in agreement, I don't like the directors cut either. It ruins the pacing of the film which is the film's greatest asset for me. Definite must buy which ever version you watch! 70mm must have been awesome, I saw The Thing in 70mm in Bradford and that was one of the best screenings I've seen.

When this was released, I immediately picked it up on Blu-ray. Funny thing is that I only now just sat down to watch one of them and though Aliens is my favorite of the bunch, I chose Alien:Resurrection. I think because that was the one I have seen the least, but I must say just from a technical and visual level, it was a lot of fun. I love Jeanet's visuals, throw in an absurd sci-fi script by Joss Whedon and Weaver being a total badass and maybe even kind of a psycho bitch and it made for a fun time.
I agree with your thoughts on the theatrical and director's cuts of Aliens too. The new footage was cool to see just because we hadn't before the quadrilogy set came out some years back on DVD, but it definitely messed with the pacing and slowed the film down. And it is cliche'd to an extent, but it's so well put together structurally that it's just exciting as hell to watch, even for the 100th time. Cameron may have borrowed from elements here and there, but up until that point nobody had made it look as cool as he did. Am I right my man!?

robotGEEK, You're absolutely right, we're completely on the same wavelength on this one!