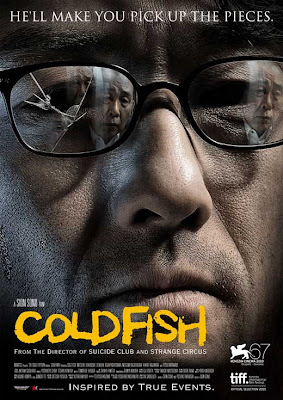 If the poster above reminds you of Peckinpah's Straw dogs, you wouldn't be a million miles away. Sion Sono's Cold Fish tells the story of a down trodden and frustrated man, who pushed beyond the limits of his capacity, is left with nowhere to go. Sono is infamous for Love exposure, his 4hr rumination on religion, family and upskirt photography. While that film was tiring due to not only it's length but the sheer amount of ideas crammed into the running time, Cold Fish chews up your brains and spits them out in a relatively spritely 2hr 24min. For this we should be thankful! 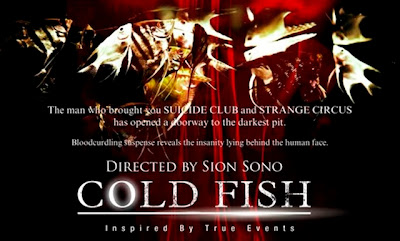 Shamoto (Mitsuru Fukikoshi) owns a small tropical fish shop together with his new, younger wife Taeko (Megumi Kagurazaka) and his daughter Mitsuko (Hikari Kajiwara) from his previous marriage. Shamoto's family, like many families is dysfunctional, Mitsuko hates her step mother Taeko and this causes friction between the three of them. Shamoto does his best to keep the dysfunction hidden behind the veil of Japanese tradition. Enter Murata (Denden) a larger than life, charismatic and gregarious man who helps Shamoto when his daughter is caught shoplifting. The entire family fall for the charms of Murata and his wife Aiko (Asuka Kurosawa) and before long Murata has exploited the weaknesses in the family unit and divided it, allowing him to isolate and expose Shamoto, but to what end? 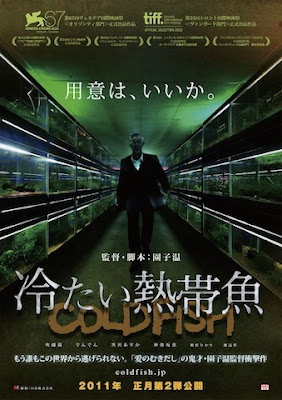 Cold Fish is based around a real life serial killer couple who bred rare dogs, in this film it has been changed to fish and a significant number of other details have been altered, so take the based on a true story element with a pinch of salt. The film shares a similar feel to some of the Coen brother's movies, for much of the running time the film is a jet black farce. Sono's movie goes much further into the depths of depravity than I imagine the Coen's ever would, nevertheless the feel is definitely there.

The acting in the film is generally great, occasionally the characters seem to slide into caricature but this feels like the effect Sono required. Fukikoshi is excellent as the weak Shamoto, for the first part of the film you can sense the pent up rage and frustration but never does it feel like he will release it. As the film goes on and his situation gets ever more dire, you feel the worm has to turn at some point but he does a fantastic job of holding back. Denden (a Japanese comedian and character actor) is amazing as the manipulative Murata, all sweetness, charm and generosity before revealing his sociopathic tendencies when he has Shamoto in his grasp, alternating between extremely funny, petulant and terrifying. The whole film is built around Murata's huge personality and Denden's commanding performance. Asuka Kurosawa and Megumi Kagurazaka as the men's wives are both very good in difficult roles, Kurosawa has the more showy role as she's insane throughout most of the movie. Kagurazaka has a pivotal scene early in the film with Murata where she's incredible, which has great significance at the end of the film. 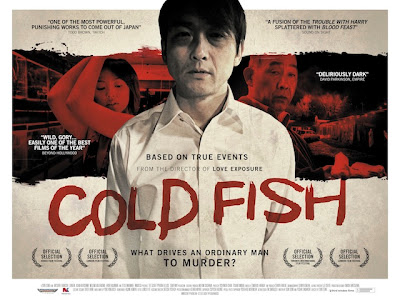 Even though you know where the film may be heading, nothing can really prepare you for the ending Sion Sono provides for the film. It builds slowly and gradually picks up speed throughout before going all out at the end with an almost psychotic glee. While this is a strength of the film, I can't help but feel it's also a weakness as I feel whatever Sono was trying to say is lost in some way amongst the startling imagery he creates. Going back to Straw dogs, Cold fish feels like it's about a man rediscovering his masculinity after years of hiding it. It's a film full of misogynistic acts but yet the men are almost equally badly served and not one character in the entire film could really be called sympathetic. Add to this the dysfunctional family element and religious iconography from Love exposure, along with the tone of the movie and it starts to feel confused and maybe like the whole thing could potentially be an elaborate joke. None of this takes away from the film's power and imagery however. 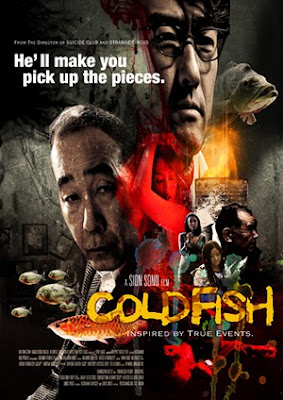 Like much of Sono's work, this will undoubtedly polarise audiences and no doubt cause many to either walkout or switch off. Some maybe turned off by the pacing, and many more by the graphic sex and gore sequences, the blackly comic elements mixed with nihilistic tone may also be too much. This film really does have something to offend just about anyone!

While I really liked the film a lot, I felt like I had endured some kind of blunt force trauma to the head once the credits rolled, that's a serious reaction to have to a film and while I immediately admired it for that I also instantly thought I can't imagine ever wanting to watch it again. Yet after thinking about it for a few hours, I ordered the blu ray and I'm itching to watch it again, make of that what you will! 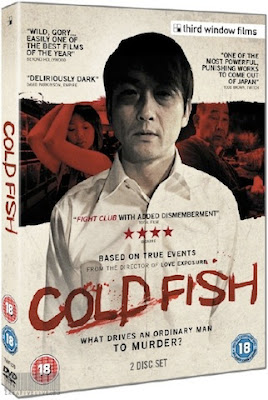 I went to a small screening of Cold Fish a few months back and was blown away by how gutsy it is. It's brutal with its depiction of domestic violence and repugnent misogyny. I think I admired the film rather than like it.

It's gutsy alright, in more ways than one! Really that is to be expected now from Sono. I feel at least another viewing is required to make a final judgement.

I'm currently half way through writing my own review, so I enjoyed the detour to yours. I loved this film on pretty much every level, so am in agreement with most of your observations. Sono does very interesting things tonally. Informative xtras on the 3rd Window Blu-ray, too.

Phantom, really looking forward to your review to see where we differ on it. I've been thinking more about the film and can't help but think I was a little premature posting my review. I may revisit once the blu ray arrives.

I've been reading a lot about this one. You've just made up my mind to finally get my hands on a copy. Great review!
Your reaction to it is pretty much how I felt after watching I Saw The Devil. I felt like it "chewed up my brain and spit them out" for a good 2 hours and I loved every minute of it. :)

See it as soon as you can, it's an amazing movie. I liked it much more than I saw the devil, but I really do need to see that again.