I'll be honest, my expectations for Insidious were not high. For starters it's from the creators of the Saw series James Wan and Leigh Whannel, not a series I have any kind of affection for. Rated PG-13 in the US, another poor sign, the only decent horror movie I can come up with that rating is Sam Raimi's Drag me to hell, as for poor ones, well everything else! Added to this I knew little about the film, which appeared to me from the poster to be another in the demonic child genre, not a genre I particularly enjoy. 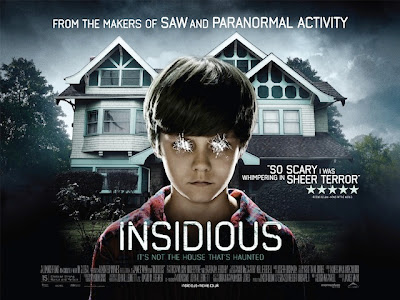 The Lambert family of Josh (Patrick Wilson), Renai (Rose Byrne) and their three children move into their new, seemingly idyllic house. Before long Renai starts to notice strange noises and events happening. Dalton (Ty Simpkins) their son, falls from a ladder when he is spooked in the attic. When he doesn't wake the next morning, he goes into hospital but the doctors cannot find anything wrong. Three months later and he's back at home but still hasn't woken up and the spooky events are getting worse. Renai cannot cope and wants out of the house, Josh agrees and the family move to another house. Unfortunately as the film's tagline says "It's not the house that's haunted" 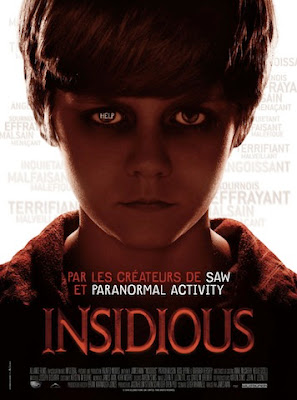 The first hour of Insidious is practically perfect as far as this kind of film is concerned. The film delivers more genuine scares and creepy moments than any film I've seen for quite a long time. The best thing is that these are (mostly) old school scares using actual filmmaking technique. Sure you may question some of the choices made such as the why they have Josh stay late at work, rather than be at home with his wife and children while she is scared out of her wits, but horror films rarely have people acting as they should do and so this is forgivable. 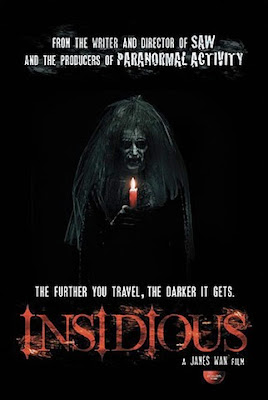 Unfortunately the second half of the film becomes a mess of ideas, exposition and some out of place but actually quite funny comedy moments that bring the film down from the quality of the first half. Crucially the scares also become weaker as Wan decides to show more and leave less to the imagination.

The performances are all solid with the Lambert family coming across as quite believable unlike many film families from Hollywood. Barbara Hershey gets a welcome outing as Josh's mother, I'm not sure what she has done to her face though, it seems to have a life of it's own! Lin Shaye is good as a medium, who looks like she has stepped out of a David Lynch movie but she has to deliver much of the leaden exposition of the film. 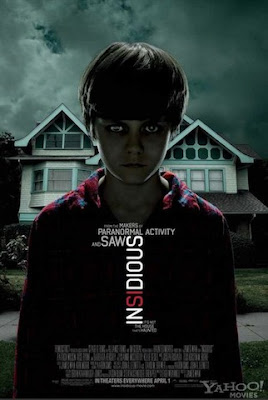 Insidious is best watched cold, so I have deliberately not mentioned many of the details of the scares, it's a tricky balance when writing about a film like this, particularly a relatively newish one as this is. It's not perfect but the first hour almost is and is worth seeing just for that. Some may feel the scares are cheap and not earned but I would disagree, it has some really striking imagery, which coupled with excellent cinematography, direction and sound design makes for a truly creepy film.
Posted by A hero never dies at 7:20 PM

Great review, Martin! I have heard some good things about this movie and your write up has sealed it for me. I'm going to go to the vid store tomorrow and see if this is out yet. Sounds interesting!

Great review! Heard this was really good, will have to check this out when it hits DVD.

Thanks for the review, Martin. I was interested in this one and now will give it a go. Did you see The Hole? Another kiddie horror that I though was actually quite frightening

Thanks Brian, I'm not sure when it's actually out on dvd. I'd love to know what you think of it!

Ty, It's definitely worth checking out!

Jon T, I forgot about The Hole, loved that film. I'm a huge fan of Dante and it had some really creepy moments, I'm thinking of the light bulb scene in particular but in general I thought it was a perfect intro to horror for children and it dealt with some pretty heavy stuff. Hope you enjoy Insidious when you see it!