As a child up to the age of eight or so, I absolutely hated cricket. During the summer when I wanted to be watching kids tv, my dad would have the cricket on all day and I would moan and moan like kids do when they don't get they're own way. Eventually I gave in and asked my dad to teach me the rules and to explain what was happening every ball, I must have driven him mad! A love of cricket was born and by the time the Ashes of 1981 came around my excitement was at an equivalent to Christmas level. 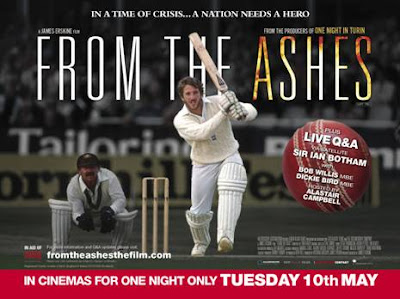 James Erskine's documentary film about the superhuman heroics of Ian Botham during the 1981 Ashes series covers both the English and Australian sides of the story as well as grounding it in the social context of the time. Namely Margaret Thatcher's attempts to strangle the unions of Britain and the by product of taking down the working classes with them. The disharmony and riots that followed are covered, and the film talks of the need for a feel good event for the English to take their minds off their troubles and celebrate. As well as the Ashes series, the event of that summer was the marriage of Prince Charles and Lady Diana Spencer and the two in tandem are shown as changing the feel of the nation. 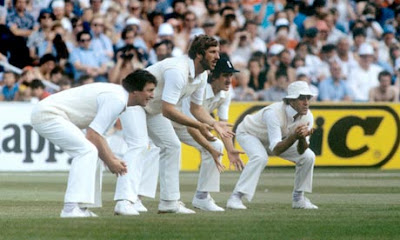 Botham was England's best player, a young belligerent and no nonsense player of immense talent who the snobbish English cricket establishment couldn't ignore. A rebellious man who did things the way he wanted, Botham was made captain of the England team and things went pear shaped from there. By the time the Australians arrived many people were calling for Botham's head and when the first two games of the series didn't go to plan he resigned/was sacked. One-nil down in the series, for the third game at Yorkshire's Headingley ground England brought back Mike Brearley as captain. Brearley was never a good enough player to be in the England team but yet made a fantastic captain, due to his man management skills. More importantly the removal of the burden of captaincy from Botham allowed him to play with freedom again and play he did! From a position in a game of bookies offering 500/1 against odds against an England win, Botham took the game by the scruff of the neck and through a combination of skill and a fair amount of luck battered the Australians and got England back into a game they should have been hammered in. Bob Willis provided his own heroics with as long and intense a spell of bowling as you could ever see. England had won!

In the next game the Australians bounced back and were coasting towards victory. Brearley, with one last throw of the dice asked Botham to bowl. An unbelievable spell of 5 wickets for 1 run from 28 balls gave England a second win from the dead in two successive matches and completely destroyed the Australians spirit. 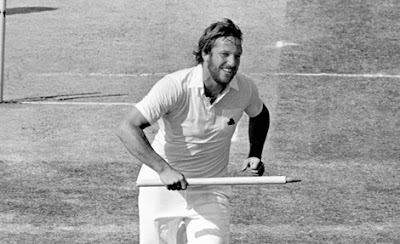 Erskine's film is a very entertaining and enjoyable 90 minutes, with the sporting aspects being much more successful for me than the social aspects which feel a little clumsily intergrated. The Australian side of events as told by captain and vice captain at the time Kim Hughes and Rodney Marsh is fascinating and is a story worthy of a film on it's own.

The structure of the film has a mixture of archival and contemporary interviews and plenty of footage from the actual games, combined with narration from Tom Hardy and music from the around the time (including New Order's Ceremony, one of my favourite songs ever.) It's a must see for anyone interested not only in cricket but any sport. It's a truly inspiring story of myth and legend.

From the Ashes does a fantastic job of showing why Botham became a hero to a nation. It serves as a reminder of how important sport can be in shaping the memories of a time and how every now and then an event such as this can create a true legend that can transcend the world of sport.
Posted by A hero never dies at 5:43 PM

Email ThisBlogThis!Share to TwitterShare to FacebookShare to Pinterest
Labels: From the Ashes, Ian Botham, James Erskine

I luv cricket, gonna try that movie for sure! :D
nice blog btw, keep it up!
+followed

Thanks Magixx, I'm sure you'll love it!

Cricket? That's about exciting as watching grass grow! Haha. I much prefer football, rugby and ice hockey, at least you don't fall asleep while you are watching it!

Anonymous, that's a common misconception about cricket unfortunately. The film is worthy of any one's attention, cricket lover or not!

On a cricket theme; I guess, like me, you'll probably have watched the jolly good 'Bodyline' mini-series when that was on in the mid-eighties, featuring a brilliant young Hugo Weaving as Douglas Jardine. If you didn't, then you should try and give it a watch, I remember it being jolly good fun.

note to self... should probably use the phrase 'jolly good' a little less...

Dan, Yes I saw Bodyline, and rewatched it a couple of years ago, had to import the dvd from Australia! It was a great series.

And, I'm glad that Bodyline stands the test of time. Think I might order it for my pop's birthday...