Otto Chan's Devil's woman from 1996 covers all the bases for a category III flick of the time, featuring gory violence, Elvis Tsui Kam Kong, bizarre events and last but not least some easy on the eye starlets not afraid to get naked. 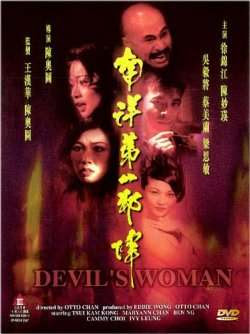 Elvis Tsui plays an SDU officer who takes part in a hostage rescue which goes disastrously wrong resulting in multiple deaths. As a result he is referred to a shrink (Marianne Chan) to help him get over the traumatic visions he's suffering from. May (Cammie Choi) is a struggling actress, underpaid and abused by cast and crew alike and desperate for fame. She essentially sells her soul to the devil in the form of a sorcerer (Ben Ng) in order to become the starlet she always dreamed of being. This comes at a price of course and that is May has to "work" for him and this involves plenty of exploitation mayhem!

There is more to the plot, but while not wanting to give too much away, it also makes little sense and it feels like elements were thrown in to see what would happen. Some of this works, others not so much and the result is a real hodge podge of a film. 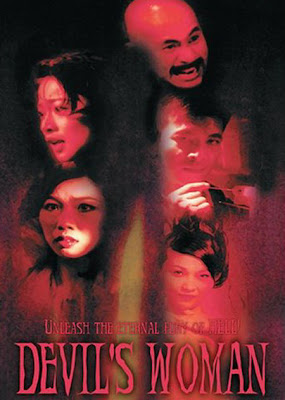 Of course most viewers won't be giving too much thought to the plot and will be revelling in the fun elements of the film, of which there are plenty. Even though Devil's woman doesn't have the excesses of many of it's contemporaries in the category III genre, it's still a pretty tasteless entry and fans are unlikely to feel short changed here. Perhaps the most tasteless moment comes during the hostage rescue at the beginning of the film. Where a pregnant woman is repeatedly hit in the gut with a shotgun, before being blasted with it through the back, causing the foetus to shoot out of the woman's stomach and hit Elvis Tsui, no wonder he needed a shrink! Another highlight is what must be the funniest and most rewarding microwaved animal in film history (thankfully it's clearly not real). 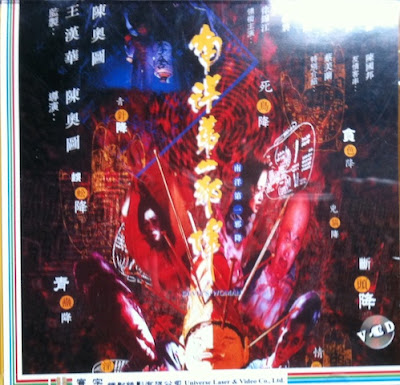 Elvis Tsui puts in his usual dependable turn, but to be honest it isn't a role that was ever going to be too taxing for him. Marianne Chan is pretty good as the Dr. and Cammie Choi does well as the actress and as the devil's worker. Helena Law also pops up in a familiar granny role and is good fun.

It isn't a film about the acting though, it's about the sex, nudity and violence and it delivers plenty of all three. In fact if anything it feels a little padded with all the naked flesh on display, although this won't be an issue for many! It also borrows extensively from other films and feels quite derivative. None of this takes away the more fun aspects of the film and you should know whether this is a film you'll enjoy or not!
Posted by A hero never dies at 6:52 PM

Naked flesh is not an issue for me ! Mart, where do you dig up these obscure movies from... I like to think my stuff can be esoteric but you definitely put me back in my box !

I like to keep a nice mix going, not sure it's the right thing as far as stats go, if recent numbers are anything to go on but I like to cover a wide range of genres.

The mix is always good, keep it going. The blogger stats are mostly inaccurate I think, mine have gone haywire anyway since I stuck the adult content disclaimer up front. I'm having fierce problems with blogger though, I have to log in everytime, I have trouble leaving comments using my ID and my Followers display periodically disappears...

I've had my fair share of similar problems with blogger Wes, including the issues you mention but also stats for individual posts going down for no apparent reason.