The Book Of Lists Horror

During my short time as a part of the blogosphere, it's become apparent to me that bloggers love a good list. It doesn't really seem to matter what the list is of as long as it relates to their blog in someway, anything goes. I enjoy reading them but have yet to compile any lists myself, maybe I'll do something soon.

Anyway, while I don't usually post about books I've either bought or been reading, I recently picked up The book of lists Horror put together by Amy Wallace, Del Howison and Scott Bradley. I've enjoyed it immensely so I thought I'd give it a plug. It's a great dip in and out book for list or horror fans and if you happen to like both it may well be book nirvana for you!

The book features lists on a huge variety of horror subjects but mainly movies from a host of horror experts and luminaries and Eli Roth! Actually his list, just to give you a taste, is about the ten nastiest genital mutilation moments in film, what else would it be. On a different level, another list is Tim Lucas' Top ten horror films that aren't horror films.

The book of lists horror may not look like much but it's highly recommended. 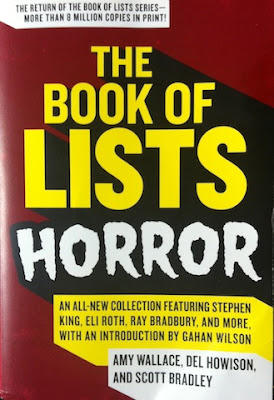 Email ThisBlogThis!Share to TwitterShare to FacebookShare to Pinterest
Labels: The book of lists horror

I forgot I have this book sitting at home. Thanks for reminding me. Can't wait to dust it off and give it a read. I did skim through it when I first bought it and read Eli Roth's list... I was thinking about posting his list on my blog a while back with visual aids. Maybe I'll do that in the future!

Aaron, that would make for a hell of a stomach churning post!

Many thanks for this Mart, I'm gonna pick this up right away...

Yeah, I do like a good list but I find myself wasting loads of time obsessing over the order to place thing in, and so on... Here's one I can dash off now, which originally was part of an abandoned post...

Ten Directors Who Got the Sack

I've already got a similar book to this somewhere which one of the TV Guides published a while back. I'll have to dig it out and start plagiarising it. :)

Wes, I know what you mean, did I forget something? Should that be number 8 or 9 etc. It can be a nightmare! Cool list of yours too.

Dr.Blood, when you dig it out, I'd love to know the name of it, I've enjoyed this one so much I'd love to have something similar.