I became a Spidey fan during my childhood through comics and cartoons and while there have been many highs and lows in the Spiderman universe throughout those years, I'm still a fan. At his best, few superheroes can match Spidey in terms of pure fun and enjoyment.

Sam Raimi's trilogy of Spiderman movies was a bit of a mixed bag, a solid opening chapter followed by a truly excellent sequel (still for my money one of the best superhero movies ever.) and a hugely disappointing final chapter (although perhaps not quite as bad as some people would have you believe).

The disappointing reaction to that movie brought about a re-think for the franchise and a reboot was decided as the way forward. Marc Webb, director of 500 days of summer was chosen to direct the new movie with Andrew Garfield to star as Peter Parker/Spiderman. The first trailer has just been released to coincide with this weekends Comic-Con.

I've tried to avoid spoilers for this movie, so I've deliberately not researched it as a result these thoughts are just gut reactions.

1. Andrew Garfield, as young as he looks, strikes me as too old to play Parker. This is not a deal breaker by any means but I had it in my mind that they were going for a more Ultimate Spiderman style and he seems to old.

2. I don't like the first person view for the action sequences, I just think it's a terrible idea. The film is still a year away so it's feasible this could change based on the reaction to the trailer.

3. The costume looks cool, I like it much more than the previous film versions. 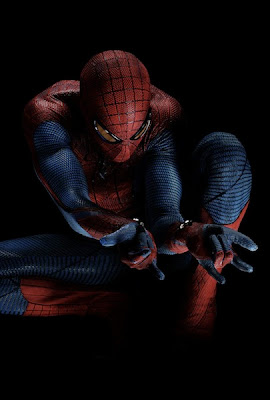 It's hard to gauge much more, although the trailer is pretty long it doesn't give much away. I'm still excited for the movie but overall I found it a little underwhelming. I'd love to know what anyone else thinks, please leave a comment.

I love Spiderman, but it's kinda soon for a remake/reboot of Spider's origin story. I mean the last "origin film" of spiderman was in 2002, not that long ago relatively speaking. Can't they just continue with another Spiderman story instead of going back to his origin again?

Magixx, I'm looking forward to it but I have to say I'm a little underwhelmed by the trailer.

Anon, I agree completely but in these days of bigger is better the reaction to Spiderman 3 was a disaster and they obviously felt something had to be done to rescue the franchise.

Judging from the trailer's tone & the interviews from Marc Webber & Andrew Garfield, this one looks like it's gonna be gritty and darker than the previous ones. Very cool :) can't wait

Apparently the footage shown at Comic-con was much better than the trailer, so it could still be great.

Hopefully it'll erase the pain that was Spidey 3. I must admit, I like the first person sequence. After 3 films watching Spidey swing around, it makes a nice change. Now, if they could only do Venom properly ....

I'm with you Rich, the attempt at Venom in the third movie was awful, it would be great to see the character done justice sometime.