Studio Ghibli's latest animated wonder is The Borrower Arrietty retitled Arrietty for it's western release, with a screenplay from Hayao Miyazaki based on the novel The Borrowers by Mary Norton. The movie marks the directorial debut of animator Hiromasa Yonebayashi. 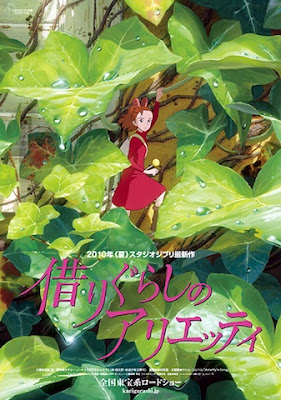 Arrietty is a Borrower, a race of tiny people who live amongst the humans and "borrow" from them what they need to live and be comfortable. All the time being careful not to take something from the "Human Beans" they might miss and absolutely never be seen by them. Arrietty lives with her family under the floorboards of a house. This house gets a new inhabitant when Sho, a sick twelve year old boy comes to stay. On his arrival he spots Arrietty in the garden and this glimpse piques his curiosity and sets in motion a chain of events that could spell disaster for The Borrowers.

The film is instantly recognisable as a Ghibli movie in both aesthetic and thematic style, the unmistakeable character designs and the remarkable detail in the backgrounds give away the movie's heritage immediately, added to this the familiar themes of nature and environmental concerns, a strong female teenage protagonist, illness and a split family. It doesn't seem to matter how many times Ghibli and Miyazaki cover familiar territory, it always feels fresh and exciting and Arrietty is no different in that regard. However, what the film lacks is a little of the Ghibli magic, for a film with this subject matter it's maybe a little too grounded in reality, it's a minor point really as it works very well in this pseudo realistic manner. 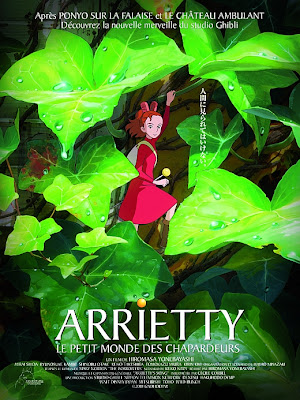 Arrietty is another great central character in a long line of them from the studio, intelligent, resourceful, courageous and full of spirit. Much is made during the film of how fragile the borrowers place in the world is and how it doesn't take very much to endanger them, with Arrietty's parents this is understandable. Her mother is a terrible worrier and her father, while stoic is very much set in his ways, refusing to accept that a different path can be taken. Arrietty on the other hand gives you hope for the future, as she adapts to different situations in a way her parents cannot or will not. This spirit comes from the odd relationship that blossoms between the centimetres high Arrietty and Sho, the small and weak boy with a heart complaint. A strong bond is created between them that gives them both the strength they need to face their individual problems. 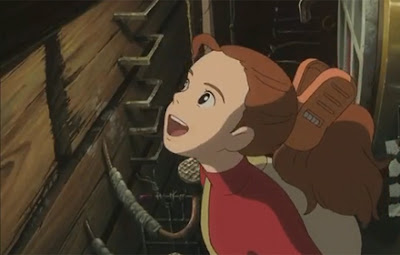 The film is brought to wonderful life through the incredible animation and the amazingly sumptuous detail in the backgrounds. Whether it be the beautiful garden or the tangible spaces between the floorboards the borrowers have made their home, it all feels wonderfully real as they move around from their tiny world into the human space.

Space is a huge word here, the scenes of Arrietty and her father traversing the human world are some of the best scenes in the film, with a tremendous sense of scale and scope. This is helped by some wonderful sound design that really places you in the middle of the action, a scene where they enter Sho's room to try to borrow a tissue is a fantastic example of this, as they walk into the room, you can almost feel the noise from a ticking clock. There are numerous examples of this throughout and it adds immeasurably to the movie. It's to Yonebayashi's credit that on his debut effort he achieves such excellence, and leaves me full of confidence that Ghibli has a director who can carry the torch when Miyazaki stops working. 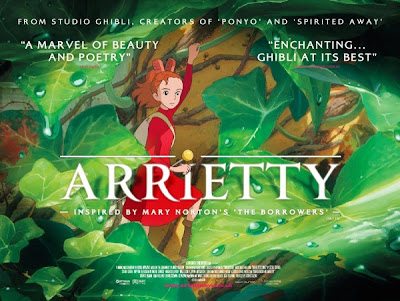 Arrietty is a charming and delightful movie that I would highly recommend to anyone, and if not top tier Ghibli, then that's only because it would have to be perfect to reach that level, it's pretty close though!
Posted by A hero never dies at 6:52 PM

Good stuff M, I'll look out for this one because I do like the Ghiblis... What I love about their films is the completely immersive environment they create for the 90mins or so. Must dust off my copy of Spirited Away for a screening. The last Japanese anime I saw was something called Paprika, a nice slice of mind-bending sci-fi. There's a good UK Blu-Ray.

Thanks Wes, the immersive environment you mention is certainly present here. Do you have favourites from the Ghibli catalogue?

Yes the Paprika blu ray is excellent stuff, I've just ordered Summer wars and The girl who leapt through time on blu from Zavvi for £6.85. They are both great, if you are looking for more anime to see!

I love Miyazaki's films. To my opinion, they are superior to any Disney or Hollywood animation I have seen. The beauty of Miyazaki's films is that they don't talk down to children. They respect their ability to grasp ideas.

Two of my favorite all time films are Miyazaki films: "Nausicaä of the Valley of the Wind" and especially "Laputa: Castle in the Sky". Utterly brilliant. Words cannot do it justice. If you haven't seen those films, you MUST see it.

Both great films Anon. My personal favourites are Porco Rosso and Princess Mononoke.

Yeah, and the fact that Miyazaki concentrates on telling a great story with interesting characters first and foremost. What a contrast to the usual priority in today's animation: trying to sell as many toy or video game merchandise like so many Hollywood movies. Now in fairness, some of the Pixar's films are pretty good, but they pale in comparison to Miyazaki. He is the master of Japanese animation, no question about it. He really can feel you with a sense of wonder and longing. When was the last time a American animation can evoke that feeling?

I'm very enthusiastic about this, and your review enhances my feelings.

My Ghibli favorite is MY NEIGHBOR TOTORO, SPIRITED AWAY, NAUSSICA, and PORCO ROSSO.

I enjoyed WHISPERS OF THE HEART, too. A little gem.

OTOH, am not completely sure that "Ghibli has a director who can carry the torch when Miyazaki stops working." Granted that Hiromasa Yonebayashi shows promise -- and Isao Takahata definitely has his fans too -- but for me, the best Hayao Miyazaki films are unsurpassed in their charm and movie magic.

And for those who are interested, my top five favorite Ghibli films are (in order of most favorite): PORCO ROSSO, MY NEIGHBOR TOTORO, PONYO ON THE CLIFF BY THE SEA, KIKI'S DELIVERY SERVICE and SPIRITED AWAY. Though I think maybe it's time I rewatched NAUSICAA again soon. :)

Thanks Phantom, if you haven't already you should check out Wes' blog Plutonium shores, it's great stuff! Your Ghibli choices are excellent, all truly great movies! I haven't seen Whispers yet but I do have it to watch.

Hi YTSL, I think the greatest strength of Arrietty is the strong direction, and although nowhere near Miyazaki level as yet, Yonebayashi could well be our best hope for the future of Ghibli. Again, excellent choices of favourites, in particular I'm really pleased to see Porco receiving so much love. Totoro would have been my next pick behind Mononoke and then Spirited Away.

Even mid-tier ghibli films are usually miles above anything else. I'm curious!

I'm glad you like Porco Rosso as well, as that's one of my favourite ones. The fist fight at the end could easily be placed in a top ten list for best fight scenes of the 1990s. In my books anyway.

A. I just love how old fashioned Porco Rosso is, and yes the fight scenes are awesome. They remind me of the fight in They Live, I wonder if Carpenter had seen it.