G-Men from hell based on Mike Allred's comic book was directed by Christopher Coppola and is one hell of a difficult film to review. Being a fan of Allred's comics and knowing the world of Snap city makes appreciating G-Men from hell much easier than if you don't. Even when you do know kind of what to expect, the film is bewildering and wildly uneven and this coupled with a distinctly low budget feel and some heavily stylised performances will have many viewers giving up on the movie inside ten minutes. 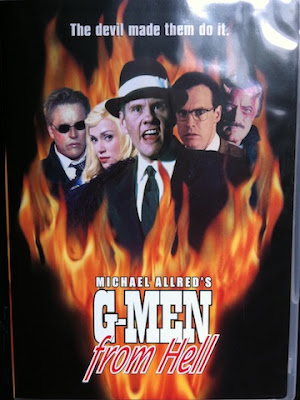 Mike Mattress (Tate Donovan) and Dean Crept (William Forsythe) are the eponymous G-Men who are assassinated, gunned down in the street, and wind up in hell. Believing they don't belong there, they break out looking to do good deeds to earn redemption and a place upstairs. After stealing a crystal from the devil (Robert Goulet), they escape back to Snap city and set up a P.I service. Their first client is Gloria Lake (Vanessa Angel) who believes her husband is trying to kill her. From there it gets weirder as mad scientists, zombie devils, pink robots, a puppet and a wannabe superhero named Cheetah man all become involved.

Originally published in a comic called Grafik Muzik the story of G-Men from hell was never completed, until Allred incorporated it into his Madman comics series. The story features in issues 17-20. 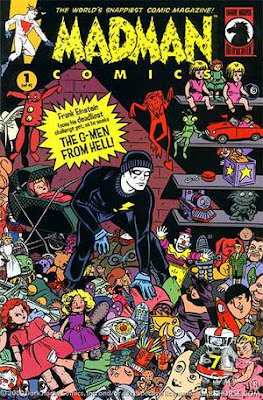 It's hard to know where to start with G-Men from hell, it was a troubled production from start to finish with producer interference, crew being constantly changed and apparently even actors being fired. It's a miracle considering all this that the movie is actually amazingly faithful to Allred's comic book world and story telling sensibilities. This is both the films biggest strength and biggest weakness. I have to admire the cast and crew for going for it in the way they do, as this film was never going to have any crossover potential to a mainstream audience. It's mix of film noir style detectives, 1950's science fiction and pop culture superhero influences is just too heady a concoction for most.

Unfortunately the Allred world needs a budget to create and that budget was just not there for this movie. As a result the movie suffers with some unbelievably poor sets and the most threadbare vision of hell I have ever seen, resulting in a dilution of Allred's Snap city which makes the crazy story and stylised dialogue that much harder to accept. Allred's comics have fantastic colouring that really bring the pages to life and in the movie this is not the case, for the most part it looks drab and lifeless. Indeed it made me question if the long rumoured Robert Rodriguez film of Madman could ever come to fruition. 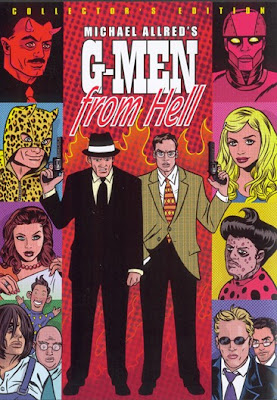 The best thing about G-Men is the cast and many who choose to watch the movie will undoubtedly be drawn in by it's tremendous selection of cult favourites, in particular William Forsythe and Gary Busey. Forsythe is the rock of the film, holding it all together even during it's craziest moments. While Busey is very funny as a homosexual cop, he's on screen for only a few minutes and was reportedly fired from the production before it wrapped. Vanessa Angel provides a performance that is sure to polarise audiences, playing a femme fatale with a dumb blonde voice it's either a great performance or one of the worst in movie history, I can't decide!

Strong back up is provided by Tate Donovan as the obnoxious Mattress and Robert Goulet makes for a great devil. Also featured are Zach Galligan, Bobcat Goldthwait and Kari Wurher, quite a cast for such a low budget movie, Coppola obviously has quite the contacts book!

The opening credits of the movie are interspersed with panels from the comic book which detail the hit on the G-Men. This works very well and if you are unfamiliar with Allred's work and you like the look of the art, I highly recommend giving Madman a go. Coppola's direction also merits a mention, with great use of angles to create a nice comic book feel.

As a huge fan of Michael Allred's storytelling and artwork, I enjoyed and appreciated G-Men from hell but I couldn't honestly recommend it to anyone unfamiliar with his work. To be fair to Coppola he managed to get a comic book movie made that is more faithful to it's creators original work than most other comic book films and that is to be celebrated, however in this instance it seriously reduced it's potential audience.
Posted by A hero never dies at 5:07 PM

Got to love Gary Busey! Will have to watch this one day, what a cast!

this is movie is so awesome! i even think the low budget was good, like you can really feel the love in it, the love and respect for allred's work. and gary busey is just wonderfull in it!