A series of book or magazine style publications called Hong Kong panorama were published alongside the Hong Kong international film festival between 1997 and 2003, I have one of them, the 1999-2000 one. I picked this up at the Kubrick store in the Broadway cinematheque building in Yau Ma Tei, in 2008. They had others at the time, but unfortunately I only found them right at the end of the trip and by then my luggage was already rammed full of goodies, so I picked that one and had to leave the rest.

I re-read it today and it features a great mix of articles on many of the films made in the year covered, now I would like to get hold of the others. If any one has any of them which they would be willing to part with (for cash or trade) or knows where I could get them I would be very grateful indeed.

Here is the cover for the one I have, I know it doesn't look like very much but it's a very interesting read. 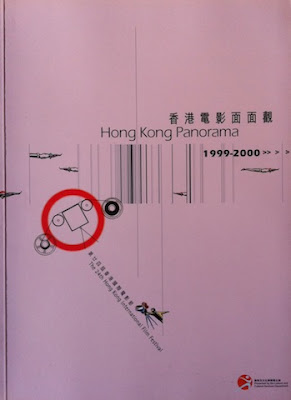 The articles include interviews regarding Spacked out, Bullets over summer, Tempting heart, Running out of time, The Mission, The Victim and 2000 AD. Actors including Anthony Wong, Francis Ng and Lau Ching Wan are also interviewed, this is only around half of the content.

It really is a shame they don't do it anymore, presumably as the industry became more depressed it was decided not enough quality films were being made to keep the series going.

Anyway as I said, any help locating issues (I'm not sure that's the right word) would be very much appreciated.
Posted by A hero never dies at 4:53 PM

Hi YTSL, They only have the last one and I had a poor experience ordering from them before, but thank you fro the suggestion.

I have 2 of them, the 15th and the 23rd film festival books. I ordered them from Ebay a long time ago. If I see any more I will let you know.

A friend of mine,Glenn, from the 'A Pessimist is Never Disappointed' blog is heading to HK in a week or two. Maybe you, or I , can ask him to keep an eye out. He has helped me immensley in the past with HK cinema books. He just GAVE me two huge Hong Kong Film Archive books. Free! He's one of the most generous people I have come across on the net. I'm sure he wouldn't mind helping you out.

I can look for them. You think the Kubrick shop will have them? I've been there once but didn't spend too much time there.

Kingwho? Did you enjoy them and can you remember what was in them?

Glenn, That is very generous of you to offer, I will email you.