The original Death Wish film based on the novel by Brian Garfield caused a real storm of controversy upon it's release in 1974. Michael Winner's movie cleverly exploited the sociopolitical fears of the rising crime rate at the time and made a hell of a lot of money while doing it.

Death Wish was one of the first 18 rated films I ever saw, this was back in the mid 80's and even then at a young age I was aware of it's reputation. Unfortunately I was too young to appreciate the movie at the time,  so this viewing was long overdue. 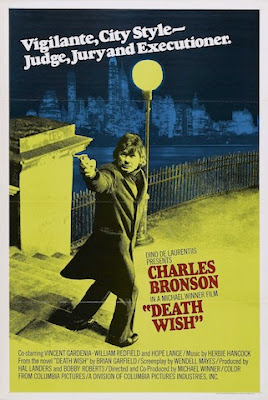 Paul Kersey (Charles Bronson) and his wife (Hope Lange) live in the urban sprawl of New York, Kersey is an architect and lives a comfortable life. This comfort is turned upside down when a group of thugs target Kersey's wife and daughter for a robbery and burst into their plush apartment. The vicious attack follows that leaves his wife dead and his daughter institutionalised. When the police cannot track down the attackers Kersey decides to take matters into his own hands. With a gun hidden, he walks into the night to provide New York with his own brand of justice.

Death Wish is a pretty slickly made film, with decent performances from all the main players, especially Bronson. Some of the muggers are a little unintentionally funny seen in 2011 but that aside it holds up very well. The attack on Kersey's family is harrowing even now, with a young Jeff Goldblum terrorising Kersey's wife and the two other thugs humiliating the daughter. The power of this scene is carefully calculated to push the movie's pro gun and vigilante viewpoint, in a wouldn't you do the same sense. To back this up the film's use of language is very specific, with extensive use of the word c**t during the attack being relatively rare even today. Some of the dialogue feels like it is being delivered as short monologues rather than in anything like real conversation, further reinforcing the film's political stance and desire to stir up controversy. Added to this the film's sympathetic portrayal of the official's and the police investigation into the vigilante murder spree leaves the audience in no doubt as to what the movie wants it to think. 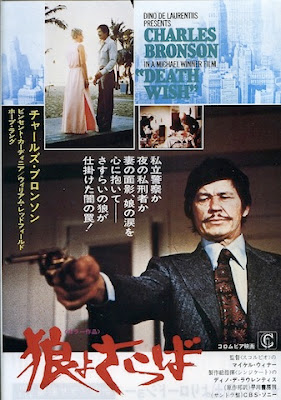 One of the most interesting features of the movie is that Kersey never actually tracks down the killers of his wife, they are never seen again. Kersey is happy to serve justice to any scum he can tempt into attacking him. Another great feature of Death Wish is the lack of interaction Kersey has with the muggers he kills, for the most part they do the (jive) talking and he does the shooting, with no quips as he dispatches them, just intensity.

A huge movie for Bronson in particular, while he had been around for a long time, Death Wish was the movie that cemented him as a true box office draw and provided him with the screen persona that he would play for most of the rest of his career to varying degrees. Indeed he played the Kersey role in four increasingly outlandish sequels, the first of which is more than hinted at in the excellent final scene of this film. 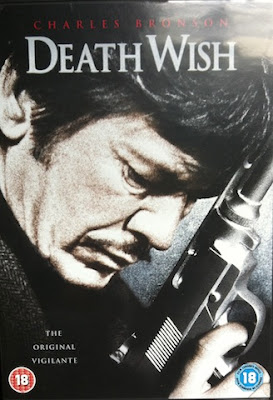 The most recent region 2 dvd release of Death Wish from Paramount in 2006, presents the film uncut and in anamorphic widescreen. The image quality is simply stunning for a catalogue title. Rich in detail and with excellent black levels and shadow detail, the quality of the dvd really took me by surprise.

A classic film, that feels just as relevant today as it would have at the time, the right wing politics of the movie may not be fashionable but regardless of your leanings towards left or right, the moral questions the movie asks of the viewer will never disappear. The message ultimately is no matter how liberal you think you are, there's a Charles Bronson ticking inside us all!
Posted by A hero never dies at 3:37 PM

Well, my blog seems to have eaten my review of this, which is a little odd...

Any how, I think you have been extremely generous with your assessment of this movie. Still, different strokes and all that jazz...

Speaking of which, I'm a little shocked that you have neglected to mention, what I think is the only worthwhile element of the production; Herbie Hancock's terrific score.

Many thanks M, a great review and thanks for the heads up on the disc - I'm gonna get this right away...

Charles Bronson...he's the man, no question about it. It's interesting how much negative press the original film got, but the fact that it was popular meant that it hit a nerve with the public. Heck, how many of us secretly wish we could dispense some of our own justice when we see some punk acting out his asshole behaviour...

On another note, while the original can't really be considered a classic in the well-reviewed conventional sense, it does share a common illness with another "real" classic, Jaws. Both Death Wish and Jaws are afflicted with the law of "diminshing sequel". Each film are followed by successively worse sequels. The Death Wish sequels were forgettable, but remember "Jaws 4"? Wow, now that was a real stinker...

Dan, Interesting comment, up until now, I'm struggling to think of anything that we have disagreed on, certainly from my perspective of reading your stuff.

Just to knock it on a little further, I didn't mention the score as I didn't rate it. I found it a little inappropriate at times, although not enough to complain about.

Wes, Thanks and I hope you're as knocked out by the dvd quality as I was.

Anon, It's certainly classic Bronson, and I think it's a much better film than it's given credit for. Good point about the diminishing sequels, I always had a soft spot for Jaws 2 and Death Wish 3 though!

Hmmm... interesting indeed; as you say, we do tend to agree on a lot of things. Still, this really rubbed me up the wrong way and I found a lot of the characterisation / narrative to be clunky in the extreme: laughable, at times...

As for the soundtrack, I guess I've listened to it away from the film enough to just like it as a Herbie Hancock album in its own right...

Dan, Do you like Bronson at all? I find the button pushing the film does fascinating.

Ty, Thanks, I don't remember much of the later sequels just that they were so far over the top, as I said though I really enjoyed 3.

I don't think I've watched much Bronson apart from 'The Dirty Dozen' and 'The Magnificent Seven', apart from 'Farewell, Friend', which I love. I have nothing against Bronson, it's just the clumsiness of the direction and script, rather than the politics which offend...