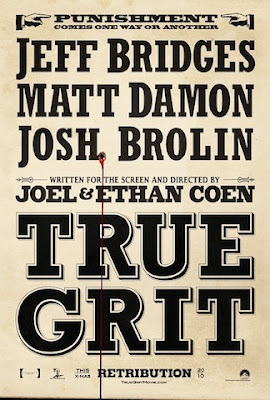 One of, if not the most crowd pleasing and accessible movie of the Coen brothers career, True Grit still shows plenty of their trademark wit and weirdness to satisfy their long term fans. Unjustly overlooked at the 2011 Oscar ceremony despite receiving ten nominations, the film is a triumph on every level. While touted as a remake of the 1969 film of the same name for which John Wayne won an Oscar, the film is actually a more faithful representation of the source novel by Charles Portis. 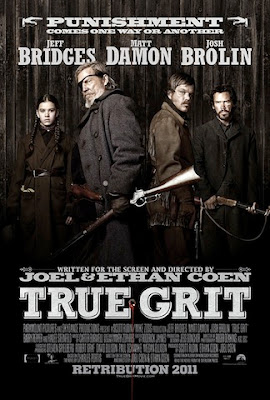 After the murder of her father by Tom Chaney (Josh Brolin), Mattie Ross (Hailee Steinfeld) attempts to find a U.S Marshall with enough of the titular true grit to track down and bring the killer to justice. Rueben "Rooster" Cogburn seems to fit the bill, thanks to his predilection for shooting his prisoners. Unfortunately he also has a similar predilection for laziness and swigging whiskey but Mattie puts her faith in Cogburn. A trio is formed when La Boeuf (Matt Damon) joins them, he's a Texas ranger who has been tracking Chaney for months. They cross over the river into Indian territory to find the wanted man. 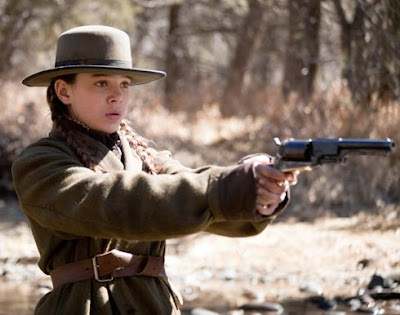 True Grit has two huge performances at it's heart. Jeff Bridges is absolutely outstanding as Rooster Cogburn, I suppose it isn't really a surprise how good he is but I didn't expect him to be as funny as he is. Much has been made of the mumbling delivery of his lines but once you get a handle on it, it's easy enough to understand. As great as Bridges is, movie newcomer Hailee Steinfeld is even better, standing toe to toe with a showboating Jeff Bridges is no mean achievement. She carries the role of the incredibly smart girl to perfection, running rings around the other characters in the film mentally, while still having the vulnerability of a young girl in the old west. The fight between the two characters as to who is the more stubborn is at the core of the movie and is present in almost every scene they share. Matt Damon is also excellent as the Texas ranger whose opinion of his own intelligence is a little overrated. Unassuming at first, his strength comes to the fore as the movie progresses. Excellent support is provided by Barry Pepper and Josh Brolin amongst others. 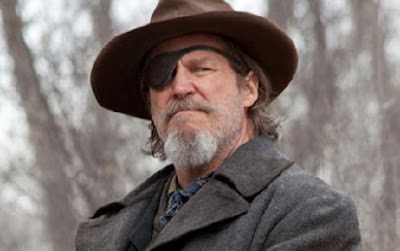 The joy of the movie comes from the incredible use of language, always one of the Coen brothers strengths. The movie this most reminds me of from their ouevre is Miller's Crossing, which happens to be one of my favourites of all the Coen's films. True Grit shares a similar use of wordplay with that film as well as the unmistakable music of frequent Coen collaborator Carter Burwell. The attention to period detail is fantastic with the set and costume design looking perfect. An exceptionally rich atmosphere is created here that is only intensified by the beautifully classic photography of another frequent Coen's collaborator, D.O.P Roger Deakins. The film's widescreen vistas are works of art in themselves and need to be seen on as large a screen as possible. 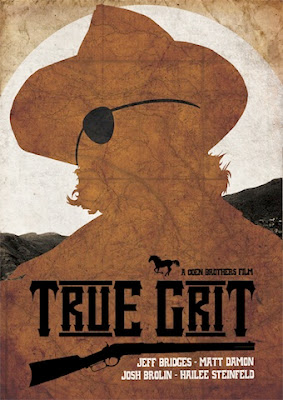 The Coen brothers have done it again with True Grit, delivering a wonderfully entertaining, perfectly crafted movie that retains the idiosyncratic flavour that's unique to them, while leaving behind the cynicism they usually bring to the table. A must see movie and one that will truly stand the test of time.
Posted by A hero never dies at 7:10 PM

I loved this one as well, but I think I need to see it again. I feel like there is so much I missed.

Larry, it's a movie I could watch frequently without ever getting bored of it, it's just so well put together.

True Grit was a great film! Also the last poster on your review is really cool!

Ty, it's a custom I think, it is really cool as you say.

Wow, you definitely like the film much more than me. I generally found it too stagey and too wordy by half. The only scene that really worked for me -- and got my adrenaline on abuzz -- was that involving the snakes.

But, then, none of the Oscar nominated films for 2011 really blew me away (I include here "The King's Speech" and "The Kids Are All Right".) All in all, I think of this batch's Oscar winners, the only one that lived up to its hype was "Inside Job".

How highly do you rate the Coen's in general? It's interesting that you thought it was too verbose, as I said the language was one of my favourite parts of the film.

I agree with you about the other contenders this year, which is why I thought True Grit should have won in at least a couple of categories. I should add though that I haven't seen The Fighter yet, which I expect to really like.

I do still also want to see Inside job, which to be honest I've been putting off to keep my blood pressure in check!

In general, the Coen Brothers' films don't excite or impress me as much as they do many of my friends (one of whom goes on and on about "Fargo", another of whom really, really loves "O Brother Where Are Thou"). Looking at their filmography, my personal favorite of their work must be "Raising Arizona" -- it felt so quirky and fresh when I caught it back in 1987!

Re the Oscars: I think 2010 was a far better year than 2011 -- I absolutely loved "Up", also connected very much with "Up in the Air", actually liked what I saw of "The Hurt Locker", enjoyed "Julia and Julia", etc. -- though my favorite film of that lot is the Foreign Language Oscar winner ("The Secret In Their Eyes") rather than an English language work.

That perhaps explains it YTSL, I'm a huge fan with Miller's crossing probably my pick. I do love Raising Arizona too though, thanks for your comments.

I thought this was a cracker - my only annoyance was the repeated music cue, which sounded a little too much like 'Waltzing Matilda', not to be distracting...

Dan, I didn't get Waltzing Matilda at all, it just sounded like music of the time to me, although I can see why that would have annoyed you!