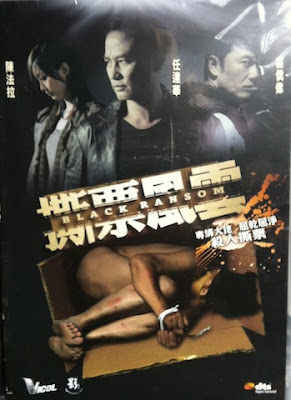 Black ransom is brought to you by the writer and director team of Wong Jing and Keung Kwok Man, the duo responsible for 2007's Bullet and brain. If that doesn't exactly fill you with confidence then I don't think anyone would blame you!

Mann (Simon Yam) is a former top cop, relegated down the ranks after struggling to deal with the death of his wife, all he has left is a teenage daughter, oh and some jedi like powers he calls "The feeling". Mann is called upon to investigate a series of ransom kidnappings of prominent triad members, when the kidnappers lead by ex cop Sam (Michael Miu) take out the cocky A team of cops assigned to the case. Mann uses the feeling to puzzle out the case and try to take down Sam's team of vigilante kidnappers. This being a Wong Jing script, it's all full of holes and seriously convoluted by the finale. 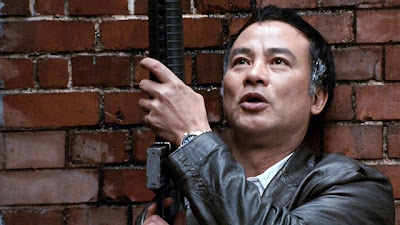 Black ransom isn't a terrible film, it has a few decent action sequences, particularly a sniper scene. The actors are mostly pretty good with a supporting cast including Fala Chen, Andy On, Liu Yang and Xing Yu. On the other hand it's not a good film either, it feels lazy, unconvincing, over earnest and pretty laughable in places. In fairness the laughable parts help to keep the film reasonably entertaining, otherwise it's so straight faced that the unintentional humour is very welcome. Although it does stop you taking the drama element of the movie seriously.

Most of this humour comes from Mann's feeling powers, as good an actor as Simon Yam undoubtedly is I'm not sure he knew quite how to play this part of the role. He's fine in the dramatic and action parts of the movie, but when it comes to the feeling moments, he alternates between looking in deep concentration, confused and heavily constipated or pregnant (maybe both). I'm not sure what else he could have done with it but the result is pretty funny.

A passably entertaining action thriller then but certainly nothing to get excited about, I'd say file under time killer. It's an improvement on Bullet and brain, so at least Keung Kwok Man is heading in the right direction but if you have seen that movie you will know that isn't saying much!
Posted by A hero never dies at 4:35 PM

One can't expect too much from a film by Wong Jing. He's a crass and exploitative filmmaker and makes no apologies for it. At the same time, his films are guilty pleasures to be savoured every now and then. I confess while Wong's films are not exactly oscar-material, I do enjoy watching them.

Every now and then being the important part your comment!

Whenever I hear people discuss Wong Jing it's always in this apologetic tone and that even though they think he's not so great, they actually like him a bit?

To be fair, I don't rush out to see his films, but they are occasionally more watchable than they deserve to be. Nothing I'd recommend to the non-hong kong obsessed though.

A. I've said this before but my opinion is that he's an intelligent man (how else did he get with Chingmy Yau looking like he does?) who knows what audiences like. If the budget is there to provide that he does eg. Naked Killer if not then he's a master at making the audience think they're going to see what they want without actually delivering eg. 90% of his output.

He also has a third side for the likes of Ann Hui's The Way we are, where he produced without credit, thinking his name would put audiences off a film such as that.

Yes, I'm still very surprised by that, especially since he apparently had feuds with Hui. It always reminds me of how Mel Brooks produced Eraserhead and took his name off the promotions so his fans wouldn't get the wrong idea!

The way we are is a film so great, I want to write about but everytime I think about doing it, I'm just not good enough to articulate why it's so amazing!

Well fairly or not, people judge a filmaker by the record of his work. So if the bulk of his work are of a certain type or genre, exceptions aside, that is how the world will see him.
Some of Wong's films are quite watchable, I do like God of Gamblers, for example, that was pretty good.

Wong Jing can be a guilty pleasure but, as others have eluded to, he does come out with a cracker from time to time.

Because of 'Magic Crystal' and 'The Last Blood' I could probably forgive him anything... He's a Hong Kong director who I also like to see in front of the camera too.

Anon, I agree that is how a filmmaker should be judged, I like God of gamblers too, but not because of Wong Jing, that film is all Chow Yun Fat!

Dan, Haven't seen Magic crystal, but I do remember liking The Last blood and I recently bought the dvd to revisit, but anything? Even I corrupt all cops? That was a terrible movie, drunk Anthony Wong aside!

'I Corrupt All Cops' was cack. I think I mean that I'll always say that I like Wong Jing, even though I think a lot of his work is just rubbish.