Written and produced by Wong Jing and directed by Bosco Lam, The Underground banker is another category III movie from the golden age of the early 90's. The mix of lowbrow comedy, sex and violence is familiar territory by now but what makes this movie slightly different is the structure of the different elements that are more clearly defined than usual. It also features Dr. Lamb in a supporting role! 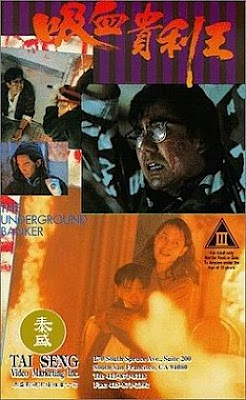 Ming (Anthony Wong) is a normal Joe, a truck driver by trade and living with his wife, son and his sister. The family move into public housing when a space suddenly becomes available, only when it's too late do they find out why the space opened up, the apartment is next door to the recently released Dr. Lamb. Ming's wife Kitty (Ching Mai) an ex of Canner, a local triad, gets involved in a stock market deal that goes badly wrong and ends up in debt to the tune of $40,000. Kitty doesn't want Ming to know and so goes to Canner's loan shark brother Chao (Ho Ka Kui) for the cash. Things go from bad to worse as she can't pay her debts and is forced into prostitution to pay her way. One of her clients is a truck driving friend of Ming's who reveals the indiscretion to him. When Ming steps in to help, he only makes things worse and events spiral out of control to the point where the triads set fire to the apartment with Kitty and  their son Tak trapped inside. Ming snaps and goes after Chao with a new found friend to help him. 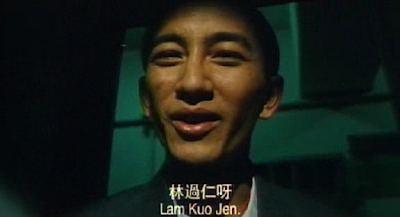 As I mentioned before The Underground banker feels different to most of the other category III movies I've seen, here the comedy is pretty much restricted to the first half of the film and once it turns darker it stays darker, almost right through to the end. Most of the humour here is only mildly amusing, it's kind of sub Benny Hill for the most part (it is a Wong Jing production after all) but the Dr. Lamb parts are very funny with Lawrence Ng Kai Wah doing a pretty good Simon Yam impression. The movie picks up when Kitty makes the deal with the broker, and from there on in it has just about everything a cat III fiend would want to see. Personally I would have like it to have been more violent, the potential was there it just seems to hold back a little, when you have Anthony Wong teaming up with Dr. Lamb you expect some serious carnage, right?


The cast are all pretty good, Anthony Wong is good but seems a little subdued compared to some of his other similar films, although his Bunman parody is brief but excellent. Lawrence Ng Kai Wah is fun as Dr. Lamb and Ching Mai is really good as Kitty. The best performance in the film is from Ho Ka Kui who steals every scene he is in, he's great fun. As for poor Tak, what is it with kids being burned in category III movies?

The biggest problem with The Underground banker is the script, with characters making stupid decisions at every possible opportunity. Of course I realise this is not the point with a movie like this but it's quite hard to ignore when it's so frequent. Still credit where it's due, having Dr. Lamb as the neighbour was a stroke of genius, it's a real shame they couldn't get Simon Yam to do the part.

The Underground banker seems to be OOP, I had been searching for this for quite a while and couldn't find it anywhere, so it's with thanks to Charlie Parker at Chanbara Spurt for pointing me in the right direction.

If you like category III stuff, I see no reason why you wouldn't like this. I don't think it's as well made as something like The Untold story or Dr. Lamb but I really had plenty of fun with it. If only it had really been Bunman and Dr. Lamb together, how awesome would that have been?
Posted by A hero never dies at 4:15 PM

Awesome! One of my favorite HK films. I've seen it a handfull of times and I ALWAYS have so much fun with it. A definite dark comedy winner. And when doesn't Ho Ka-kui steal a scene in ANY film he's in? Love him!

If you want to see Karel Wong Chi-yeung in another role as a shit heel, check out the CAT III film, The Rapist Beckons, with Lily Chung Suk-wai and Ridley Tsui Bo-wah. It's a very effective rape-drama. It was released on Joy Sales so it's available. Highly recommended.

In what format did you watch Underground Banker on? The pics look fairly clean.

Why do the chracters make stupid decisions? Well, you don't look for logical plotting in a Wong Jing film...

Kingwho? The version I saw was a laserdisc rip I think, It was perfectly watchable.

Anon. It's a fair point but some of the decisions are beyond any kind of Wong Jing logic!