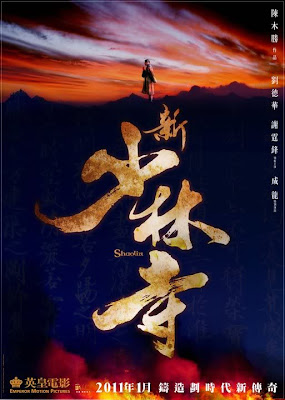 Of all this years lunar new year movies Shaolin was the one I was most looking forward to, with some real talent in front and behind the camera and a fantastic looking trailer I had really high hopes of an excellent movie. The movie has received some pretty good reviews but unfortunately I disagree with them.

Andy Lau stars as Hou Jie, a wealthy army general who loses everything when greed clouds his judgement, so busy is he with his own scheming he fails to notice events happening around him until its too late, as his right hand man Cao Man played by Nicholas Tse betrays him. As Hou Jie hits rock bottom, he seeks refuge in the Shaolin temple. While Cao Man searches for Hou Jie, Hou Jie rebuilds his life around the Shaolin monk philosophies.

Shaolin has many problems, the first one for me is Andy Lau. I like Andy Lau, I really do but I've always considered him a star more than an actor. The films he does his best work in are films like Infernal affairs and Running out of time, those two films are star vehicles, Andy gets to do his thing while other more capable actors do the real acting. It isn't that I think he cannot act, I just feel he is limited in his ability. This may seem a little harsh but I don't think he has the range to pull off the transformation the story arc of Shaolin requires, and that is a huge problem here. The screenplay is also at fault, the four credited writers for the movie give a disjointed feeling to the characters and storyline, but I'm convinced a more suitable actor could still have done a better job. 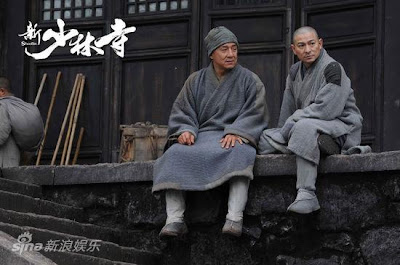 Nicholas Tse overacts throughout and unfortunately this role is a step backwards after some of the good work he has done recently, again some of this is down to how the character is written but Tse is way too far over the top to work as a serious villain. Jackie Chan has a supporting role as a cook, he puts in a solid performance as the man who helps Andy Lau on his road to redemption. Jackie has to have an action scene and you know its coming. Unfortunately its another flaw in the movie. It feels completely out of place as he helps a gang of kids fight off soldiers in his usual comedic style. The scene completely took me out of the film as its placed between much more dramatic scenes. It's a shame as up until that point his performance had worked very well and is a pointer for how his career could continue when he quits the action scene. Wu Jing puts in a solid performance as does Fan BingBing, although both should have been given more to do. 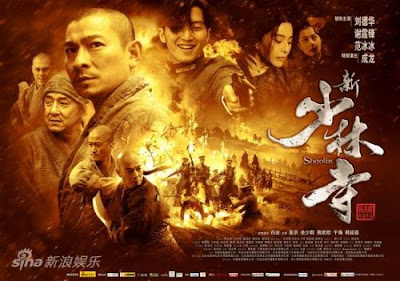 The scale of the movie is impressive, as are the sets and production design, it really looks the part in every department, it's in the drama and to an extent the action where the movie fails for me. Given the misgivings I mentioned about the screenplay I also have to question the direction of Benny Chan and the balance between action and drama. Bodyguards and assassins another recent big budget historical epic faced a fair amount of criticism on this balance (not to mention Leon Lai!) but I think that movie gets it spot on. When it comes to the finale of that film the editing between different character's scenes is just about perfect. In Shaolin this aspect is all wrong, the timing of the switching between scenes feels off.

The double/triple cross scene in the restaurant and the subsequent chase are really exciting and the best scenes in the movie, the rest of the action scenes are okay but nothing special. Given the events of the movie the viewer should be moved emotionally by the film but in this regard it falls completely flat.

Overall I found Shaolin to be a huge disappointment with actors miscast, a stumbling screenplay and mostly uninspiring action. As this years big historical epic this lags way behind Bodyguards and assassins, both emotionally and in terms of action.
Posted by A hero never dies at 9:50 AM

Agree that "Shaolin" lags way behind "Bodyguards and Assassins".

And, actually, if I were to compare it to anything else, it'd be "A Battle of Wits" -- because are movies where it feels like Andy Lau strode into a historical scene/movie but still behaved like Andy Lau the (contemporary) star rather than an actual historical (movie) character.

This having been said, I still managed to get something out of viewing the movie -- I think in large part because I got to watch it on a super big screen (The Grand Ocean's) in Hong Kong and went in lower expectations than you...

A question: have you seen "Little Big Soldier"? It's a surprisingly good Jackie Chan movie, IMNSHO. Not saying much these days but there you have it...

I agree with you both. I find it a bit difficult to get along with films that in part gear toward the mainland market, as I believe Shaolin did. I'm not sure what is missing, but something is? I did however enjoy Jackie's small part. And Little Big Soldier was a great departure for Jackie. I wish more people in the west would welcome a film like Little Big Soldier from Jackie and stop going to see dreck like The Spy Next Door (I went to see The Spy Next Door =P)

YTSL, No haven't seen Little big soldier yet, not for any other reason than I just haven't got around to yet. I can imagine it would be better seen the way you saw it!

Kingwho? Definitely something missing, it just seemed like such a waste of all that talent. It was striving to be emotional but it just doesn't have the heart. I really enjoyed Jackie too, I just didn't think the action scene fit the movie at all.
I haven't seen The Spy next door either, but unlike Little big soldier I have no intention of doing so!

Outside Fist of Legend, I haven't been crazy about Benny Chan's output which I found to be fairly inconsistent (Mind you, I'm basing this just on the Jackie Chan films I've seen of his).

And yes, The Spy Next Door should really have some warnings on the poster that it's from the director of Snow Dogs.

Er... "Fist of Legend" was directed by Gordon Chan. And FWIW, my favorite Benny Chan helmed movie is "Big Bullet".

YTSL, My favourite Benny Chan is also Big bullet, it's a really good action film. I will probably cover it at some point!