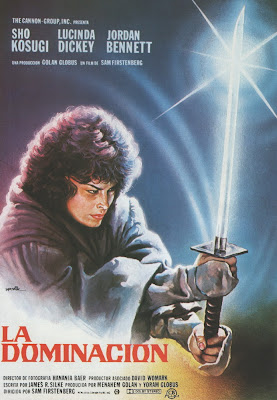 Ninjutsu was a constant source of fascination to me as a teenager in the 80's. Anytime a new ninja movie was released on video, it would cause a new rush of excitement for me and my friends. One of whom was a little older than the rest of us and he claimed to be actually studying this most mysterious of arts. I remember at the time we were sceptical but yet still secretly desperate to see him do something like disappearing in a puff of smoke. To him, his ninjutsu training was like Fight club, he would never speak of what went on those Sunday afternoons but whenever you saw him afterwards he was always badly bruised. The bruising of course, only added to the mystique. I never did find out the truth about what he was really doing!

The closest I ever got to ninjutsu was making my own throwing stars and my brother and I sneaking up on each other before unleashing a flurry of kicks and punches with a cry of NiiinnnJaaaaaa! 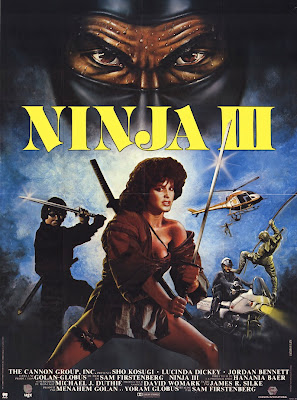 80's nostalgia is rife around the movie blogging and podcasting world, understandably really as many bloggers are revisiting their youth and many more are visiting the 80's movies for the first time. Ninja III: The Domination has to be one of the most 80's action movies of them all. I would suggest even more than the likes of Sly and Arnie's efforts from the decade. Every single second of Ninja III screams 1980's and as a result it's no surprise to find that the movie giants Golan and Globus were behind it.

The film opens with the assassination of an important scientist by a ninja. The killing attracts the cops who engage the ninja and he takes many of them out. Eventually sheer numbers overwhelm him and he suffers multiple gunshot wounds but in a puff of smoke he disappears. On the verge of death he finds Christie, a telecoms engineer working in the area and transfers his ninja life force into her. Christie begins to suffer from unusual events based around a Japanese sword and memory blackouts, during these blackouts the cops responsible for the ninja's shooting start turning up dead. A mysterious man from Japan arrives in town, investigating the crime scenes and trying to track down the culprit, as he says Only a ninja can destroy a ninja. 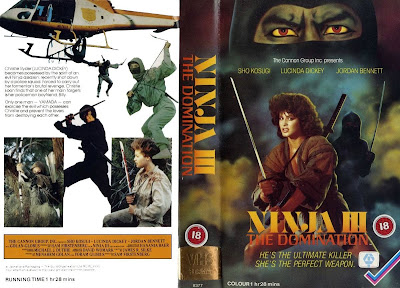 Ninja III: The Domination is a virtually critic proof movie, just the title alone is enough to make sure it would have a long VHS shelf life. Yes it's unbelievably stupid and cheesy but it has a charm that anyone of the 80's could surely not resist. Sure, most of the acting is pretty horrible, much of the action is clunky and many of the scenes laughable but it's never less than a hell of a lot of fun. It's one of those movies where everything that's bad is amusing and that's a rarity for me. The special effects are really awful, with the sword on a string moments a real stand out. As is often the case with films like this, it's the music that really gives away the vintage of the movie and Ninja III is no exception, the soundtrack is truly 80's awesome, and used to hilarious effect. Check out the scene where Christie is freaked out in her apartment and decides to put on some music and dance!

The amount of cool scenes in this movie is incredible, it manages to pack in an aerobics class, a full on exorcism scene, a bizarre seduction scene involving V8 vegetable juice, golf and pool ball crushing by hand and ninja power alone and what must be the hairiest man to ever grace a movie screen outside of a werewolf movie. 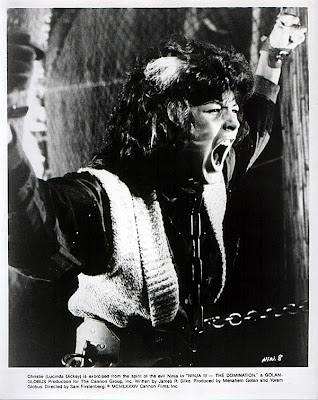 Lucinda Dickey who plays Christie is very game in the lead role and Sho Kosugi adds a touch of class to the proceedings but everyone else is pretty awful, especially the hairy cop man. What she sees in him is way beyond my comprehension and leads to a couple of real WTF moments. After hitting hard on Christie and being rejected equally forcefully one moment, he's then sucking V8 juice from her chest the next. In addition after Chrisite's (awesome) aerobics class her new boyfriend stands idly by watching as four punks intimidate and try to attack her, before she turns ninja on their asses. I don't have any rational explanation for these events, it's just one of those movies! 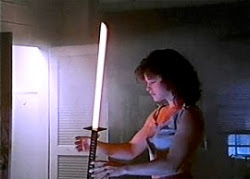 I can't find a listing for a legitimate dvd release of this movie, I saw it on Lovefilm's streaming service and while it wasn't a great presentation, it's 4:3 fullscreen and pixelates quite badly at times, it does the job.

You may well be thinking along the lines of I don't want to see this movie, it sounds stupid. Of course you would be right but it's also fantastically entertaining and pure 80's gold.
Posted by A hero never dies at 5:30 PM

NINJA 3 was a lot of fun back in the day, even though I much prefer the second movie, REVENGE OF THE NINJA. I haven't seen part 3 in years, but I beginning and ending were the best parts for me as well as the exorcism sequence. Saying the bad guy takes multiple gunshot wounds is an understatement! He took more bullet hits than Jason, Freddy and Michael Myers combined. It's amazing though that two sequels were made to that laughable mess that is ENTER THE NINJA, one of the funniest non comedies of all time.

I saw those two way back, but couldn't really remember much about them compared to this one, that's certainly not to say III is a better movie. Yes I know the multiple gunshot wounds is a bit of an understatement!

I've only seen the first film of the NINJA trilogy, but I've been meaning to get around to seeing the other two, especially this one since Lucinda Dickey is in it! I have a thing for her (literally and figuratively). I may have to pick this and part 2 up on VHS sooner than later if I can find them for reasonable prices. Great review!

Thanks Aaron, I'm sure you won't regret picking it up, it has great re-watch potential!

Ninja III is so utterly goofball. I promise you that you aren't powered by nostalgia on your appreciation of this one. I only saw this a few years ago when I got it for free on VHS from an old rental place going out of business. After one watch I managed to re-watch showing it to three or within the next few days. So bizarre, espcially the V8 scene you mentioned.

Great write-up! Got to see this one. Will have to track down a copy.

Ty. It's well worth your time, both finding and watching it.

Yeah, great review Mart. What I would give to time-machine myself back to Mr. Video, the local videoshop in the neighbourhood I grew up in, circa 1987 - these were the days when you had to book the only copy of hot new releases like Robocop, and No Retreat, No Surrender, and you waited until the coast was clear in the shop to check out the Electric Blue videos on the top shelf...

Ninjas were quintessential 80's pop culture... I must have spent a small fortune in the arcades playing Shinobi ("Mission 1...) Anyone remember the other great Ninja trash-fest, Pray for Death ?

Shinobi was awesome! I haven't seen it for years but I have fond memories of Pray for death being the Daddy of ninja films.

I also remember waiting in the video shop for hours for people to bring that one copy of whatever, studying covers to just about everything in there, with maybe the occasional glance towards the top shelf!

Brotha, I couldn't have said it better myself. Just finished watching this one myself, I think around the same time Ty was watching it. Hopefully I'll get my review up this weekend on it.
One thing's for sure though, probably the best time I had watching a movie in a long time. It was completely and awesomely ridiculous. lol.