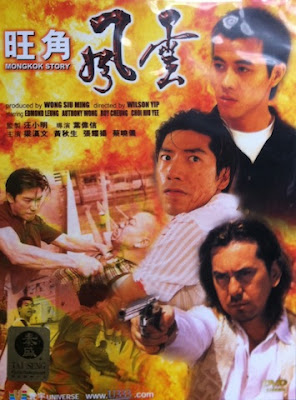 Before going on to become one of Hong Kong's biggest film directors Wilson Yip made a number of low key films, a world away from from the huge Donnie Yen movies he makes these days. One of the earliest was Mongkok story, a triad movie made in the wake of the success of the first Young and dangerous movie. It has a similar feel to begin with but is more leisurely paced and becomes much more off kilter, while still using many of the genre tropes established by that influential movie. 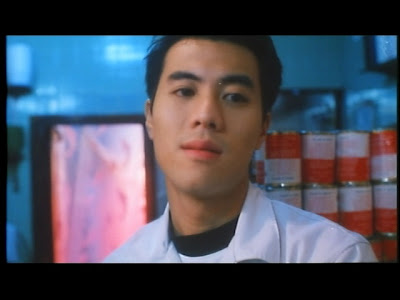 Leung Ping (Edmund Leung Hon Man) is a waiter in a Mongkok cafe frequented by triads who follow Brother Ching (Roy Cheung). Leung sees the triad lifestyle as being glamorous and longs to be involved, inevitably he does gets drawn in to the rivalry between Brother Ching and Brother Lone's (Anthony Wong) gangs. A rumour started by one of Ching's gang about Lone begins an ever more destructive sequence of events, resulting in much posturing and machismo between the gangs before things spiral downwards to the point of no return. 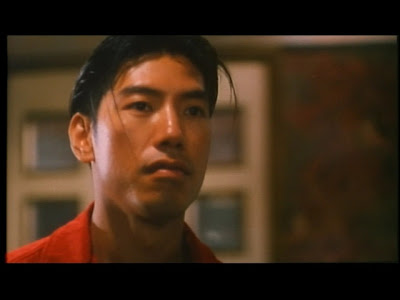 Mongkok story's biggest failing is lead actor Edmund Leung, who lacks the charisma required to carry the movie as his own story. Leung is not helped here by the pairing of Roy Cheung and Anthony Wong who have charisma to burn, the screen comes alive when either are on screen and doubly so in the scenes they share together. Roy Cheung is effortlessly cool in his role as Ching, while Anthony Wong is hilarious as another in his long list of sleazy bad guys, this time as part triad leader part actor, a scene in a cinema showing him starring in an El Mariachi rip off is worth seeing the movie for alone. Wong has his hair long here and I think always looks sleazier that way. Chan Wai Man provides solid support as usual,  he must have one of the most recognisable faces in all of Hong Kong cinema. 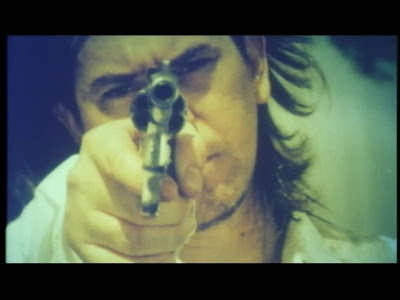 The movie really picks up pace once Brother Lone comes onto the scene, changing from a triad lifestyle film into an almost Shakespearian tragedy/farcical black comedy. That Wilson Yip pulls this transition off is pretty impressive for a movie so early in his directing career. The action scenes are also very impressive, the gang fights certainly being better than similar scenes in the Young and dangerous movie. Mongkok story could have been improved by giving more depth to Leung's character, although I feel the filmmakers may have thought the actor wouldn't have been up to it.  This may be the reason a sub plot set up in the movie, where Leung is shown to be in love with Ching's wife leads to absolutely nothing.

The Universe dvd is a typical Hong Kong dvd of it's time, letterboxed with burned in subtitles and quality that looks like a laserdisc transfer. It's unlikely to look better anytime soon (if ever) and is perfectly watchable, so if you do want to see Mongkok story this is probably you're best option.

While no classic, Mongkok story is a solid entry into the endlessly popular triad genre and stands up pretty well, thanks largely to the screen presence of Roy Cheung and in particular Anthony Wong who raises the movie to greater heights than perhaps the material deserves. I can't believe I managed to get through this without mentioning the Anthony Wong oral sex scene, oops!
Posted by A hero never dies at 2:14 PM

Good stuff M. I saw Young and Dangerous many years ago on TV and I liked it, it had a lot of energy. I should track down some more of these triad films. Obviously, HK Cinema is your great love, but how would you compare the Triad genre with the Yakuza genre ? I'm thinking along the lines of the Battles Without Honor Or Humanity series (I'd be more familiar with Japanese crime flicks )...

Wes, As with any genre you get good and bad examples but usually there will be something to entertain you. List of shame time on the Battles without series, I haven't seen any of them. As far as the Yakuza genre in general goes I'd love to see more but they are generally really expensive to get hold of, I've seen all the Takeshi Kitano ones with Sonatine being my pick and I've seen Tokyo drifter and Branded to kill from Suzuki both of which I loved, any other recommendations?

Suzuki's Youth of the Beast is a good one too, but if if we're talking masters of the genre, Kenji Fukasaku's series of gangster films from the 70's are unmissable - Graveyard of Honor, Cops vs Thugs, Yakuza Graveyard and Sympathy for the Underdog, and of course his massive 5-film chronicle, Yakuza Papers / Battles Without Honor Or Humanity...

Takashi Miike has some good Yakuza films under his belt. Miike is a true iconoclast bending genre conventions to breaking point like with the Dead or Alive series, but his Black Society Trilogy is highly recommended.

Excellent write-up, Hero. You pegged the good and bad, spot on. You're right, the Mariachi send-up alone is worth the price of the DVD. However, the ludicrous soccer game is pretty memorable too. Good times! You made my day, Hero. I'm linking to the Heroic Sisterhood right now!

Wes, Thanks for the recommendations, I'll start trying to track some of those down.

Achillesgirl, Thank you, I did actually write about the silly football sequence, but edited it out as it started to feel too long, but yes it's very memorable with the anime style speed lines.

Mongkok Story slots alongside Street Of Fury in the soap opera sleaze stakes of the Triad boom of the 90s. Mongkok pissed me off the first time I viewed it, so did Y and D but has grown on me since, it's so over the place. The football match is so camp and funny.

Compared to the 70s Yakuza movies, the Triad ones for me don't really compare. The closest to the Triad Boyz films is probably Street Mobster ,where the low level punks come into conflict with the sharp suited pros. Yakuza movies manage to have more of an edge on Triad flicks for the most part. Perhaps because some actors like Noburo Ando actually were gangsters.

Charlie, I'm still trying to track Street of fury down. I think the 90's triad flicks are hard to compare with yakuza movies based on what I've seen, even the most melodramatic triad films are still essentially fun movies where as the Yakuza stuff I've seen is much more serious.

Charlie is correct. Street of Fury is one of my favorite HK films EVER! Top 10 for me. If you are having trouble tracking it down, let me know. I have it in every format =P

It's a fun, slightly tongue in cheek, take on the Y&D films, released in the same year as the first 3 Y&D films. Street of Fury is just fun stuff.

I think I've managed to get it Kingwho? But thanks for the offer, looking forward to seeing it. What do you think to Mongkok story?