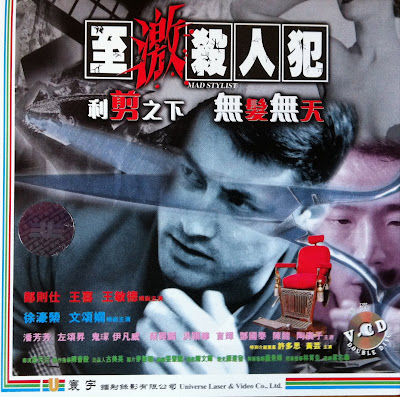 
Dee (Wong Hei) is a wannabe hairstylist but keeps getting fired as whenever he tries to cut anyone's hair his hands start to tremble and he makes a mess of the job. Ever more frustrated he takes a job where he's a dog's body and is bullied by colleagues to boot. Enter childhood lost friend May (Hilary Tsui Ho Ying) who used to protect Dee from being bullied as a child. Cue the love and murders, and improbably Dee finds he can style the hair on the decapitated heads without the trembles! The psycho couple's happiness is put in jeopardy when a brain damaged girl sees Dee dumping a body, May demands that she is killed but Dee saves her instead from a leering transvestite guardian who just happens to be a teacher! Complications ensue when Kent Cheng and Michael Wong's cops start investigating the murders and Dee keeps the girl like a pet dog. It just gets weirder from there! 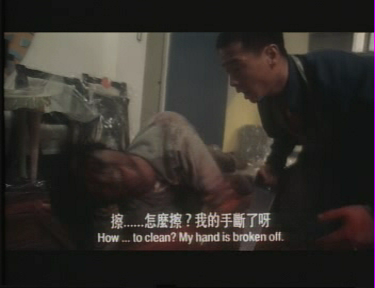 Where to start with Mad Stylist? Steven Yip Tin Heng obviously loves Oliver Stone's Natural born killers and the writer of that movie Quentin Tarantino as the film features multiple nods in the direction of both, with montage inserts of film clips ranging from wildlife film to hentai and splatter anime to ram home his points. The story is told in Tarantino's trademark non linear style but stops short of using chapters, it also uses a blatant "rearrangement" of Dick Dale's surf version of the song Misirlou to further press the link. The whole film seems to be aiming for the tone of a Tarantino movie, I could be wrong though as it's so far from being successful!


Mad Stylist fails as a film on many levels but what it does have is a WTF feel that keeps you watching just to see what it can come up with next. Perhaps my favourite scene in the movie is a karaoke sequence with Kent Cheng and Michael Wong belting out a version of Paul Anka's Diana, it has to be seen to be believed. The category III elements of the movie are quite tame in some respects and mostly played for comedic value, with the first killing being hilarious in it's absurdity. By far the most offensive elements of the film are a couple of instances of real animal killing, in particular where a frog is killed in an horrific manner.

Mad Stylist does try to give Dee and May some psychological depth but it has about as much as Kent Cheng and Michael Wong's musical performance. If you take the movie remotely seriously the whole thing would be pretty offensive in it's story and characters, but to be honest if you did take this seriously you'd be as mad as the stylist!


I certainly wouldn't go out of my way to recommend Mad Stylist but if you have a thing for black comedy serial killer movies with Kent Cheng and Michael Wong singing and a brain damaged girl being kept on a lead, you could do worse!
Posted by A hero never dies at 6:22 PM

hahaha Glad you 'kinda' got on with it. I MUST revisit this one soon. I remember really liking it but have unfortunately forgotten about most of the film. Except for the Cheng/Wong musical performance. That has been burned into my memory. I love it!

Loving these CAT III reviews, AHND. What's up next?

Sounds really crazy. M, I'm intruiged by these Cat III films do they get a theatrical release or do they go straight to video ? Do they turn up on HK TV ?

Kingwho? Yeah Mad stylist certainly has it's share of fun moments, with the musical one being truly unforgettable, particularly if you are fans of the actors!

I'm thinking of doing Underground banker next, I can't go too long without an Anthony Wong fix!

Wes, maybe Kingwho? Can answer your questions better than me, he's the cat III expert. As with any other type of movie when something is successful, copies, rip offs and variants appear and this type of cinema was no different. Some well made and others utter trash, many saw a theatrical release but many more were DTV. As for tv showings I think we need a Hong Kong resident to answer that one!

For Wes M., and everyone else, MAD STYLIST did indeed play cinemas on original release. When we used to have active Chinese language cinemas down here in Aus., that played films fresh out of HK release, STYLIST was one of the many I caught on the big screen. It was passed uncut as suitable for over 15's by our censor.