Lucio Fulci's Contraband aka The Smuggler, The Naples Connection 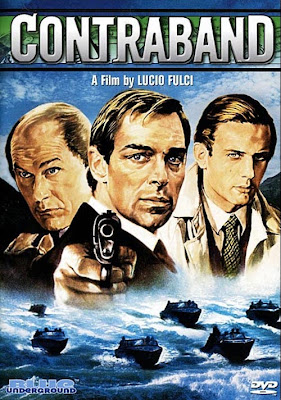 Lucio Fulci's Contraband a.k.a The Smuggler (and The Naples connection) was made in 1980 in between his more famous gory zombie movies Zombie 2 (or the much cooler sounding Zombie flesh eaters to UK readers) and City of the living dead, house by the cemetery and The Beyond. Contraband was a departure for Fulci, although he directed films in many genres, this was his first and only entry into the Euro crime genre. He made a pretty good stab at it, continuing the fan pleasing combination of sleaze and incredibly violent and gory mayhem he had become famous for. Much like The Big heat, the Hong Kong movie I covered here the level of bloodshed is more befitting a splatter horror movie than a crime film.

Luca Di Angelo (Fabio Testi) is a cigarette smuggler in Naples, he along with a bunch of other gangsters run the smuggling operation into Italy. A gang of ruthless drug dealers want to use their route and when they are refused access, the gangsters and their families starting with Luca's brother are targeted by the head of the drug dealers Marsiguese (Marcel Bozzuffi). 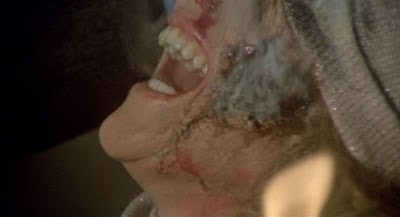 Contraband could have been one of the best Euro crime films of the period, but has two major problems preventing this from being the case, firstly the scripting and dubbing into English are truly terrible and secondly the pacing of the first act is painfully slow. However once the film does get going it's one hell of a nasty ride with a seemingly never ending stream of gory shootings, stabbings and much worse. In fact a face being burned via a Bunsen burner makes for very uncomfortable viewing, worse still though is an incredibly vicious rape scene. 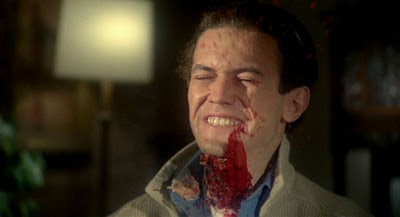 Many people are of the opinion that Fulci was a hack director, and to a certain extent I can see why but in amongst the zooms into faces Fulci and his crew capture some excellent moments, the funeral at sea utilising the boats is an example of a really well put together scene. The ever reliable Fabio Testi puts in a decent performance, at least physically as the dubbing makes it impossible to judge anything else and Marcel Bozzuffi is impressive as the evil leader of the drug dealers.

With a more careful dub and a better paced opening Contraband could have been a classic Euro crime film. As it is, it's a solid genre entry that once you get past the opening half hour and into the meat of the film really delivers for Fulci fans, with all the sleaze and gory violence you could hope to see. Be warned it's strong stuff!
Posted by A hero never dies at 3:10 PM

I really like Contraband, but you're right, the dubbing is simply awful, especially with Luca's kid. I am also of the belief that despite having a number of flaws and imperfections in his filmography, Fulci was an incredible director whose Gilli speak for them self. I think his issue was that he was simply nuts! Which may have been a strength, too!

Yeah great stuff M, the film does have a certain other-ness if placed in a line up of Euro-Crime flicks...Fulci was definitely factoring in the ultraviolence of his horrors into this one. That he didn't do another one of this type suggests maybe he didn't have much affinity for the crime genre, but he makes a good fist of it nonetheless. My big problem with the film is Sergio Salvati's camerawork - the whole film looks impossibly gauzy, and was a mistake to give this type of film this particular look. Are my comments getting too long ? I get all misty-eyed and tend to prattle on when I'm talking about Fulci...

Lump me into the Fulci-haters as I've seen quite a few of his horror films at the late night shows and outside crazy gore, I feel a bit cheated walking out of his films. I haven't seen anything outside his horror films but from what you are saying, I don't think I'll be rushing to check this one out.

Mind you, compared to someone like Joe D'amato, Fulci isn't that bad...I guess.

The dubbing is terrible, but the gore effects were excellent!

Matt, I agree, he had his share of misfires but so does just about everyone else. Fulci's great skill for me was always the atmosphere he could generate with very little in just about any genre he attempted.

Wes, I don't mind how long you prattle on for, go for it. Fulci was one of the first directors whose films I started to seek out way back in the mists of time that was my youth, so I will always have a soft spot for him.

A. I can completely understand that, even out and out gorehounds don't always agree on him. As I said I have a special affinity for his films. If you like the Euro crime genre I would say to give it a try, if not then this will not change your mind on either Fulci or the genre.

Ty, It's a shame an Italian language option wasn't available to bypass the awful dubbing.

This is a decent enough movie but if you're looking for a truly GREAT Italian crime picture you can't go wrong with MILAN CALIBER 9 which has recently become available in America and it was about time too. The old Italian DVDs had dubbed tracks on them, but this film and its two follow ups were crying out for international exposure. If you want a sleazy Italo crime flick similar to Fulci's, Andrea Bianchi's CRY OF A PROSTITUTE towers over it, in the uncut version especially.

I'll track down Milan caliber 9, not so sure about Cry of a prostitue after listening to the coverage on GGTMC!

I reviewed the uncut version which was a fan made subbed/dubbed composite. I have the uncut Italian DVD, but it's Italian only. The US dubbed version is missing a lot of gore and exposition that explains the plot further.

I think a great deal of it and expected a goofy movie on the level of Bianchi's horror pictures, but while it retained the sleaze, it was quite well made overall. Very, very nasty little movie and Silva is amazing in it. Just my opinion, however.

Venoms5, they put me off it because I'm a bit of a wise when it comes to that kind of nasty! It's just not my thing.