After 13 Assassins, (which opens in UK cinemas this Friday) Takashi Miike returns to the samurai movie with Harakiri : Death of a Samurai. The new movie is a remake of the sixties classic Harakiri directed by Masaki Kobayashi. Miike's version stars Ebizo Ichikawa in the lead role. 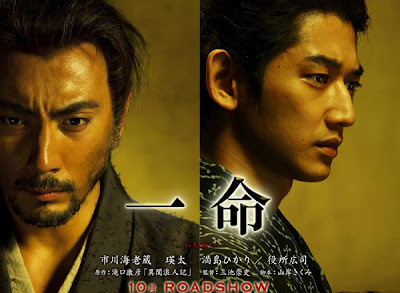 Miike has decided to make the movie in 3D (his first attempt at 3D) and it will premiere at the forthcoming Cannes film festival before going on release in Japan in October. A great looking teaser trailer has been released, and it has really whet my appetite!


The movies official website is here
Posted by A hero never dies at 10:13 AM

I personally don't think Kobayashi's film needed a remake, but I'd still see this. I'm still hoping to see 13 Assassins in a local theater.

I have the original in my collection but have yet to see it.
Thsi remake looks pretty good though, I'll definitely be seeing it, although probably not in 3D.

A. I'm going on Friday, can't wait to see it properly!

Jack. i have no interest in the 3D full stop, but the trailer looks excellent, have you seen 13 Assassins yet?

I have no interest in 3D either, I've seen a few films in 3D and I wasn't impressed at all, now I've given up on it...