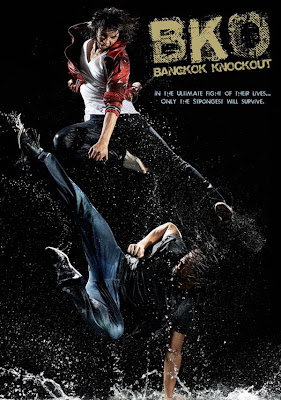 After yesterday's post with trailers to give a taste of Bangkok knockout, here are my thoughts on the movie. Directed by Panna Rittikrai and produced by Prachya Pinkaew the team behind Ong Bak, Bangkok knockout continues the Thai tradition of balls out action filmmaking. Unfortunately it also continues the weaknesses of Thai action filmmaking, namely poor storytelling and acting.

Two rival groups of martial arts students are given the chance to audition for who they think is a Hollywood talent scout looking for the next big martial arts sensation. The winning team are invited to a party afterwards to celebrate. During this party the team are drugged and kidnapped and wake up without any idea of where they are in an abandoned construction site.
The team discover they have been tricked into a life or death struggle, where they are forced to fight for their lives against a select group of fighters, while a group of wealthy gamblers watch and bet on the outcome via cctv. 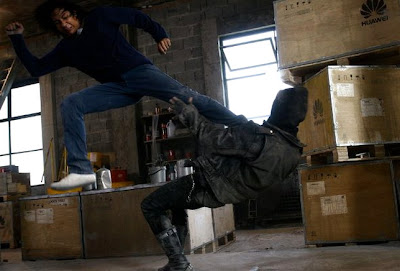 I don't like to give so much of the plot away usually but in the case of Bangkok knockout it really doesn't matter. I saw the film without English subtitles, so I cannot comment on the quality of the scripting but I  don't feel I missed out on anything due to that. The acting is average from the actors who play the fighters, which is to be expected really as they are all martial artists or stunt people, however the actors who play the gamblers are hilariously poor. It's hard to say much more in terms of usual film criticism, it's just that kind of movie. What I can talk about though is the action.

If you read yesterday's post, you will know I was excited about this movie after seeing the trailer and I can honestly say it is amazing, some of the scenes are simply breathtaking and brilliantly shot so you can see the mechanics of the fights. It takes around thirty minutes or so for the fighting to actually start (with a transvestite fighter in lingerie no less!) but once it does it barely stops for the next hour plus. It takes advantage of a vast range of fighting styles, with Muay Thai being the dominant and most impressive one.
You could say some of the action over reaches at times, where it is perhaps too dangerous and so it's filmed slower than you would like to see, the fight under the truck springs immediately to mind. I'm nitpicking really though, and overall it's stunning. 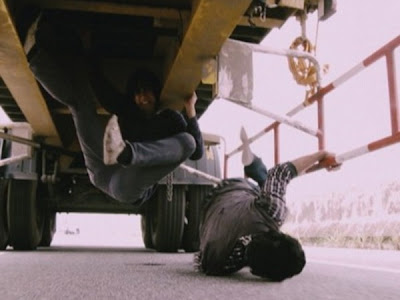 So Bangkok knockout? Well I loved it, but your enjoyment will vary depending on if the action and fighting alone is enough as there is little else here. BKO makes me yearn for a time where this kind of awesome action can be complimented by a decent screenplay, surely it has to happen soon. It's so much fun that on future viewings I'll just skip the first half hour and jump straight into the mayhem.
Posted by A hero never dies at 10:48 AM

Glad you got around to reviewing this so quickly! Most action films from Thailand I've been on the fence a bit about for the same problems you mention above, but I think the ones directed by Prachya Pinkaew I like the best.

From the clips you posted yesterday, I think this is one I'd investigate but I wouldn't go out of the way to see it. Judging by your review, it seems to be pretty much what I expected.

Thanks for this M, I would normally ignore this kind of film (the name would not draw me in). The action sequences look amazing in the trailer. Will this one get a video release in the UK ?

A. Yes, it is pretty much exactly what you would expect. I just can't resist the knee/face interface you get in these films!

Wes, I'm sure it's already listed on hmv. Have you seen Ong bak? If not I would suggest renting first.