James Gunn's Super will draw inevitable comparisons with last years Kick ass, as both films attempt to show what could happen if a person without super powers decided to become a costumed crime fighter in the real world. The similarities do not end there, the two films share a similar tone, with both of them being out to shock with a mix of brutal violence and sick humour, more on that later though. In terms of the final result however the two films are quite different, where by the end of the film Kick ass actually became what the film was attempting to parody, Super sees its vision right through to the end. 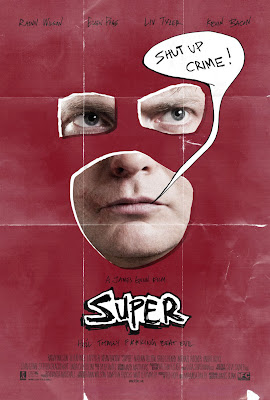 Things aren't good for Frank D'Arbo (Rainn Wilson), he's a 40ish cook working in a diner, married to Sarah (Liv Tyler) a recovering alcoholic and drug user who has lost interest in him. When the inevitable happens and she leaves him for local drugs baron Jacques (Kevin Bacon), Frank takes it really badly. In denial he tries the police, suggesting Sarah has been kidnapped. When this doesn't work he spirals deeper into the depths of despair, and after a vision from God he decides he must fight evil and save Sarah himself.

The Crimson Bolt is born, looking like a fat Daredevil but without the horns, his first attempts at fighting crime are predictably useless. In order to do it right Frank does some research at the local comic book store where he meets Libby (Ellen Page), who fills him in on the comic lore he can use in the fight to save Sarah. When he sees just what he is up against in the form of Jacques' henchmen, he realises he is out of his depth (and needs a pipe wrench!) and pushes himself ever closer to the edge of insanity in search of the skills he needs to defeat the evil drug lord and save his beloved. 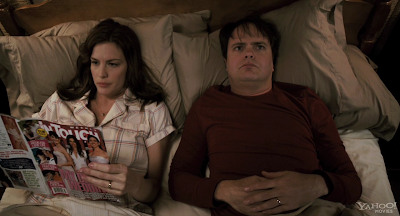 Super will divide audiences into love it or hate it, I can see no middle ground with this movie. Not only does it have something to offend just about everyone, but it has a tone that is irreverent and flippant in the extreme towards every subject the film deals with, including religion, brutal gory violence and the mental health issues the characters clearly have. Its interesting that Super has a middle aged protagonist compared to the teenager in Kick ass, you would expect the teen based film to have more attitude, but this is not the case. Gunn's movie has if anything, too much attitude for many viewers and the film is going to feel like the director is holding his middle finger up to the audience throughout the whole film.

Super plays out as a jet black comedy vigilante movie but with superhero costumes, or alternatively a character study of a sad, over the hill loser who can't take it anymore. Losing his wife to the evil Jacques tips him over the edge into the realms of madness. Its actually both, and this is another issue viewers may have with Super, it feels deliberately schizophrenic and as a result you never quite know where you are during the course of the movie. Of course this can also be seen as the films greatest strength, at a time where comic book movies are everywhere, to have one as unpredictable and surprising as this is very refreshing. 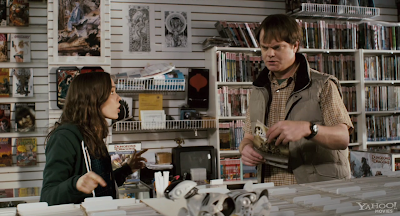 The cast assembled by Gunn is very impressive, Rainn Wilson carries the movie fantastically well. For all his characters self loathing and psychosis, the only times you stop rooting for him are when you know he has gone too far, adding to the complexity of the film, it isn't long though before you are back on his side. His delivery of lines as The Crimson Bolt are extremely funny and he handles his comic action scenes superbly. Kevin Bacon is hilarious as the sleazy, smarmy Jacques, and again his line delivery is excellent. Ellen Page's profane Libby seems at first to be similar to her other Juno style roles before branching out into something very different, she seems like she's having a blast and is great fun. A special mention here for Nathan Fillion, superb as always as The Holy Avenger, in a very unflattering costume.

Technically the movie is adequate, it looks fine but some of the cgi effects work looks poor. The soundtrack is excellent with some great songs and a solid score from Tyler Bates. The hand drawn animated musical opening credits also deserve a mention, they may look cheap but they're tremendously good fun. 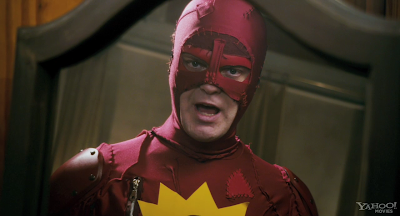 For all the irreverence and flippancy though, Super has heart and its this that makes the movie as successful as it is, without it the films combination of hard core violence, queasy laughs and smarts would have been fun, but hard to love. With the heart that Rainn Wilson provides Super is surprisingly touching yet still as black as night.
Posted by A hero never dies at 5:32 PM