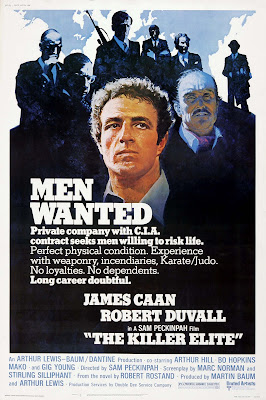 Sam Peckinpah's 1975 film The Killer elite stars James Caan and Robert Duvall as shady operatives for a company that does the dirty jobs the CIA want to distance themselves from. In the guise of an action espionage movie with martial arts elements (added presumably to cash in on the kung fu craze generated by Enter the dragon) The Killer elite is as much a post watergate political thriller filled with fear and paranoia. Peckinpah has fun exploring many of his familiar themes here, particularly the ideas that heroism is an outdated concept in the modern world, and honourable men have become obsolete.

Mike (Caan) and George (Duvall) are working a job, George suddenly shoots the man they were protecting and puts a bullet in Mike's left elbow and knee, telling him "You've just been retired Mike". Caan sets out to rehabilitate his broken body, determined to get back to work and to find the man who crippled him. Its a real struggle but gradually he gets stronger and learns to adapt to his strengths and weaknesses through martial arts. Once fit enough he is welcomed back into the fold and given a job protecting a Japanese politician who Duvall is out to kill. Selecting a team Caan sets out to take down the man who crippled him. 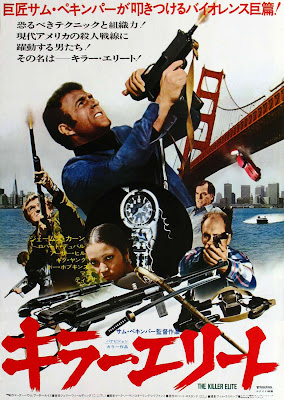 Throughout the movie we see how these men are manipulated and used in others pursuit of power, although learning to adapt to his physicality, he cannot adjust to the new political world he finds himself in, refusing to accept the modern way business is dealt with. As one character asks "Would you believe heroism has become old fashioned?" We can see Caan doesn't believe it.

The Killer elite has much to recommend it, the cast is excellent, with James Caan in particular outstanding as the seemingly immature playboy at the beginning of the movie, through the bitterness and despair of being crippled and the hard yards of overcoming his physical state, right through to the realisation that he doesn't belong in this world anymore. Robert Duvall is also very good, although its little more than a cameo really, and excellent support comes from Bo Hopkins and a fun Burt Young as part of Caan's ragtag team.
The film features some excellent use of locations, with the striking climax of the film taking place in and around a naval ship graveyard, which offers its own commentary on the characters place in the modern world.The martial arts elements of the movie including ninjas don't completely convince, but it isn't as big an issue as it could have been as the action sequences are so well shot and edited.

Overall The Killer elite is perhaps fifteen minutes too long, and could have been tightened up a touch, it isn't Peckinpah's best movie, but is nonetheless an excellently acted and exciting 70's action thriller that shouldn't disappoint.
Posted by A hero never dies at 3:28 PM

It's hard to go too wrong with Peckinpah but Killer Elite isn't my favourite of his. I know someone who's a die-hard Peckinpah fan who has several posters but not this one. I think he said something about giving off the wrong impression with the huge text of "MEN WANTED" on his wall. Hehe.

A. Its not top tier Peckinpah but it does have lots to recommend it. I hadn't even thought of that with the poster, I do think its a cool one though.