Johnnie To's PTU is another favourite of mine from Milkyway image, it features some incredible night time photography of the streets of Hong Kong, and aside from them being deserted it gives an excellent feel of walking around late at night in this amazing city. 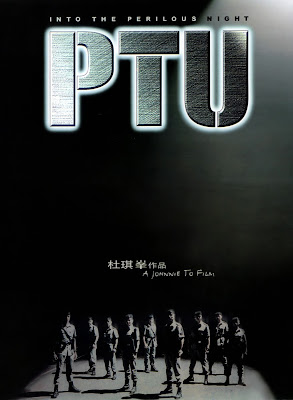 The style of PTU has lead to some great posters being produced for it, the one above being a favourite and the one below also being a nice design. I have the Hong Kong one but haven't got a pic of it, I'll post that another time. 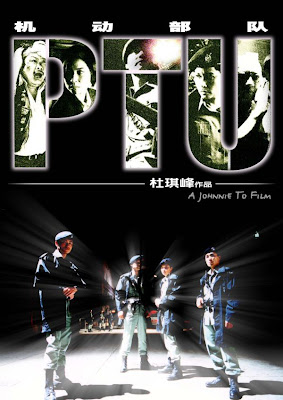 The alleyway where Lam Suet loses his gun, caused some real frustration for me across three different visits to Hong Kong. Its a great moment in the movie and I thought it would make a cool location to visit. I knew it was in central, even though much of the rest of the movie was filmed in Kowloon, and even the scenes around this one are set in Kowloon, but thats Johnnie To's creative Hong Kong geography for you!

I did actually find the alleyway on my first try, but I dismissed it as being the wrong place and kept looking, something didn't feel right about it. Second time I came to the same place but again decided it wasn't right, it must have been how much different it looked in the day time against on film that threw me. Third time around I actually watched the dvd again while in HK and ventured again in the dark and sure enough it was the same place I had been before, how stupid did I feel?

It felt great being there at night, but it proved difficult to get a good shot as the metal sidings on the building played havoc with the camera flash. 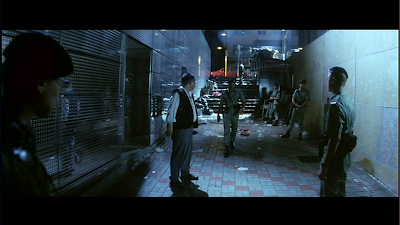 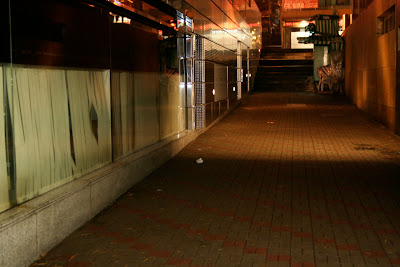 Another location I found, is featured in the film just after the beating of the suspect who has to resuscitated. Looking up from Cameron road to Tom Lee music on Cameron Lane in the heart of Tsim Sha Tsui. This is a very busy area and even at around 11pm I had no chance of getting a shot without anyone in it! 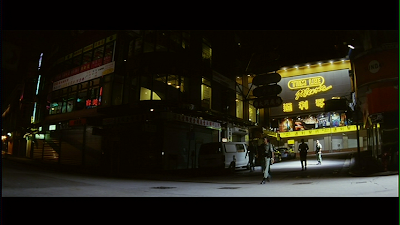 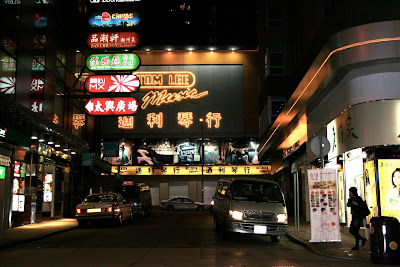 I also looked for the China cafe, which features prominently in PTU but has also been used in at least one other movie, Beast cops if I remember correctly. I couldn't find it but thanks to this page it will be easy next time.
Posted by A hero never dies at 7:16 AM

Great post... those screenshots look amazing, I must try to get to Hong Kong someday. I'm a Johnnie To novice, I've only seen Exiled and Mad Detective, but I will try to track PTU down - that night time photography really does look incredible.

Thanks Wes, I'd highly recommend Hong Kong and PTU! I'm kind of jealous that you have so many more great To movies to see yet.

Now PTU is one great flick. Why can't HK make such films these days?

It doesn't get the credit it deserves really, it has to be one of the best Hong Kong movies of the last decade.

I believe that if you go near the Milkyway Image office in Kwun Tong you can see the bank from the beginning in Running out of Time, but it's been way too many years since I've been there.

But at the time it did strike me that they just go down the street from the office to shoot some of the stuff. Pretty amazing!

Thanks Danny and welcome to the blog, it's great to get comments from newbies!

I'll be sure to check that bank out next time I'm there, which hopefully won't be too long.