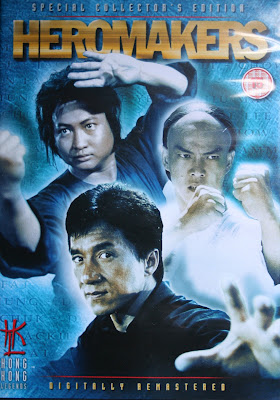 Heromakers is a documentary about Hong Kong movie stuntmen, running 71 minutes and featuring a mix of talking head interviews, behind the scenes footage and clips of stunts from the actual movies. Some of the stuntmen interviewed include Jude Poyer, Chin Siu Ling, Chin Kar Lok and Yeung Ching Ching, others featured but not filmed specifically for this film are Sammo Hung and Jackie Chan. 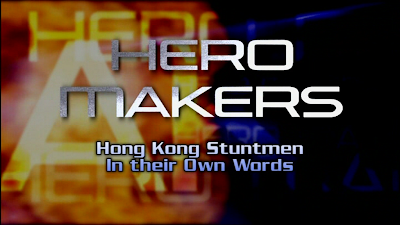 The Hong Kong stuntman association is discussed at length which is an organisation set up by stuntmen for stuntmen, since the decline of the Peking opera schools such as the like that Sammo and Jackie attended, the association provides training in the skills a stuntman needs to have to be a modern day "action actor" as they like to be known, since they no longer just work as stuntmen, they learn more skills so as to be very versatile around the film set. The HKSA is not only responsible for the training program, but also more day to day issues such as safety and ensuring the stuntmen are paid fairly and have insurance, important in this line of work I guess! 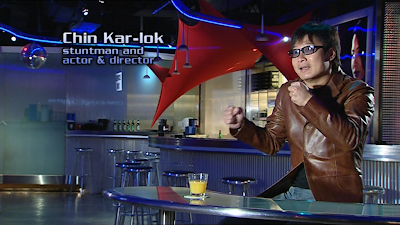 The best parts of the documentary are when the stuntmen start telling anecdotes about the films they have been involved in and the stunts they have pulled off, as well as talking of working with the likes of Sammo Hung. Great emphasis is put on how important the camaraderie is between stuntmen, and the familial bond that grows. 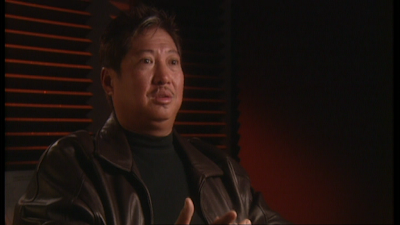 Finally they cover injuries they have sustained during filming, there is some pretty nasty stuff here, including Chin Kar Lok talking about his accident during the filming of Eastern condors, where an explosion as he jumped from a boat burned his arms so badly that when help arrived to lift him out of the water, the skin slipped off his arms as if gloves were being pulled off!

Also on the Heromakers dvd are 32 Hong Kong legends trailers and a feature about how HKL remastered their dvds.

Heromakers is a fascinating watch and with all the clips from the movies its like watching a Hong Kong greatest hits reel. Highly recommended.

If you can play region 2 dvds, you can pick this up on Amazon.co.uk for 1 pence plus postage.
Posted by A hero never dies at 4:15 PM

Wow! Once again you beat me to the punch! I was going to do a review of this as it's on the HKL double-disc of RED WOLF, and I just recently rewatched both (the film and the featurette). Nice work! :)

Nice. I recently got this and it's in my 'to watch' pile. The running time immediately pushes to the top of the pile. Really looking forward to this.

Have you seen the Robin Shou doc RED TROUSERS? It's in the similar vein, all about HK stuntmen, and it's a pretty nice watch. Here's a buddy's review:

When I first glanced at the DVD cover I thought "Allstar line-up!" then my excitement dropped when I realized it was a documentary. Oops. It looks interesting though.

Funny you bring up Eastern Condors as I've just received my copy of that in the mail. About time I replaced my old crappy non-anamorphic hong kong dvd of it. I also recently got a blu-ray player that can play all regions of DVD and blu-rays, so I may take a look at this too.

Mike. How is Red wolf, I've never seen that?

A. Its worth a watch if you can get hold of it, congrats on the blu ray player, what is/was your first blu?

All my blu-rays have been gifts so far, some which I've received months if not years ago. The first was a copy of Bottle Rocket on blu which my sister picked up for me from a DVD store that was going out of business. (I didn't know what they had there so I just asked her if she found any Criterions which were going for $5 a pop!)

The second was a mild gag-gift from my fiancée of Showgirls as I was trying to convince her that Paul Verhoeven was a good director. She returned in kind. I'm trying to save some money currently, but I am eyeing a few blus from YesAsia currently. What was yours?

Bottle rocket is a great one, love that movie and I must pick up the blu myself. I haven't seen (and don't think I ever will) Showgirls but Verhoeven is awesome, Starship troopers and the mighty Robocop in particular.

I can't remember exactly (I had already bought into Hd-dvd, my first of those was Serenity) but I have a feeling it may have been Crank.

Can't believe it wasn't an HK movie Mike! That really is amazing.

My one and only Blu is the Criterion Chungking Express. And I don't even own a Bluray player =P

Ah! I bought the DVD of that one Kingwho?! I got it from B&N when they were having their 50% off sale. I also learned how long it takes for them to ship things to Canada...

There's a nice easter egg on the DVD that has the Hong Kong trailer for Chungking Express. I'm not sure it's on the blu-ray thoughg...hard to hide these kind of secret things with their menus!

Kingwho? What a film to start another collection though? Maybe you could get a blu player as a wedding gift?

A. I'm going to be doing a Chungking post soon, its got to be in the top five ever for me!

I think I can pick up a blu player rather cheap nowadays. Not an all-region one, but something respectable.

Looking forward to your thoughts on Chungking Express. It is my ALL TIME FAVE HK movie. I even have a tattoo of the title on my inner forearm! =)