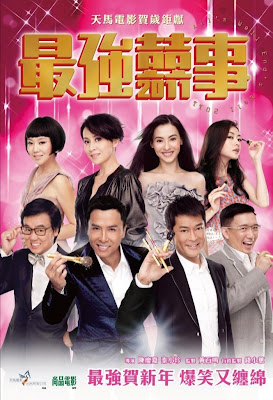 After I Love Hong Kong, Alls well ends well 2011 is the other big lunar new year comedy from Hong Kong for this year. Its another entry in the Raymond Wong's long running Alls well series that has a chequered history to say the least. The 2011 entry stars Louis Koo, Donnie Yen, Carina Lau and Cecilia Cheung and was directed by Chan Hing Kai and Chun Siu Jan. 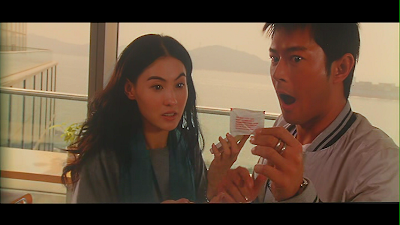 The plot revolves around ex makeup school rivals Donnie and Louis coming together to work for a Chinese cosmetics company called Beauty, Donnie as a salesman and Louis on the board. Donnie is pining for his first girlfriend Carina Lau, while Louis who acts gay to get away with massaging women, becomes attracted to frumpy (Yeah right!) Cecilia Cheung, thats it really, lots of other stars pop in and out, most notably Chapman To as super rich Mr Smoothie, and there really isn't much more to it.

One of the main jokes of the movie is the idea of Louis and especially Donnie playing cosmetics experts, why this is such a joke considering how much make up they use is lost on me, they wear more than most women!

What is there really to say about an Alls well ends well movie? Its seems stupid to criticise it in terms of a conventional film, so what I will say is that it outstays its welcome by a good twenty minutes, but that it just about gets by on the strength of its stars. Louis Koo is good, although the feyness did start to grate after a while, Donnie Yen is surprisingly good and Raymond Wong is Raymond Wong as you would expect. Carina Lau looks pretty without really having anything to do and Cecilia Cheung does well in her first role for years, again without having anything much to do, I have to say again though frumpy, really? Chapman To steals the film along with most of the best gags, without him I wouldn't have enjoyed it half as much as I did.

Your mileage may vary from Alls well ends well 2011, I admit I'm not the intended demographic for this movie, and its far from great but it did make me laugh a few times, and it has some tender moments amongst its artifice. Big fans of the stars and/or series will probably lap it up, as for me I'm happy that I don't regret watching it.

Coming off of watching 72 Tenants and I Love Hong Kong, this was rather boring and lacking any kind of spark or energy. Chapman was definitely the best thing about the film and I also enjoyed the brief send up of WKW's The Grandmaster. There was also way too little of Carina Lau. I also agree that it was bloated a good 20 minutes. This was a clockwatcher for me.

Yeah compared to those two you mention its pretty dull, but as far as the AWEW series goes its not that bad, even if it is only for the stars!

It's interesting to read the reactions on this thread as well as in the blog entry itself because while I think that "72 Tenants of Prosperity" and "I Love Hong Kong" did do better at the box office, I have quite a few Hong Konger friends who preferred "All's Well Ends Well 2011" to those two other movies.

For me YTSL its the lack of plot that is the main problem with AWEW, and while the other two films aren't exactly Shakespeare they do have some sort of story for the humour to hang on. Did your friends say why they prefer it?

I think my friends preferred "All's Well End Well 2011" because, as far as they concerned, they got more laughs from viewing it. Also, they and I agree that there's more energy throughout it than "I Love Hong Kong" (which I also love).

Re lack of plot: hmmm... with "All's Well Ends Well" series of films, you know you're going to get couplings and and a conclusion where all the main characters wish the audience Happy New Year and such. Put another way: it's a classic Chinese New Year movie!! :b

Thats very interesting as I found AWEW to be lacking the energy, vitality or spark it really needed, even with the stars it had at its disposal. As I said in the post though, I'm not really the target audience for a film like this!

What I truly enjoy about Lunar New Year comedies is that they are esoterically Hong Kong. They are made for the people, the community of Hong Kong. It's a warm and loving hug that I really feel a part of as an appreciator of HK's cinema. It is so well thought of by me. These aren't films geared toward a global audience or even a Mainland audience and it's a part of the old HK cinema mindset that is missing in today's films.

Couldn't agree more Kingwho? That mindset is what I'm looking for from any Hong Kong movie I see.

Some Chinese New Year movies in recent years have tried to cater to Mainland China -- cf. "Mr and Mrs Incredible" this year. But agree that the best Hong Kong ones are the ones that are quintessentially Hong Kong. I love the experience of watching Chinese New Year comedies in a packed cinema in Hong Kong. Usually, I prefer to watch my films in uncrowded theaters but there's something really great about mass laughter caused by a joke that works on screen. :)