A new trailer has been released for Wilson Yip's A Chinese fairy tale, better known as the remake of the Hong Kong classic A Chinese ghost story. The movie stars Louis Koo, Yu Shaoqun, Liu Yifei and Kara Hui.


I'm not sure what to make of this film, on the one hand I don't like the idea that such a classic is being remade, but on the other hand parts of the trailer look really interesting and from the stills the production design looks excellent. Wilson Yip also seems keen to distance the film from being classed as a remake, Yip says its a retelling of an old story.
One of the main things bugging me though is Louis Koo in the Wu Ma role, of all the actors to choose from, surely an older actor is required for this role, how good could Anthony Wong have been in the role? 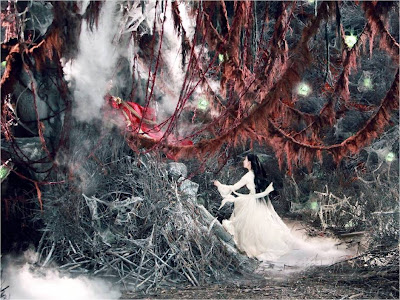 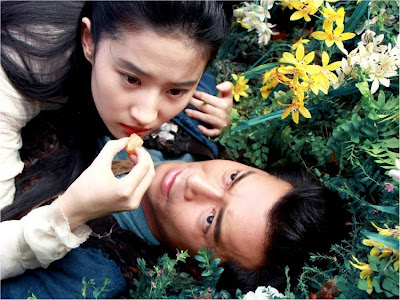 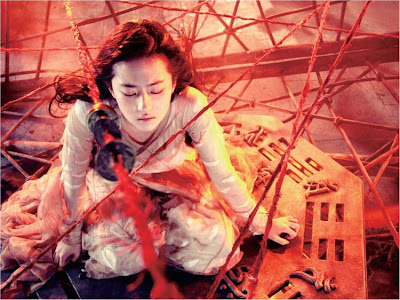 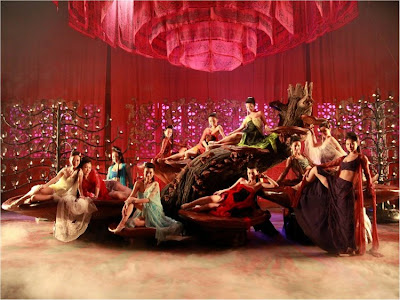 I think these stills look at the very least interesting, and so maybe it won't be the disaster it could have been. As long as they don't overdo the CGI, then it could be pretty good, maybe! I guess we'll see soon as the movie is due to be released in Hong Kong at the end of April.
Posted by A hero never dies at 4:09 PM

Though remakes are always a conundrum for the fans, A Chinese Ghost Story was itself a remake (of Li Han Hsiang's Enchanting Shadow, 1959) and the literary work it was based on (Pu Song Ling's "Nie Xiao Qian") has been the basis for countless variants on the tale over the (cinematic) decades.

Thus, just look at it as yet another version of a well-told story -- or, as the old Hex Errors go: "just take it as peanut!" ;)

On the plus side of remakes, it sometimes mean that they re-release the older film on DVD (or maybe even blu-ray!). Failing that, it will at least remind people about how good the older versions of the films really are!

I despise any and all CGI but this looks really bright and wonderful. I don't usually mind remakes. If you prefer the original, then just don't watch the new one. Simple =P

That being said, I trust Wilson Yip and the trailer looks decent enough to give the film a fair shot. I also prefer the 1987 version but, what the hey?!

I'm always up for something new, and this one looks really good (to me). Sometime back in the nineties I decided that, if I was going to cling to "favourites" as canon, then I was going to severely limit my viewing choices. Plus, CGI doesn't bother me at all - just another aspect filmmakers use to tell a story.

But hey, that's just me and I don't expect everyone to be the same. Every movie-lover does what works for them, and keeping abreast of changes and natural evolution works for me. ;)

Interesting comments from all of you, I suppose I do consider the original as canon, it was one of my earliest favourites of HK cinema. I just think it will be hard for Yip to do a better version of the story, if he can add something new then that is all I am looking for in a remake/retelling.

I recently rewatched the original on the blu ray that just came out and it really holds brilliantly, unfortunately the blu didn't look much better than dvd.

As for the cgi, I'm somewhere in the middle between Kingwho? and Mike, it can be a great tool to enhance a film in any number of ways, but if it is done badly or used too much it completely takes me out of a movie, Legend of Zu anyone?

Wilson Yip's film certainly shows enough quality to make me keen to check it out, hopefully it will be really good and inspire people to seek out the original and more!

Couldn't agree more to the blogger's opinion about the actor choice for the Marshall Yan role. Why such a young chap as Louis Koo? Anthony Wong also came to my mind before I read this blog and Sonny Chiba would also have been an option. Today's HK cinema seems to be all about youth...

Yeah, Sonny Chiba would have been a cool option, but he's not quite as pretty as Louis I guess!

May contain spoiler: the reason Louis was cast is because his character is completely different from Wu Ma's character. He's actually the main love interest for Liu Yifei's character.

Anyway, the film isn't that good. The modified plot could have been interesting if the focus is completely changed to Louis' character as opposed to being split half and half between his character and the scholar character.

Moreover, apart from Louis, none of the other actors can seem to act that well, which is a disaster for a film that requires you to sympathize with the protagonists.

Nibehlung, thanks for your comment, it's a shame you didn't like it more, I'm still waiting for the chance to see it.