Takashi Miike's 13 Assassins is available now from Amazon as a pre-theatrical rental. No idea how long it will be available for, as it starts its theatrical run in the US from the end of April. It feels like I've been waiting forever for the chance to see this movie, and the UK release is not until May 6th. Its also available to pre-order from Japan on dvd and blu ray, but it is not due to be released until May 27th and no word yet on if it will include English subs. 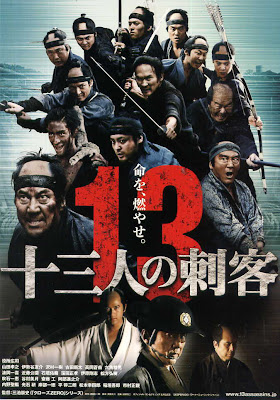 In the US, it's on Comcast's On Demand service as a $9.99 same day as theater rental.

Have you given it a try Glenn, is it something you are interested in?

I am so far behind on Takashi Miike's films, I wouldn't even know where to begin.

I'm not a big fan of his more extreme stuff, but I do love The great yokai war, and the idea of a seven samurai tribute from him has me all giddy!

I'm excited about this too! I hope it comes to my town. The owner of one my local theaters is a big Miike fan and they've shown his Sukiyaki Western Django and Audition and even Visitor Q before.

I've seen it and its excellent, look for a post soon.