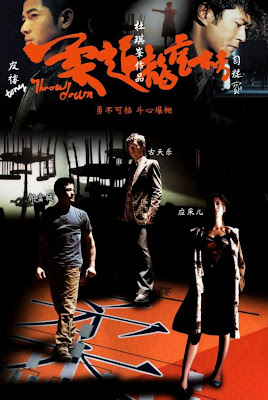 At least until the release of 2008's Sparrow, Throwdown, often referred to as "that judo movie", was Johnnie To's most personal film. In interviews since, To has stated its his favourite of his own movies. To dedicates Throwdown to Akira Kurosawa, and the movie features references and themes which echo the Japanese master filmmaker, in particular his directorial debut Sanshiro Sugata which, like Throwdown features a plot based around the Japanese martial art of judo. A tv series was also made based on the character and the theme song from that show features prominently in the film to great effect.


Szeto Bo (Louis Koo) is the manager of the After hours bar, he is perpetually either drunk or hungover, addicted to gambling and is in serious debt trouble, he has just about given up on life. Its very much a case of squandered talent as he used to be the golden boy of the judo scene, but on the day of his biggest match he walked away, never to fight again.


Tony (Aaron Kwok) is a drifter, he travels around looking for the best judo fighters to measure his skill against, Tony knows of Szeto Bo's reputation and wants to fight him, he finds Szeto at the bar and challenges him to a fight but Szeto is drunk, so Tony waits for another opportunity.


Mona (Cherrie Ying) dreams of making it as a singing star in Hong Kong, having already failed to do so in Taiwan, she tries the After hours bar for a singing gig. Szeto Bo strings both Tony and Mona along, keeping them both hanging on while dragging both into helping him steal money from gangster brother Savage (Cheung Siu Fai). Master Cheng (Lo Hoi Pang) and his son Jing (Choi Yat Chi) run the struggling dojo where Szeto learned his judo from Master Cheng, which without new students will have to close. Lee Kong (Tony Leung Ka Fai) is the judo master who Szeto Bo stood up two years ago.

Without giving anymore of the plot away, events happen with bags, money, a balloon and shoes. Ostensibly a tale of redemption and being true to your dreams, describing the plot of Throwdown cannot do the film justice, the story is secondary to the interaction of the off kilter characters and perhaps more importantly the pure cinematic joy poured into the technical aspects of the filmmaking.

Throwdown is an unusual film, and your mileage will vary depending very much on how willing you are to enter Johnnie To's world. Many of To's movies seem to share a world where it would not be unexpected to see a crossover of characters across films, for example Anthony Wong's character from The Mission, could conceivably appear in the Election films. Given the repetition of cast and crew To regularly brings together in his movies, this helps create the feel of a relatively consistent world in where his stories can be told, perhaps the biggest asset in achieving this is regular cinematographer Cheng Siu Keung. Inevitably this approach has its plaudits, but also leads to criticism, in that To keeps making the same movie over and over, recycling the style, actors and stories from film to film.


This is a criticism that cannot be levelled at Throwdown however, the film it feels most akin to is P.T.U in look, but its quite distinct from the darkness at the heart of that film. Throwdown's Johnnie To world resembles the P.T.U version of Hong Kong in that its a world of shadows and darkness, with mostly deserted streets illuminated by specific spots or pools of light, but whereas in P.T.U brutality was as important a communication tool as speech, in Throwdown it is the much more positive force of judo that is important, where characters inability to reach agreement results in the grappling of clothing, before bodies hit the floor and where respect is earned and given.

The tone of Throwdown is much less cynical than we usually see in Johnnie To's worlds, the messages and themes he tries to get across may be simple but they work effectively for this film, the difficulty is to actually enter this world. These days much is made of films and tv that take place in alternate worlds setting up rules for what can and cannot happen, To does not set up anything to suggest why people just start grappling and throwing each other to the floor, and for audiences used to having rules and reasoning, this can be disconcerting and off putting, but if you accept this, you then get into the rhythm of the characters and you won't look back.

The three leads all put in creditable performances, Louis Koo being very good here, one of his best roles for me, again like the film itself his performance is very stylised, and takes a little getting used to but as the film goes he gets better and better and on further viewings his acting looks even more nuanced. Aaron Kwok does well as Tony, he really goes to town on the judo scenes and he has just the right level of enthusiasm. Cherrie Ying, although slated in interviews by Johnnie To himself, does very well as the wannabe starlet, how much of this is actually down to her and how much to To's decision making is interesting, as To suggests parts of the story were cut as she wasn't capable of delivering what he was looking for.

The most enjoyable aspects and performance in Throwdown are from the ancillary characters, with special praise for Cheung Siu Fai as the hilarious Brother Savage, the overly competitive gangster, whether punishing his own runners for being late by cutting them with a stanley knife while playing an arcade game or intimidating a small child into tears during a game of air hockey, he is an inspired addition to the Johnnie To world and one who I would love to see in another movie.
Lo Hoi Pang as Master Cheng is good, and Calvin Choi Yat Chi, his man child son is excellent bringing genuine emotion to the film, as well as comedy. He also sings the Sanshiro Sugata theme song I mentioned before during all the big judo set pieces. Jordan Chan has a small cameo as Mona's sleazy manager, and gets a little Throwdown action to boot, but the big cameo in the movie is Tony Leung Ka Fai, he's excellent and brings real gravitas to Lee Kong, he commands the screen in every scene he is in.


I can understand why Johnnie To picks Throwdown as his favourite of his movies, it feels like the movie where everything really comes together for him in terms of filmmaking technique. Throwdown is without question for me one of the best looking Hong Kong movies ever made, every shot is fantastic. The use of long shots, cinemascope framing, depth and focus is outstanding, and given the events in the movie the focus is very important. Much of this is down to cinematographer Cheng Siu Keung but To always seems to know exactly what he wants, particularly with actors but I'm sure this extends to the look of his movies. 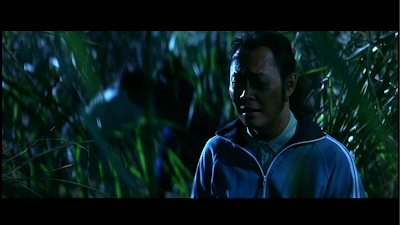 The dvd viewed here is the Tai Seng two disc edition, it was also available as a single dvd, that edition is a port of the Panorama HK dvd, this two disc version splits the extras (identical to the HK version, including a 40 minute interview with Johnnie To) onto a second disc. The first disc is where the differences are, the subtitles for the film have been retranslated and are much better than the ones on the HK dvd, the songs featured in the movie are also translated, including the tv series theme, this in particular is welcome. The biggest addition is an audio commentary by Ric Meyers and Frank Djeng, the track is quite entertaining, but not overly informative and there are quite a few mistakes. I enjoyed Djeng's comments much more than Meyer's, this was the first commentary of his I have listened to and not only is he a terrible name dropper, he doesn't seem to have done much research before recording and he has some questionable opinions, such as The Mission is "deadly serious", P.T.U is "whimsical" and most unbelievably Meyers asks if Throwdown was shot on video, given the look of the film I found this incredible and had to rewind just to make sure I heard it correctly!
The video transfer looks identical to the HK dvd and looks fantastic, there are a few scratches and blemishes but the disc copes well with the films inky blacks, shadows and vibrant colours. 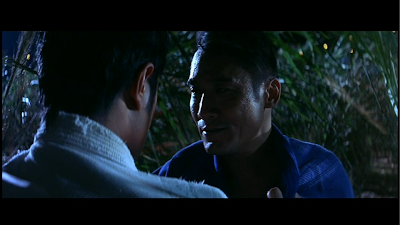 Throwdown will not appeal to everyone, the film is just too off kilter for that, despite having a simple story and a straightforward message. For me, this beautiful looking film improves with each viewing, and I'm eagerly awaiting a blu ray release.
It would be easy for this film to be lost amongst the genre films of Johnnie To, its crucial to remember how much of a milestone Throwdown was for him artistically, and its importance in his career should not be underestimated.