In Faster Dwayne Johnson is back where he belongs in a hard R rated action film. Directed by George Tillman jnr. Faster is another entry in the revenge movie cycle. 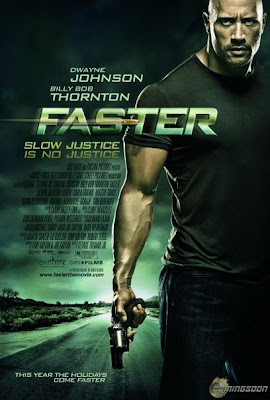 Johnson plays the driver, after serving ten years in prison for armed robbery, all he wants is to do is kill the people responsible for the death of his brother, who was killed during a double cross after the heist. The driver has a list of names to track down and kill, and wastes no time in going after them. As he kills his way through the list, a junkie cop and a hitman are on the driver's tail. 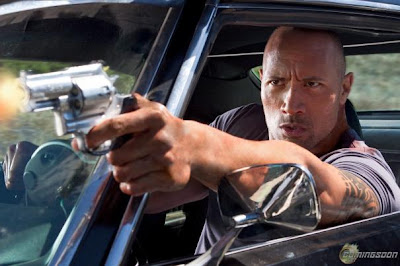 The first third of Faster is very enjoyable and sets up an interesting premise between Driver, Cop and Killer. The very first scene in the prison is perfect, introducing Johnson as a real hard ass, the driver chats with the prison warden (a nice cameo from Tom Berenger) and we see some of the injuries he has inflicted on other inmates as they have tried to kill him during his ten year stay. Within minutes of his release he has the list of names and sets off down the long and dark road to revenge.
The Cop played by Billy Bob Thornton, picks up the trail of The Driver along with fellow cop Carla Gugino and The Killer played by Oliver Jackson-Cohen is hired to kill The Driver before he can get to everyone on the list. 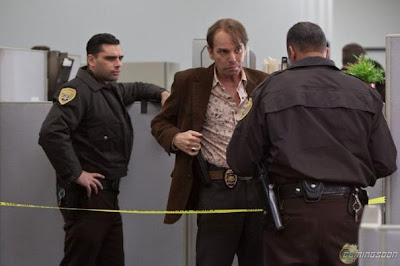 Unfortunately after the premise has been setup so well, it soon starts to unravel and all of the interesting parts are wasted. The Cop is a troubled character, only days away from retirement but a complete mess, with a drug habit that he can barely conceal from his colleagues and a broken marriage he is desperate to repair. Thornton gives his usual good performance and is fun in his role as the sad sack cop and the scenes with his son are some of the best moments in the movie, but Carla Gugino is completely wasted as the "other" cop, it is such a shame that one of the best actresses in Hollywood keeps getting wasted in nothing roles, maybe she needs a better agent. 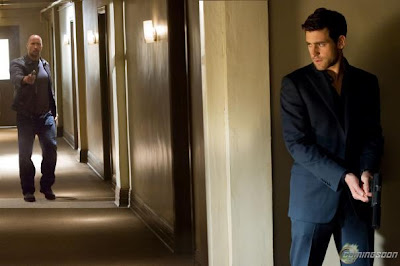 The thing about Faster that really sinks it for me though is The Killer, I really cannot imagine what the scriptwriters were thinking with this character. Oliver Jackson-Cohen who is terrible, with another in Hollywood's line of English actors with awful English accents, maybe its because I'm a limey but he completely took me out of the film, he is just incredibly irritating and every time he is on screen I just wanted someone to shoot him. Its a shame as a satisfying three way stand off between the characters could have been great, but you just finish wanting more focus on Johnson and Thornton.

Performance wise, aside from Thornton, Dwayne Johnson is very good in his role, it really suits his style and in the first half he is very much like a human terminator, saying very little but with real rage in his eyes as he kills without mercy. Inevitably he softens as the movie goes on but he carries it off pretty well. Adewale Akinnuoye-Agbaje (Mr Eko from Lost) has a pretty good role as a preacher who can be heard throughout the film on The Driver's radio and features more towards the end.

Faster is pretty well paced, and there are some really nice shots, but unfortunately like most modern action films, it suffers from the bleached out, high contrast digitally processed look that I've never liked and is looking really old now. I wonder if the studio interfered with Faster as a scene that was in the trailer is missing from the finished film and at various points during the running time it feels like scenes could be missing. The best thing for me about Faster is the Clint Mansell score, who would have thought the man who gave the world "Beaver patrol" would go on to be such a good composer.  Overall, what could have been a really cracking revenge movie is a decidedly average one.
Posted by A hero never dies at 3:52 PM

That is unfortunate that this is an average revenge thriller. Could have been great!

Yeah, it had all the elements to be awesome but blew it.