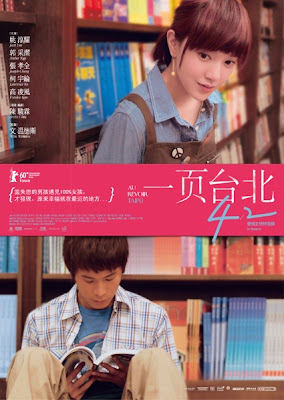 Au revoir Taipei is writer director Arvin Chen's first feature film, a whimsical romantic crime comedy noir, a real genre mash up thats a love letter to cinematic conventions and cliches. Everything combines into a romp thats slight and inconsequential, but pretty hard not to love. 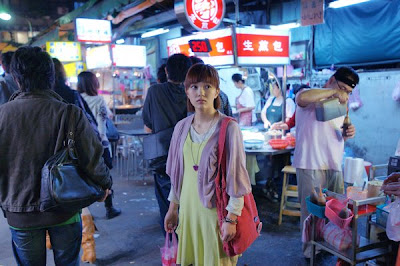 Kai played by Jack Yao, is stuck in Taipei helping out at his parents restaurant, while yearning to be in Paris with his girlfriend, who is there to study. Kai visits a bookstore every night to learn French for when he is reunited with his love, while in the store he attracts the attention of shop assistant Susie played by Amber Kuo, who seems to like him, but Kai doesn't notice as he is too wrapped up in the books. When Kai's girlfriend dumps him he is even more determined to get to Paris and takes up an offer from local gangster Brother Bao of a loan, but as you would expect the gangster wants something in return, he has a mysterious package that he needs to be delivered and Kai gets the job, throw into the mix a cop played by Hsiao Chuan Chong who is keeping an eye on Bao's activities and Bao's own wannabe gangster nephew with his crew of morons. 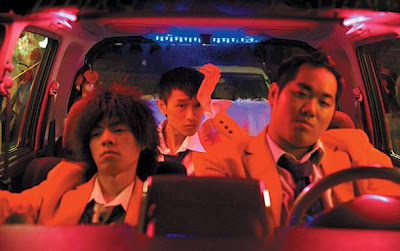 With sinister gangsters, kidnapping and guns you might be expecting something dark in tone, but that is far from the case, a lighter film would be hard to make featuring all those ingredients. The boys in the picture above are the main source of the comedy in Au revoir Taipei, a rag tag gang of real estate agents led by Hong, Bao's nephew who is determined to be a gangster boss, their antics had me laughing out loud. The entire supporting cast is excellent and they make the film as good as it is, Jack Yeo is fine but a little blank, although this is probably more how the character is written. Amber Kuo as Susie is very good, she adds the required cuteness but also shows some steel as events unfold during the night. The biggest asset of Au revoir Taipei is the night time cinematography, this film looks incredible, with really saturated colours that burn off the screen. 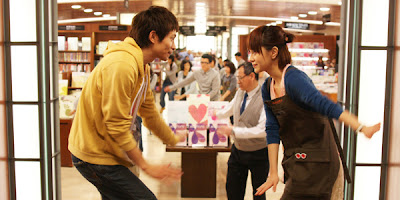 In the end it maybe fluff, but its gloriously entertaining fluff, its the kind of film I could watch regularly without tiring of it and it comes highly recommended. It is released on vcd, dvd and blu ray in HK on the 18th of March, and these are more affordable than the Taiwanese equivalents.
Posted by A hero never dies at 3:40 PM

Really looking forward to seeing this. So, is this like the film Love Actually? A ton of cliche story lines blended together for an amusing time?

I haven't seen Love actually, but I can't imagine it is anything like this, it isn't really like Chungking express but after watching Au revoir Taipei I had the same kind of feeling I get when I watch CE. I don't know if it that will last on repeat viewings to the same extent as CE, I must have watched that movie at least twenty times!

Not sure if you will see this Kingwho? but I just watched Chungking again today and while Au revoir Taipei is great, the feeling afterwards although good, can't compare to CE!

Ahhhh! Good to know, AHND. My all time favorite, CE!!!! It's hard to recapture that magic. I haven't felt the same way about any other film since.