The Mechanic is a fantastic hitman movie from 1972 starring Charles Bronson and directed by Michael Winner, this is a film with an excellent premise that is superbly executed, this maybe a surprise to those who only know of Michael Winner through his recent work where he slipped into self parody as a TV celebrity  (and I use the term celebrity loosely). Recently The Mechanic has been remade into a Jason Statham vehicle, which has had very mixed reviews, I have not had chance to catch it yet but I do like me some Stath, so I may do a follow up to this when I see it. 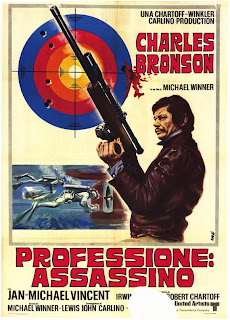 Bronson plays Arthur Bishop, the best mechanic in the game, he isn't the average hitman, he meticulously plans and executes to the finest detail every job that he takes on. Bishop's MO is set up brilliantly in an almost wordless fifteen minute sequence at the start of the film as we follow the planning of the job through to the kill, this really is the kind of film making we don't see much anymore and is one of the best openings to a film I have seen in along time. Bishop works for "The organisation" a shadowy crime syndicate of which you learn little about, but enough to know that they know everything, it feels like the syndicate from Richard Stark's Parker novels ( A series of books I love and highly recommend, the first is The Hunter aka Point Blank from the film of the same name). The organisation send Bishop the details of each target including photos, medical history, routines etc. from this information he sets about designing a kill that will look like either an accident or the result of a medical condition. 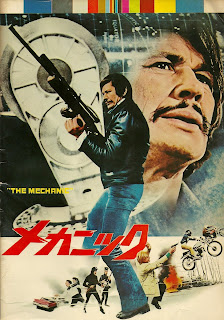 When Bishop is told to kill an old friend, events are set in motion that lead to Bishop taking on an apprentice, Steve McKenna, played superbly by Jan-Michael Vincent, this relationship takes over the film as Bishop becomes mentor and a father like figure to the younger man. The relationship is very interesting between the two characters as we have already seen the two men both have father issues and the way this is explored and the characters developed is expertly interwoven with a number of excellent action setpieces. The character depth and performances are what make this such a good film, it functions as a superb action thriller but also has much more going on than your typical genre movie with two scenes featuring Bishop and McKenna's women standing out as fresh and unusual, I wonder if these scenes will be in the remake and if they are if they will be remotely as powerful.

I only really remember Jan-Michael Vincent from Airwolf but seeing him in The Mechanic makes me think of what might have been for him, he could have been a massive star and a great actor, on to more positive things I do love Chuck Bronson and this has to go down as one of his best roles and best films for me, if you haven't seen it I highly recommend you check it out.
Posted by A hero never dies at 1:01 PM

Can't beat Bronson, the GGTMC covered it well a while back. Good review.

Thanks Charlie, missed that episode for some reason, downloading now.

Excellent review M... it seems to be one that turns up on late night TV, at least its where I saw it many years ago. Watched Bronson in 10 To Midnight just last week. Superb stuff. I love it when the titles have nothing to do with the movies, and 10 to Midnight is one of the snappier ones.

Yeah, that's a really cool title, I haven't seen it I don't think. Most of my Bronson watching was done in the late eighties, must revisit some of them soon.

Mechanic is called here for the discussion and satisfaction of the individuals. Majority of the candidates have been involved in the main stage and situation for the individuals.