Before going any further with this I just want to say that I enjoyed Ip man 2 and that it is worth your time. But ... 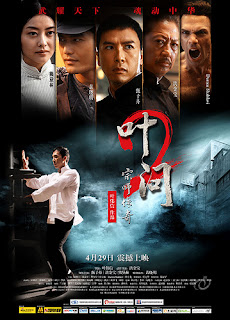 Wilson Yip's follow up to his own Ip man, once again stars Donnie Yen and continues the highly fictionalised story of Bruce Lee's master. The story picks up with Ip man having moved his family to Hong Kong, after his troubles with the Japanese during the war, Ip man and family are facing a different kind of hardship as they struggle to make ends meet, Ip man is trying to establish a martial arts school to teach the Chinese martial art of Wing chun. A school is not a school without pupils and they are proving hard to find for Ip man, when pupils do start to arrive things are not as idyllic as he would like as complications caused by other martial arts schools and more importantly the colonial authorities test the stoic calmness of Ip man.
Sammo Hung plays the master of another martial arts school who is colluding with the British, making all of the schools pay protection money to the authorities so the schools can even exist. When Ip man goes against this, things are made very difficult for him, slowly Sammo and everyone else are shown through Donnie's legendary calm and integrity that extortion, corruption, and racism are bad and that everyone should just give peace a chance and get along with each other, but not until Donnie has beat the shit out of someone first.

Okay, so that last sentence is not strictly true but this film is so oversimplified that it may as well be. The first half of the film is very enjoyable, but even during that time and certainly as the story progresses  Ip man 2 has the feel of something thrown together very quickly to make some quick and easy cash, riding on the back of the superior first film. Where as the first Ip man movie was a quality production with some good acting and genuine emotion amongst the excellent action scenes, Ip man 2 is often unintentionally funny and feels hollow.

The best thing about Ip man 2 is undoubtedly Sammo Hung, both as an actor and as action choreographer. The movies best moments are when he and Donnie Yen share screen time together and the first half of the film is lit up by the fight scene between the two, this scene alone is reason enough to watch the movie despite its many flaws, but the quieter moments between the two actors are also very well done.


Unfortunately the film derails halfway through when it suddenly turns into an Anglo-Chinese version of Rocky 4, only even more jingoistic than that movie. The bad guys, played by two English actors Charles Mayer (the chief inspector of police) and Darren Shahlavi (Twister, the boxer) are just ridiculously over the top and if they had been in acting in a pantomime, they would have been told to tone it right down, never mind in what is supposed to be a serious film, having the bad guys portrayed as such ridiculously evil caricatures takes away any dramatic tension the film was trying to build and just left me laughing at it. The gwailo acting issue has been a problem forever in Hong Kong movies, I do not understand why Hong Kong directors do not seem to be able to get an even reasonable performance from a western actor in a Hong Kong movie. Is it that Chinese mainstream audiences want to see westerners portrayed in this way? For two actual English actors the accents are unbelievably fake, and worse still they seem like they are in the wrong movie, so far out of sync are they with everyone else, in acting style and ability. Two of the worst performances I have seen in a high profile film, ever.


Ip man 2 is a disappointing sequel, not in terms of the action, but certainly dramatically. Sammo Hung's fight choreography is top notch, and if that is all you are looking for, great you will love it. If, however you are looking for the heart that was in the first Ip man as well as the action, then you will probably be disappointed. Bring on The Grandmasters!
Posted by A hero never dies at 5:21 PM

Ip Man 2 was one of the best HK movies I saw last year after Dream Home. I was fully on board with the jingoistic angles, the gwailo shit acting, and the silly dramatic tension. It harkened back to a time in HK cinema, the late 80's/early 90's, where this type of film had a ton of flavor. And it was a nostalgic kinda trip for me. I even cheered in the theater when Kent Cheng showed up on screen =P

Its always good to see Kent Cheng. Maybe I would have enjoyed the cheesier aspects more if it had been a typical Hong Kong quickie, but this was Donnie and Sammo ffs, I wanted better more of them fighting, not a Rocky 4 remake!

i thought ip man died in the first