I recently watched Arnie's Commando and enjoyed it even more than I did way back when I was an impressionable fifteen year old, so when I fancied something with a similar eighties vibe, I plumped for Stallone's Cobra, I saw Cobra on video back in the day, but couldn't remember anything about it other than the tagline on the poster below, maybe that should have been warning enough! 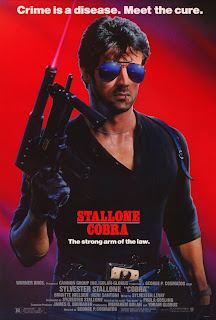 I was hoping to enjoy this as much as Commando, but to be frank the film is an embarrasing effort for just about everyone concerned, the only person who comes out of it with any credit is Stallone and that is just for being Stallone really, he slurs his lines in a suitably gruff and hard manner and handles his action scenes as well as you could expect. It feels like Stallone felt he needed another R rated action franchise and decided to go down the Dirty Harry route, this film owes a massive debt to the Eastwood classic, it even features a couple of actors from it, in particular Andrew Robinson, Scorpio from that film.

The plot of Cobra is based loosely on a novel called Fair game (later filmed under that title) but with added stupidity ( I haven't read the book but it cannot be as stupid as this movie). Stallone is Marion Cobretti a member of "The zombie squad" a team of cops who do the dirty jobs that no one else wants, he is looking for a serial killer, who is randomly killing people all over the city. The most stupid part of the story is it isn't just one killer it is a whole movement who are looking to create "The new world" to do this they kill the weak to ensure only the strong survive, this idea is never fleshed out and is just plain ridiculous. Cobretti is lumbered with protecting a fashion model, when she sees the face of one of the murderers and becomes a target for the supremacists. Cue lots of overlong, boring action scenes not to mention some unbelievably poor acting from actors who should have known better, even a running time of under 90 minutes cannot save this from being a crushing bore, and the less said about the films attempts at humour the better. Cobra needed to be far nastier and more graphically violent to have anything to recommend it at all. 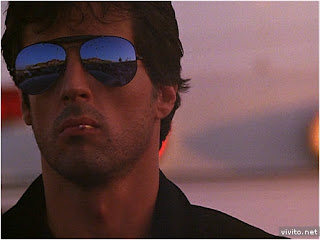 Watching Cobra again now, it has dated so badly, Commando which was made before Cobra still feels fairly contemporary, Cobra on the other hand looks and feels much older and if you compare it to Die hard made only two years later it seems archaic, for an example of just how dated it is, just check out the clip below, I am not a fan of the so bad its good idea but this is hilarious.

Great site you have here! Happy i found it.

It is a hilariously dated movie. Cobra has some classic quotes like: "Go ahead I don't shop here!" and "This is where the law stops and I start - sucker!"

also check out our review:

Funny review Ty, I love that "Go ahead I don't shop here" line, it was the funniest (intentional at least) moment in the movie.

Thanks! Definitely agree with you. Also thanks for following us too!