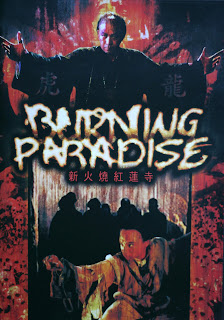 I'm not sure how I missed it but in June last year Discotek media released the 1993 Ringo Lam movie Burning paradise on dvd, I am surprised I missed its release as it is one of my favourite Hong Kong films of the nineties and it is a film that has always been poorly represented on home video, previously the best release was a French dvd that was unfortunately not English friendly. I gave the Discotek release a spin today and it is a revelation compared to how I have seen the movie before, first on a VHS from the original HK VCD release and then the UK Made in hong kong VHS release, on both it was very hard to see anything in the dark scenes. I am therefore very pleased with this release, the image quality is very good, while it was never going to look like a new release considering the films age and budget and the conditions the film must have been made in but what Discotek have achieved is remarkable given that it is a niche release and that money would not have been available for a comprehensive restoration. Some wear is present on the print but for such a dark, dusty and smoky film the detail and compression is very impressive. I think that it must be licensed from the French dvd release but where as that release was PAL formatted this seems to be true NTSC.

Soundwise the dvd features the original language track with English subtitles and is pretty solid, an alternative English dub track is also available, which I haven't checked out as I am not interested but it may appeal to some. A short interview with Tsui Hark is included as an extra on the disc, Hark served as producer on Burning paradise and was asked to direct it but declined as he was working on other projects, but it was he who suggested Ringo Lam as the perfect candidate to direct, he speaks of disagreements with Lam over the direction of the movie and that he just told him to do what he wanted, given the tone of Burning paradise is quite similar to Hark's The Blade, I wonder if Hark put ideas into that film that could have been for Burning paradise originally? A few trailers round out the extras on the dvd.

The only negative I can say about this release is that the sleeve looks really cheap to the extent that I thought it maybe a bootleg version of the dvd, but others have said the same so I guess it is just to keep costs down and obviously the disc quality is more important.

Burning paradise, like its director Ringo Lam seems to be overlooked when people discuss the best of Hong Kong film, maybe having a good quality dvd will go someway to rectifying this.
Posted by A hero never dies at 4:38 PM