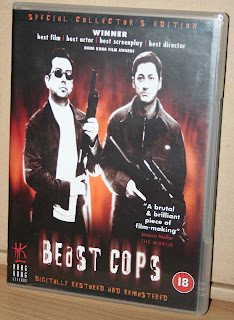 Gordon Chan and Dante Lam's 1998 film Beast cops has a justly deserved reputation as one of the best Hong Kong movies since the 1997 handover, it received eight nominations at the 1999 Hong Kong film awards, winning five of them including best picture.

During the mid nineties the popular Young and dangerous series of films had been king of the box office, and Beast cops was marketed to a similar audience as those films, easy to understand as the films share many genre tropes and have a similar grungy look, this may explain the disappointing box office performance of the film, as Beast cops is a completely different film to that series, it is much more ambitious, and viewers looking for the Young and dangerous kind of action film would have been disappointed with what they got here. Beast cops is punctuated with some action scenes but it is not an action film, it is a character piece focusing on brother Tung played with fantastic skill by Anthony Wong. It has an independent film feel, and seems to have been made almost like a reality show with characters during the film addressing the camera with answers to questions that are never asked, some shots also seem like they were shot guerilla style on the Hong Kong streets, reinforcing the naturalistic feel.

I could go on about how good the film making is, as the photography, editing and direction are all excellent, I could talk about the supporting cast, Roy Cheung and Sam Lee both do very good work with not very much to work with, I could easily bore you to death with just how bad an actor Michael Wong is, although everyone knows that, but all of this pales into insignificance as the only thing to talk about here is Anthony Wong. He completely and utterly dominates the film, it is his film and his alone. 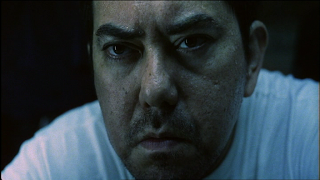 Brother Tung is such a strong presence in his scenes that while watching the movie I almost felt like I was there with him, on the streets of Hong Kong. He takes what could have been a pretty generic cops and triads story and turns it into something else. Tung has to juggle his life between his job as a cop and his position as a brother to the triads, while trying to keep on top of a gambling addiction and get closer to the woman he wants to love, Tung's situation is complicated by the arrival of Michael Wong's character as his straight laced boss and upheaval in the triad gangs caused by a situation that he is implicated in. You can feel the confusion and pain in Tung's head as the moral shades between black and white expand and contract depending on the situation he finds himself in, until inevitably things come to a head and something has to give.

Anthony Wong's performance is heartfelt, funny, ferocious and just plain awesome, turning from humour to desperation, frustration and drug fuelled rage, Tung always feels like a real human being with the camaraderie towards his cop friends and triads, and even tenderness with Stephanie Che's character. This performance is the kind that if it was an American actor in the role, the only one I could think of that could do it justice would be Harvey Keitel, and that is high praise from me.

I just cannot leave the Michael Wong thing alone, how did anyone ever cast him in anything? He hasn't improved over the years either, Overheard proved that. He didn't manage to spoil Beast cops though which I something, and he did really make me laugh with his comedy dancing in the nightclub scene.

I viewed the Hong Kong legends region 2 dvd, and it is a very impressive presentation of the film, the megastar dvd was practically unwatchable on my system, this however looked great and if you like the film it is well worth the upgrade. The dvd extras include interviews with Gordon Chan, Anthony Wong and Stephanie Che and a feature length commentary by Bey Logan with Gordon Chan.

Just in case you didn't get it yet, Anthony Wong's acting raises Beast cops into one of the best Hong Kong films of the last fifteen or so years, an absolute must see.
Posted by A hero never dies at 5:37 PM

I think this is a total "guy movie", i.e. guys love it and women do not. BUT I agree that Anthony Wong was, as usual and maybe especially here, fantastic. And yes, Michael Wong is an utter clod.

Anything interesting from the Bey Logan commentary?

I am a big Michael Wong advocate. Good or bad, his inclusion in a film is usually a highlight for me.

I'm not a woman, at least I don't think i am,but I have to agree with Sylvia. I re-watched Beast Cops a year or so ago and it just didn't hold up for me. I was disappointed w/ the film. I had ascribed greatness to the film when I first saw it but I now think that my initial reaction was based on other HK films released around that time. And around that time, HK cinema was in it's dark days so maybe I just crowned it because it was the best of what was around?

I do like Dante Lam. he is a hit and miss director who most recently hit, IMO, w/ Beast Stalker and Fire of Conscience. His recent misses were The Sniper and Stool Pigeon.

I get that achillesgirl, I asked my wife if she wanted to watch it and she asked if I thought she would like it, I said no, end of conversation. I wonder if any women like it? As for Michael Wong I would go further and suggest that he is evil incarnate, well at leasy as far as acting goes.

Kingwho, just when I though I had a handle on your tastes, you surprise me again, firstly that you aren't a Beast cops fan and second and most heinously that Michael Wong could ever be considered a highlight! Its back to the drawing board for me, do you have anymore shocks waiting?

Michael Wong is like bagpipes: you either love him or hate him but you can't be neutral. I've uncurled my lip a bit in the last year and now view him as a lost puppy who wandered onto a movie set and was put to use. He dumb. But that's okay. As long as he's not playing a rocket scientist.

Great Beast Cops review M. I must track this down, even though I'm too late to the party as usual and the HK Legends is OOP !

It's well worth tracking down, it regularly pops up on ebay and unlike many of the HKL dvds, it's usually pretty cheap.

M. Wong gave his best performance, but that's not exactly a praise. His acting is not annoying with his English quotes since he is more restrained in this movie.

But Beast Cops is a great film with the superb Anthony Wong.

Agreed Lee, I did enjoy Michael Wong in Mad Stylist though! I must be mellowing with my age as I always thought he was poor!

Totally agree that Michael Wong is simply a terrible actor. Unless he's playing weak, spineless characters, he's totally out of his depth.