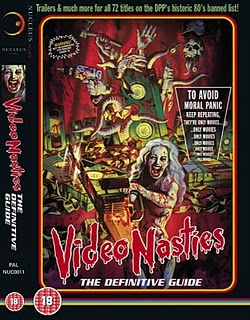 On the Video nasties : The definitive guide dvd set that came out recently in the UK is Jake West's documentary Video nasties Moral panic,censorship and videotape, a seventy minute look at the whole sorry mess. It features many of the main players involved including the MP Sir Graham Bright (responsible for the video recordings act bill) who would have been hilarious if he hadn't had a say in running the country. You really have to see to believe the part where he talks of the research being done that will prove that not only do violent videos harm children but dogs too! I kid you not.

UK filmmakers including Neil Marshall and Chris Smith are featured reminiscing about watching video nasties when they were kids and how the nasties influenced their work and respected critics Kim Newman and Alan Jones are also featured.

On a more serious note the film goes into political territory explaining the state of the country at that time and how the government needed something to deflect the growing unrest, that thing was violent videos and with the help of the right wing media a campaign of misinformation and outright lies were launched which somehow whipped up such a frenzy that all common sense went down the toilet.

If you know the history of the nasties you will probably not learn anything new but it is such a fascinating subject that it is worth watching anyway but if you are new to nasties watch this, enjoy and then seek out the books on the subject Seduction of the gullible and See no evil.
Posted by A hero never dies at 5:53 PM

Nice review. I almost forgot about MP Sir Graham Bright's research into how violent videos could harm dogs... amazingly mental. The government clearly didn't (and still don't) know what they're talking about when it comes to cinema. The BBFC are a joke.

Liam, the dog thing is undoubtedly one of the funniest things ever, you couldn't even write gold like that!

I do feel the bbfc have become a little more realistic in the last ten years or so but perhaps only because they are becoming increasingly out of the loop due to technology.